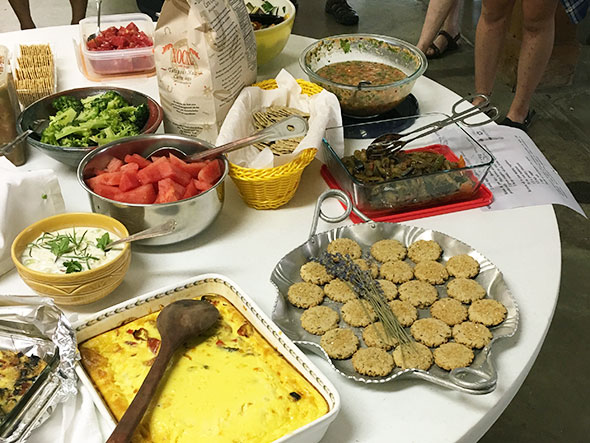 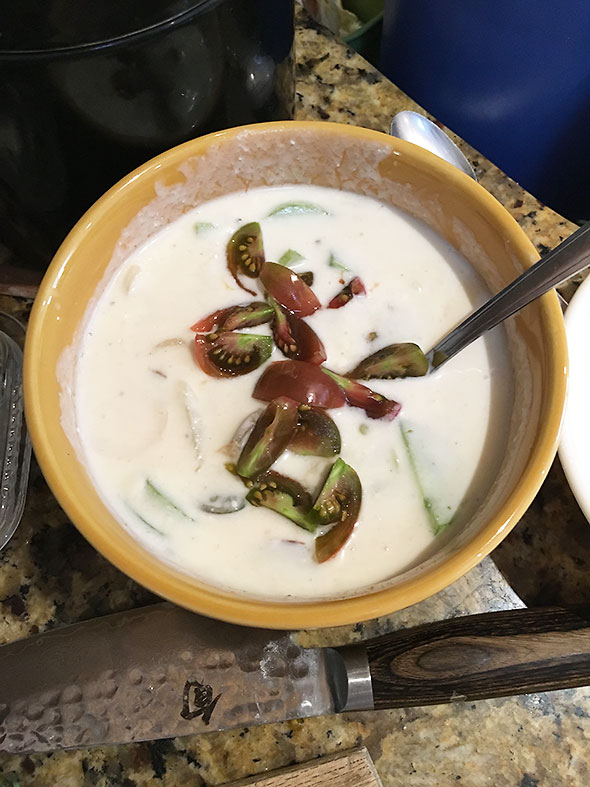 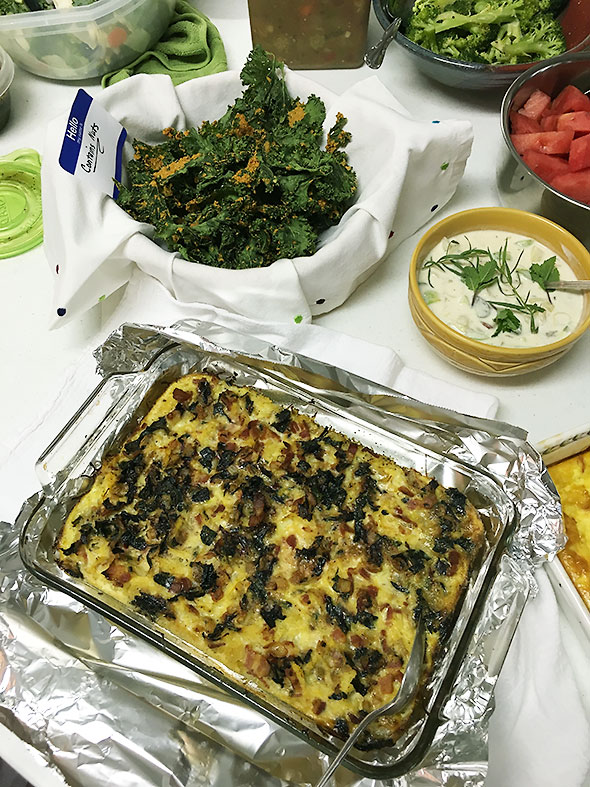 I have been making yogurt at home for about three year’s now. It has become a staple in my diet. I enjoy it with nuts or granola. Often I top it with fruit or micro greens. Sometimes I make lassi.

Now that I’m making yogurt regularly, I’m impressed with how forgiving the flash pasteurization and fermentation processes are. I’ve left the milk on the stove too long—to the point where it forms a high dome of frothy bubbles—and still made a successful batch. Leaving the milk on too long just seems to make less yogurt due to excessive evaporation. Though, on the plus side, it makes a thicker yogurt.

The worst thing that happens is the yogurt comes out with a grainy texture. When a batch comes out grainy, the fix I’ve discovered is to combine the yogurt into a single container then let the whole jug mellow for five days or so. The structure tends to mend itself into the smoother texture we associate with a good yogurt. 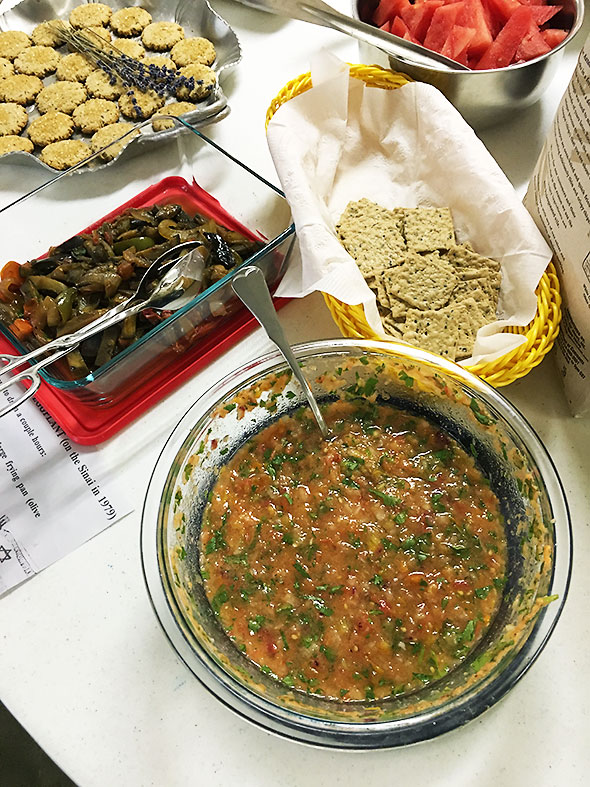 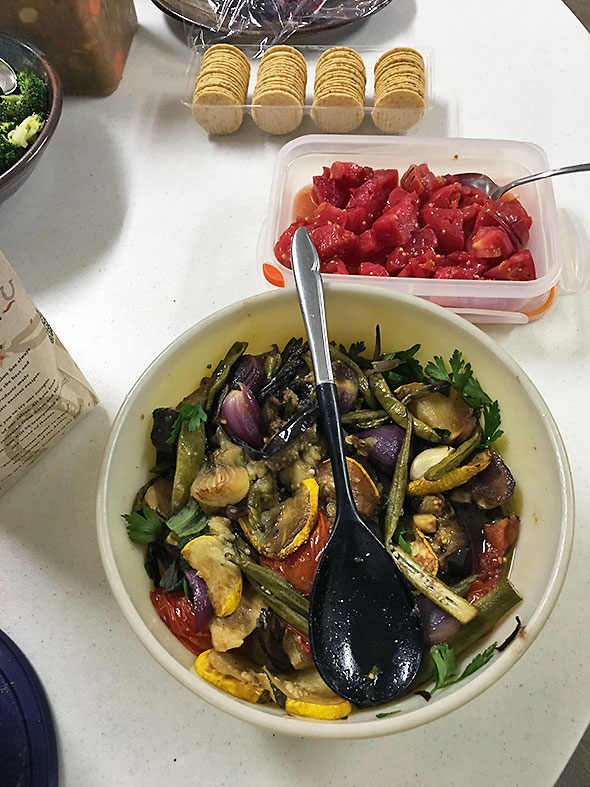 The secret to creating a smooth yogurt is simple: Let it heat slowly and don’t stir the pot. Stirring breaks up the semi-solid gels forming in the milk base. I’ve learned to pour the milk into its pot, let it set as it heats slowly, and allow it to cool unmolested. I skim off any scalded milk, drop in a serving or two of yogurt as starter, and again walk away to let the starter dissipate through the warm milk on its own. The only time that I disturb the contents of the pot is when I transfer the inoculated milk cup by cup into individual containers to ferment.

The smooth texture comes from the milk’s natural cohesion of its protein structure. It builds a seamless gel if left to its own devices. Stir and I disrupt the process that must begin again from scratch.

To make the raita, I start with a smooth yogurt drained through a fine sieve to remove excess moisture. Next I added sautéed onion, a diced salsa pepper, and lots of cherry tomatoes halved. If I had a cucumber, I’d add it chopped to the mixture. I don’t so I substitute pea sprouts instead. I add cumin, salt and pepper to taste. Finally, I dress the dish with mint leaves and tarragon. 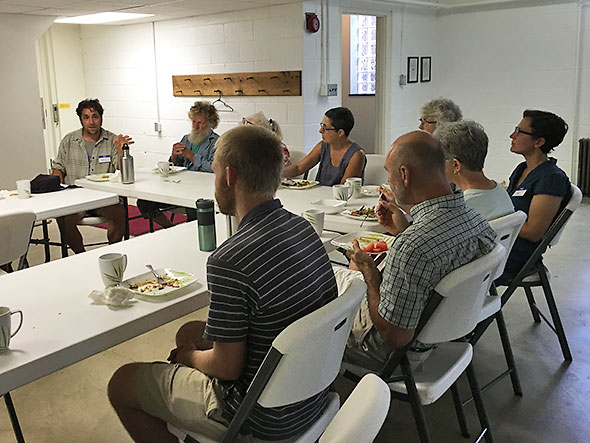 This isn’t a traditional raita but improvised. I add it to the table of homemade foods assembled at the fellowship hall of the Yellow Springs United Methodist Church. Following the local food theme, the dishes ranged from fresh, raw vegetables to cooked casseroles and canned preserves. Everything was delicious but the most striking dish as a silver plate hosting two dozen almond lavender cookies. The aroma of that dish was satisfying in itself. 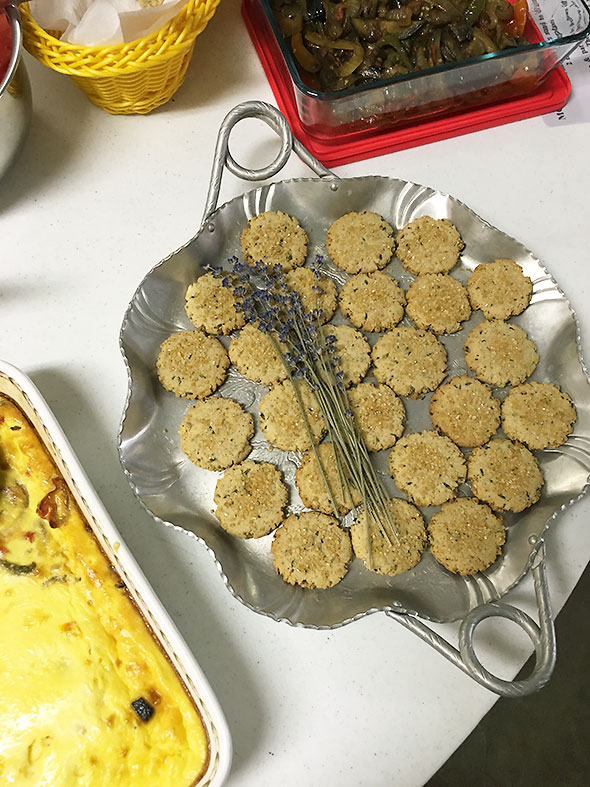 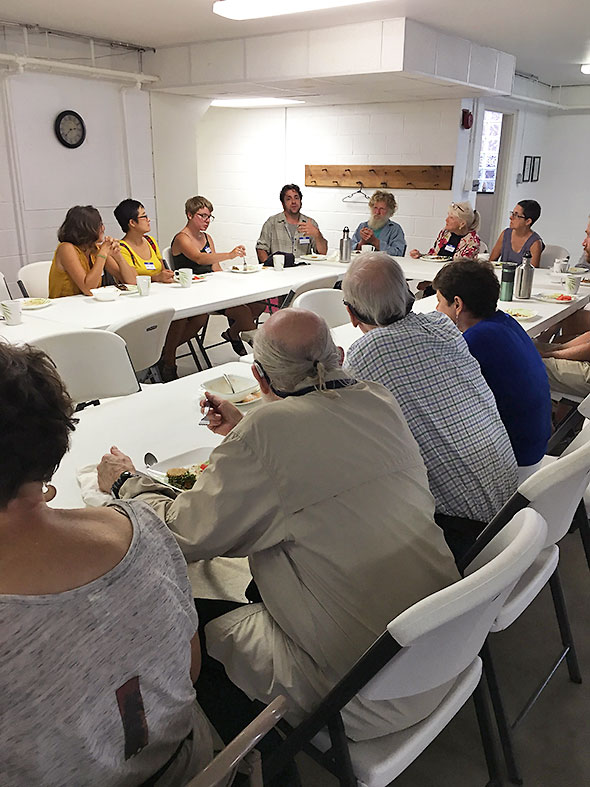 We loaded up our plates and settled in to talk. Susan Jennings of Community Solutions presented plans for a commercial kitchen in the village and outlined meetings that would be held later in the week to organize the effort. Andrew Manieri of Heartbeat Community Farm gave a talk about his circuitous journey to community supported agriculture and sustainable farming practices. Al Schlueter took us back further in time and described his history with the Yellow Springs Farmers Market…back in the day when it was just him and student representatives of the farm on Antioch College back in the day.

Schlueter continued discussing various kinds of preservation: insulating, drying, freezing, and canning. He describe various preservation techniques including methods of keeping root vegetables insulated in the ground so that they could be protected from freezing and harvested in winter. He showed us the dehydration machine that his family uses to process tomatoes; he raved about the low effort, low energy technique that he now prefers over the intense process of canning. He also spent time discussing the batch processing of garlic and fruit to freeze for long term storage. 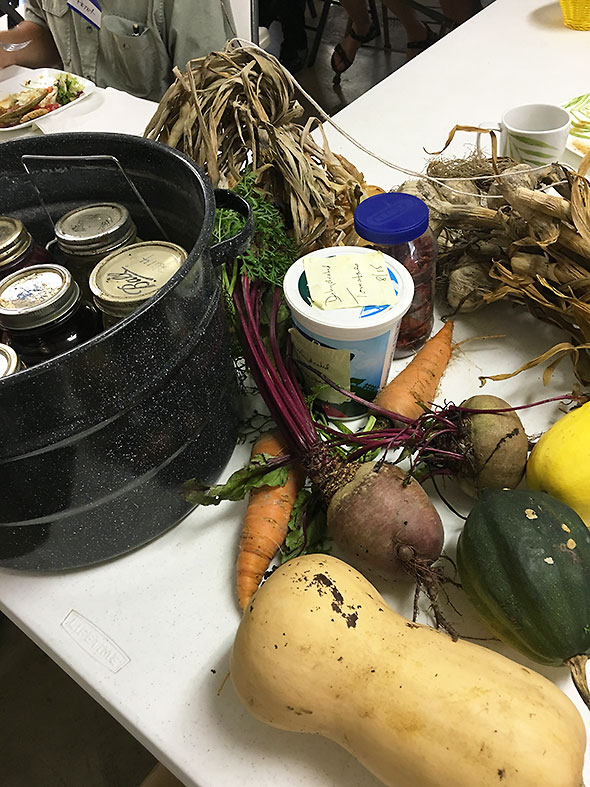 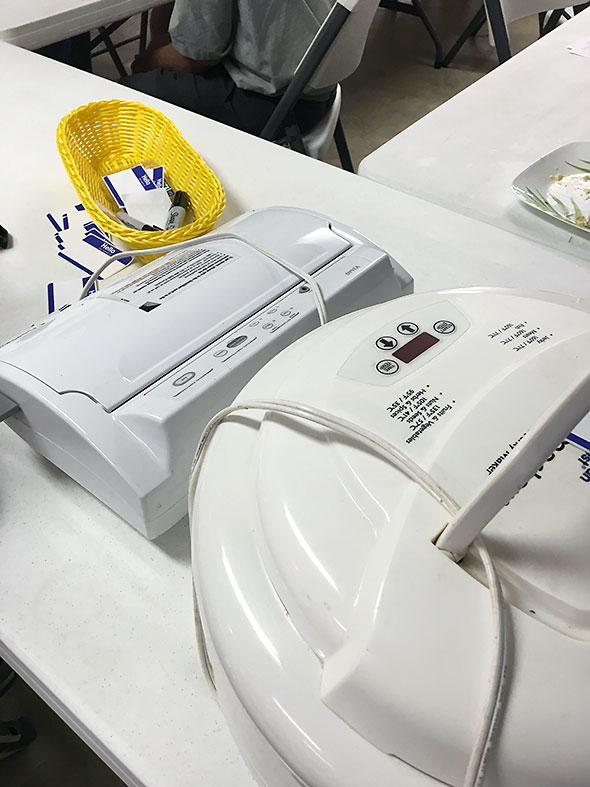 Listening to Al Schlueter, Faith Morgan and I were especially excited by his suggestions chiming in with our own experiences and techniques. Faith uses pressure canning extensively to preserve meats as well as vegetables and fruit. When Al Schlueter showed his ice trays filled with blocks of minced garlic and olive oil, I mentioned how I freeze cubes of squash puree and use the cubes as a substitute for butter.

Fermenting milk into yogurt is also a preservation process. Fermenting preserves the dairy in a more stable form. Fermenting also preserves food in a living form which adds to its nutritional value. Schlueter and the gathered host of gardeners and farmers traded their favored methods of preserving and preparing the fruits of the season. 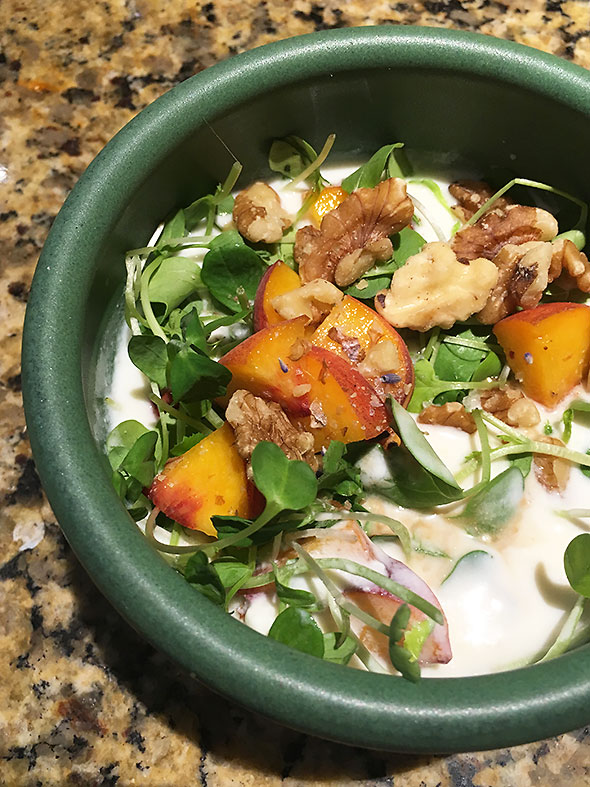 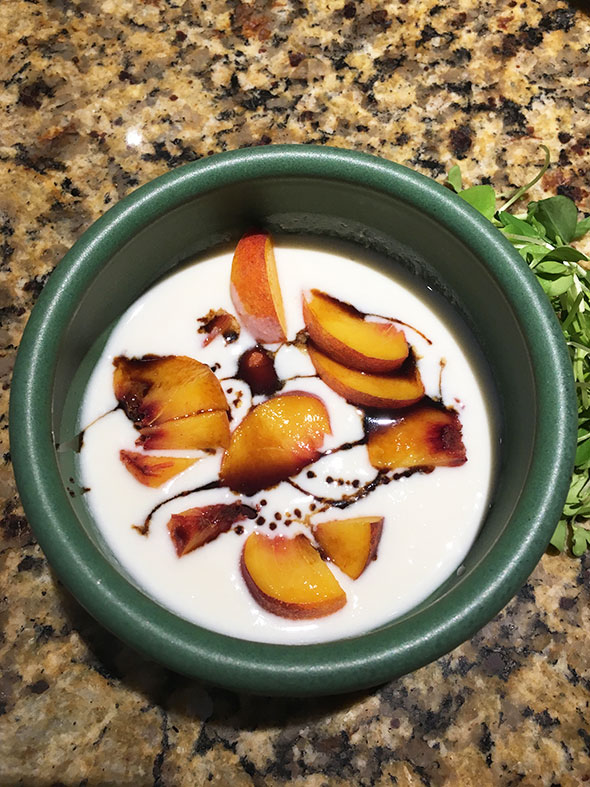 Surprisingly, among all of the dishes at the potluck, it was the dessert that made me rethink how I’d prefer to make my raita…the almond cookies made with local lavender buds. Gifted with the sprigs of lavender left after the plate was cleared of cookies, I infused my next batch of raita with the flagrant lavender buds. Together the yogurt and lavender tasted so exotic. Yet they were produced and harvested right here in our village. Learn more about local foods and enjoy them too at the next community potluck 2pm Sunday September 25 at the United Methodist Church, 202 South Winter Street.