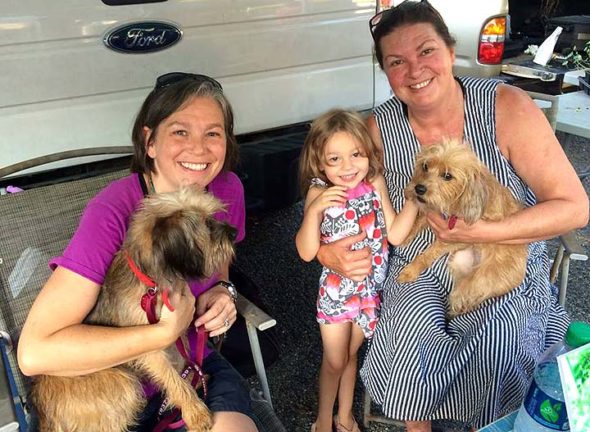 YS PetNet’s Kari Barnes, Faye Wheeler and LaVena Lichtenfels shared a tent with Hansel and Gretel at a recent farmers’ market. PetNet is a local collective of animal foster homes for stray and abandoned cats and dogs. The terriers are two of the animals currently looking for a loving family. To date, the group has successfully found homes for 11 strays, and reunited three dogs with their owners. (Submitted Photo)

Villagers go to the dogs (and cats)

On a recent weekend, two things happened at PetNet’s booth at the local farmers’ market that exemplify why the group was founded. The booth was visited by Betty, the first dog the group found a home for, and then a few minutes later by a young woman who said she and her mother had just found three Corgis abandoned on the side of the road.

Kari Barnes, a member of PetNet, turned her attention from Betty to the alarming report of the abandoned Corgis. The dogs were currently in the backseat of her car and were covered, the woman said. Barnes went to investigate and advised that the dogs be checked for microchips holding the identities of their owners. The dogs were in fact microchipped, and were returned home not long after they were picked up. From taking in strays to adopting them out to loving homes — it’s all in a day’s work for PetNet.

PetNet was founded in May of this year by a core group of four Yellow Springers dismayed at the number of strays in the village. Co-founder LaVena Lichtenfels said the group is a collective of people willing to foster pets, and it uses social media to connect animals with their future families and to return runaway animals to their owners. PetNet does not have a headquarters but relies on the homes of volunteers to house the animals until a permanent home is found. To date, the group has successfully found homes for 11 strays and reunited three pets with their owners; three pets are still waiting to be adopted. Barnes noted that the group only fosters dogs and cats, and cannot take in pets people no longer want.

Betty, a small black terrier, was PetNet’s inaugural dog. Betty’s new caretaker, Chris Wyatt, said that his wife learned of Betty through PetNet’s presence on social media. As soon as he saw a picture of the dog, he knew they were the family to adopt her, he said. Barnes recalled that Betty was missing patches of hair and was hungry and scared when she was found, flinching and shying away from anyone who made a sudden movement. But two months after she was adopted, she was healthy and happy to be out at the farmers’ market. She greeted her PetNet caretakers warmly.

“She’s happy to see LaVena because she fostered her,” Wyatt explained. “Betty is one of the sweetest dogs I’ve ever met.”

Celebrating successful placements such as Betty’s and helping to fund future successes, PetNet is organizing its first annual Dog Day on Saturday, Sept. 17, a fundraiser for the group. Held at Peach’s, whose co-owner, Christine Monroe-Beard, is a PetNet board member, the event will run from noon to 1 a.m. The bulk of the day, from noon to 7 p.m., will take place outside with activities including a beer garden, live music and pet-focused vendors, including a microchipping vendor.

“It’s our big event of the year,” said PetNet co-founder Joanna Wheeler. She added that the group has benefited from an “amazing outpouring of support” from villagers and local businesses. A village-wide scavenger hunt will take place during Dog Day from 1–4 p.m.; tickets are $10 in advance and $15 at the door. There will even be a pet blessing ceremony, hosted by First Presbyterian Church.

Creating a local safety net
One difficult incident in particular helped bring PetNet into being, member Barnes said. A 12-year-old Lab, a family pet in Yellow Springs, had gotten out and was picked up by Greene County Animal Control, or GCAC. The dog was taken to the Greene County shelter and ultimately euthanized after the shelter waited the legally prescribed three days for the family to claim it. Because of the relative lack of publicity accorded stray animals in shelters, Barnes said, the family didn’t know where the dog ended up and made contact one day too late to find it.

PetNet co-founder Wheeler said that incidents such as this highlight some of the unfortunate gaps in area animal policy. GCAC currently posts the animals it has for adoption on its website, but Wheeler said she hopes PetNet can work with the county to better advertise the animals it has available, and to involve more citizen groups in training and caring for the shelter’s animals, preparing them for adoption and thereby reducing euthanasia rates.

The abundance of stray animals can overwhelm organizations dedicated to taking them in, so these organizations often have to euthanize the animals for reasons of space or resources, according to co-founder Lichtenfels. PetNet aims to create a Yellow Springs safety net, reuniting local pets with their human caretakers and placing strays. The group’s focus is on dogs and cats within the village.

“Our mission is to keep them out of the pound,” Lichtenfels said.

According to the Ohio Revised Code, an animal shelter must keep an unregistered dog for three days and post information at the shelter describing the dog and reporting where it was found. Afterwards, the animals may be euthanized. By contrast, registered dogs — such as those with chips or tags — are to be kept for 14 days, with attempts made to contact the owner during that time period. After 14 days, a notice is mailed to the owner, and the owner has another 14 days from the day the notice was sent to claim the animal.

After this period, Ohio Code states that the animal can be destroyed humanely or sold to “any nonprofit Ohio institution certified by the Director of the Ohio Department of Health as being engaged in teaching or research relating to the prevention or treatment of diseases of animals or humans.”

Many animals that come to GCAC’s shelter, which is located in Xenia, are returned to their caretakers, according to Director Harold Brown, a veterinarian, in a recent interview. This outcome is known as “redemption,” he said. Owners may come in to collect pets brought to the shelter, or one of the shelter’s vehicles may return a “redeemed” animal to its home.

For the first seven months of this year, 706 dogs and 509 cats were brought to the Xenia shelter, according to data provided by GCAC. Of those, 329 dogs and only 12 cats were redeemed by their human caretakers. The disparity between dogs and cats reflects the reality that dogs are personal property under Ohio law and perhaps as a result, dog owners are far more likely to look for and claim their canines, according to Dennis McCarthy, GCAC operations manager.

Other animals are adopted; 203 cats and 219 dogs were adopted between January and July, according to GCAC figures. Animals up for adoption are first spayed or neutered, vaccinated and microchipped, according to Brown.

And 211 cats and 115 dogs were euthanized for a variety of reasons, GCAC data shows. Many euthanized cats are sold to a Michigan company that in turn supplies schools and classrooms with animals for dissection, Brown said. The shelter is paid approximately $1.50 per cat. GCAC has sold 155 euthanized cats so far this year, according to Operations Manager McCarthy, roughly three-quarters of the cats euthanized.

“The cats are used as anatomical models,” Brown said. “This practice serves a great purpose for training doctors and vets.”

The shelter does not presently sell live animals for medical research purposes, according to Brown, though this practice, which is permitted under Ohio Code, was previously in place. During his tenure of 12 years, however, “no animals that have left here have ever gone to a research facility,” Brown said.

“Our policy is to do the very best with as many animals as we can,” he said.

It takes a village
PetNet co-founder Wheeler said one measure of the group’s success is that only two pets from the village have been taken to GCAC since PetNet’s formation in May. The group’s focus is specifically on dogs and cats that live in Yellow Springs, although the group has been contacted by people from outside the village and handles these requests as they arise. PetNet is not currently geared up to address the village’s feral cat population, however.

In order to reduce the number of strays, PetNet co-founder Lichtenfels encourages people to stop breeding dogs, have pets spayed and neutered and adopt pets from shelters instead of going to a store to buy them. Summer is a season with a high number of strays, as many animals leave their properties while frolicking outdoors and wind up getting lost.

“I don’t know if Yellow Springs has more strays than anywhere else,” group member Barnes said. “But we stay really busy.”

Lichtenfels encourages the community to get involved with caring for strays, and to help with PetNet’s social media campaign to find permanent homes for the animals the group is fostering. Supporting PetNet is supporting a service to Yellow Springs’ human and animal communities alike, she said.

And both humans and animals seem to be pleased.

“I can’t say enough positive things about PetNet,” said villager Tony Frabotta, whose family recently adopted a dog through the group. “They are great advocates for dogs.”

PetNet can be contacted by calling 372-2044, or by visiting Facebook.com/YSPetNet. The site has pictures and descriptions of the animals currently up for adoption.