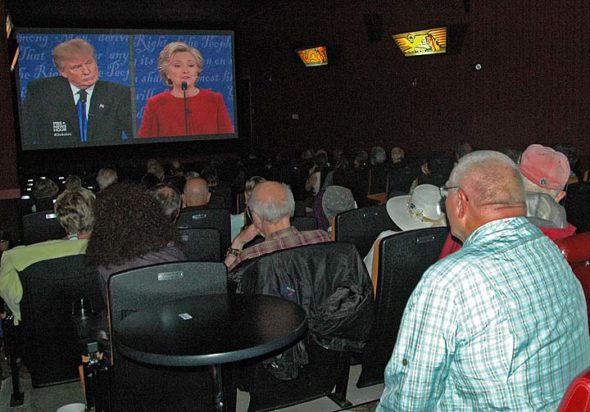 The house was packed Monday night at the Little Art Theatre for a Debate Watch Party presented in partnership with ThinkTV, Channel 16, the local PBS affiliate. Viewers at the free event watched a live stream of the historic presidential debate as it unfolded at Hofstra University in Long Island, N.Y., variously responding to the candidates’ pronouncements with jeers or applause. (Photo by Carol Simmons)

The first of three national presidential debates Monday night was observed locally at the Little Art Theatre with activities througout the day culminating in a community watch party of the historic event.

The live stream of the candidates’ debate at Long Island’s Hoftra University and the Little Art’s programming leading up to it were presented  through a partnership with ThinkTV, Channel 16, the Dayton-based PBS affiliate.

A big component of the day involved Mills Lawn students, who visited the theater with their classes and teachers to learn more about the voting process.

Greg Schell, of ThinkTV’s education team, was on hand to engage the youngsters and introduce the programming.

The youngest students, 90 kindergartners and first-graders, watched a video titled “The Neighborhood Votes,” part of the “Daniel Tiger’s Neighborhood” series.  Later, second- through sixth-graders were introduced to a newly produced e-book titled “Your Vote Counts,” whose author and illustrator had come to town to interact with the kids and answer questions.

The students’ excitement at being in the movie theater on a school day was palpable. ThinkTV’s Schell asked the kindergarteners and first-graders if they knew what voting is, and a sea of hands flew into the air.

“Two people -— you have to vote for one, and one will be president.”

“The one the most people choose wins.”

The video depicted a variety of situations in which the youngsters might have a voice in making a group decision — choosing a snack, whether to eat inside or out, picking the kind of animal to have as a class pet. The video instructed that casting a vote involves stoppping to think about the choices and learning more about each one. It also showed strategies for dealing with disappointment when your choice loses.

The importance of making informed choices was one of the main themes of the program presented to the older students in “Your Vote Counts!”

The title is part of an educational book series written by MaryTherese Grabowski and illustrated by Michelle Graham-Fricks. The series, entitled “Spirit of America,” follows a girl named America Johnson through adventures that illuminate aspects of U.S. government and history.

In “Your Vote Counts!” America is running for student council. In the process, she learns how the country votes for president — including the electoral college system — along with responses for fellow students who say their vote doesn’t matter.

The video version of the book came about through a collaboration with PBS, and Mills Lawn students were the first group of young people to view it before PBS takes it national, according to Schell.

Grabowski and Graham-Fricks said they are thrilled to see the work come alive through the animation effects and were excited to get the local students’ reactions.

A former CBS TV reporter who lives in Washington, D.C., Grabowski said the idea for the book series and the character of America Johnson was born through a conversation she had with her then 12-year-old niece after Barack Obama had clinched the Democratic nomination in 2008. She wondered aloud who he might pick for his cabinet, and her niece replied: “Why do I care who makes his furniture.”

Grabowski started thinking about when and how civics is taught. “Our kids are not learning civics until the 10th grade, and that’s scary because they’re voting in two years.”

The “Spirit of America” series introduces civics to a younger audience. Mills Lawn students, who are also getting in-class lessons with their teachers, were receptive to the message. One even remembered how many electoral votes are needed to become president — 270.

All told, more than 150 students took part in the programming Monday, arriving in shifts with their classes throughout the morning and early afternoon.

Adults got their turn later in the day, as the Little Art screened episodes from the American Experience PBS series “The Presidents” as a lead up to the evening Debate Watch Party.

Invitations for the free watch party had gone out to Little Art members, and so many reservations were made before Monday, a waiting list had been started.

Guests were waiting when the theater doors opened at 7:30 p.m. Balloons and streamers in the foyer underscored the festive atmosphere.

Among the crowd were representatives of the Plate of the Union initative, who were passing out information about food and farm-related issues, and a representative of the Greene County Democratic Party, who was handing out ballot listings of Democratic candidates.

The reasons people came and what they hoped to hear were varied.

Joshua Lustre, a college-age young adult who came with a group of friends, said he wanted the candidates to talk about “how the money will be used.” Noting that past presidents have focused on defense or infrastructure, he said, “I’m wondering what plan they have for spending money.”

Delores Adkins, from the county Democrats, said “I’d like to see Hillary wipe the floor with him.”

ThinkTV’s Schell stressed the historic nature of the evening, telling the crowd that “an estimated 80 million viewers are stopping what they’re doing to tune in.”

As someone engaged in educational initiatives, Schell asked the crowd if anyone else was interested in hearing about education. Sean Creighton, a member of the school board who works in higher education, raised his hand and went on record: “I’d like to hear about education.”

While the audience members at Hofstra University were instructed to remain silent through the debate — not to clap, call out, or make other audible responses to the proceedings, the Little Art crowd were encouraged to do the opposite.

“If you have an opinion, let it out,” Schell said.

And they did. Given the responses, if the gathered audience were the sole determiner of the election, Hillary Clinton would win the presidency in a landslide.

If Donald Trump supporters were in the audience, they kept their affinity to themselves.

Only once did anything Trump said get a positive response. A lone clap in the back of the theater echoed out near the beginning of the debate after the Republican candidate said the U.S. needed to stop companies from sending jobs to other countries.

Otherwise, Trump’s comments were met with derisive laughter and scorn. His assertion that gangs are made up of “illegal immigrants” and his declaration of support for so-called “stop-and-frisk” policing methods were both met with a loud “No, no, no.”

On the other hand, Clinton’s statements earned frequent applause and the occasional shouts of “amen” and “you go, sister!”

In the follow-up PBS commentary afterward, the statement from New York Times columnist David Brooks that he thought Trump dominated for the first 30 minutes received a resounding “boo” from the Yellow Springs folks still on hand.

The day’s events, from the morning’s youngest visitors to the evening’s experienced electorate, revealed a community deeply engaged in the electoral process and concerned about the future.

Our youth may not be able to vote in the presidential election, but they have a stake in its outcome, and they clearly care. They’re watching the adults — what we say, and what we do.

Considering the election’s potential results, one young Mills Lawn student offered what might have been the day’s best piece of advice: “If you can’t get what you pick -— don’t throw a fit.”