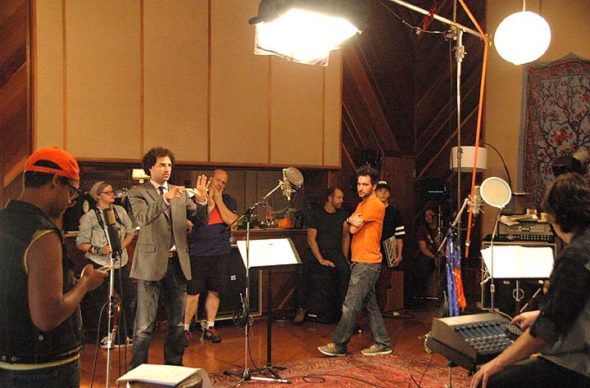 Writer, director and Yellow Springs resident Joel Moss Levinson (with hands raised) directed on set at a recording studio in Kettering last week. Levinson and his brother, Stephen, wrote and directed “Boy Band,” a comedy musical about a boy band trying to make their comeback album 17 years later. The production is being shot on location in Dayton and the Miami Valley, and features nationally known stand-up comics as members of the boy band. (Photo by Dylan Taylor-Lehman)

Last week, at the end of a quiet residential street in Kettering, a recording studio was taken over by a film crew. Outside were box trucks full of equipment, miles of cables running to and from the buildings, and an impressive spread of catered food.

One could tell this was the real deal: someone was making a movie here. Scenes were being shot inside the studio, a ridiculous comedy musical called “Boy Band: The (Heart)Throb Story,” penned by Yellow Springs resident Joel Moss Levinson and his brother, Stephen Levinson.

Producers, actors and the camera crew were crowded inside the studio. The hero of the film, a washed-up ex-boy band singer named Johnny Throbstein (aka Johnny Heartthrob), played by stand-up comic Steve Agee, was practicing facial expressions on a couch in the control room. Joel Levinson was on the other side of the wall, trying to determine the best series of angles for the camera to capture Throbstein’s emotions. The camera started rolling, and Joel narrated what Throbstein should be expressing. A monitor showed Agee’s face lighting up with a realization according to Joel’s directions. After a few more minutes of shooting and a scene in which the Throbstein sobbed uncontrollably, the Levinsons decided they got what they needed and broke for lunch.

There was a scramble to take notes on the scene and the equipments’ settings. “Room tone! Camera 21 for room tone!” someone yelled, a technical phrase among other bursts of filmmaking language. The production offered a lot to coordinate and a lot to understand, but the Levinsons were in good spirits. The project is not only a labor of love and the brothers’ next logical step as comedy writers and filmmakers, but it features a crew made up of a number of their friends, they said.

“Boy Band” tells the story of the members of (Heart)Throb, “who have spent every day of the past 17 years working on the follow-up to their multi-platinum debut album, leaving them older, fatter, balder, and less ‘boyish’ than any boy band has a right to be,” according to press materials for the film. The band has one day left in the studio to finish their album, and the movie chronicles this final push.

Joel has been making comedy shorts by himself for years, and Stephen is a writer for “The Tonight Show.” The idea of penning and directing a feature-length comedy film together has long been a dream of theirs.

After toying with other ideas, the brothers came up with “Boy Band” about a year ago, and immediately got to work writing a script. Since the movie is a musical, Joel also wrote the music, including the band’s in-movie 1998 smash pop hit “When I page 911…(it means I need you now!).”

The idea was to make the kind of comedy that they love to watch — big, goofy comedies like those by the Farrelly Brothers or starring Will Ferrell — but on an indie budget. At first, people may be hesitant when they hear the term “indie comedy,” Joel said, as it implies a schmaltzy romantic comedy involving hip young people, but they are confident they can make an indie comedy with big-budget humor.

The subject matter — boy bands — is inherently funny, Joel said, but so is watching someone try to be the same person and do the same things they did 15 years ago. Combining the two makes for tragicomic delusions of grandeur but also a set of goofy heroes you want to root for.

But while the trials and travails of an aging boy band singer are funny, the difficulty of feeling stuck is a universal woe, and one that connects with the brothers’ own experiences. Joel said he fell into the same trap that Johnny Heartthrob did. He was making and writing comedy shorts that achieved some level of success, including being on the cover of the New York Times and a feature on “The Tonight Show,” but it became a job and was no longer as rewarding as it once was. Stephen said that his job writing monologues for “The Tonight Show” is a dream job, but the fact that the jokes have to appeal to the whole country makes it difficult to put an individual touch on the humor.

“I was doing enough writing and joking for other people,” Joel said. “This [project] is for me.”

To tell this story, the Levinsons wanted the film to feature actors somewhere between obscure and popular (or between “50,000 to 150,000 Twitter followers”) to make up the screwball ensemble. Like the filmmakers, the actors are comics who have had some success but are still up-and-coming. Steve Agee, who plays Johnny Throbstein, plays a recurring character on the TV series “New Girl,” while Jordan Carlos, playing another member of the boy band in the movie, has been on the “Nightly Show with Larry Wilmore” and the “Colbert Report.”

“It’s most of the cast’s first role in a feature of this size,” Joel said. “But audiences will be excited to see them. They’re known and it will be cool to see what they can do.”

The Levinson Brothers (as they are known as a team) originally thought they might be able to make the movie for next to nothing, using local improv actors and equipment they already owned. But the project gained investors as it gained steam, and a Kickstarter campaign crowd-funded a significant portion of the budget. By industry standards, the film is being made on a “micro-budget” of less than $250,000, Joel said, but thanks to the largesse of their friends and supporters, they are able to do a lot with it. He declined to specify the cost of the film.

“The casts’ trailers were donated, the catered food was donated, and other favors were called in,” said area freelance producer Kathleen Hartshorn, who is producing the film. “It would’ve cost double or triple what it did without the help of friends and interested parties.”

Much of the 25-member crew making “Boy Band” is from Dayton or the Miami Valley area. “An eclectic group of local film people,” Joel said, including Wright State film students and Hartshorn, all jumped on board. Simon Fisher, who lives just outside of Yellow Springs, originally signed on as a set dresser but is also working as a boom operator and props man. The crew members all work well together because they believe in the project.

Joel said that a competent, experienced crew allows him to focus on making jokes.

“We had to find people passionate about the movie,” Joel said. “That’s why we came to Dayton and the Miami Valley. In Los Angeles, I would’ve been just a schmuck trying to make a movie.”

That the film is being shot on location in Dayton is crucial to making the most of the budget. Filming will also take place in Yellow Springs this week. In fact, the prospect of filming a movie in the Levinsons’ hometown of Dayton was part of the reason Joel decided to move back to the area from Los Angeles with his wife, Randi, and their two children two years ago.

Shooting is scheduled to wrap this week, and then the editing process begins. They also have to finish the music, which Yellow Springs musician and hip-hop artist Issa Ali is helping to produce.

After an hour break for lunch, the actors began rehearsing for a scene in which they are trying to convince one of the members to rap over a new song. The argument is appropriately absurd, which made everyone on set laugh.

The Levinson Brothers are aiming to premiere “Boy Band” in the summer of 2017, ideally at a prominent film festival where there are lots of industry-types and distributors. The movie’s engaging cast and ridiculous story bodes well for comedy fans, Hartshorn the producer said.

“I am certain this film will get picked up,” she said. “People will love to see this talent together.”