‘Nagasaki’ author to speak at AUM 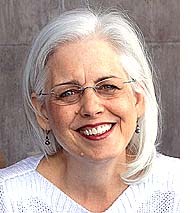 Susan Southard, author of “Nagasaki: Life After Nuclear War,” will speak in the multipurpose room of Antioch University Midwest on Saturday, Nov. 19, from noon to 1:30 p.m. (Submitted photo by Susan Santi)

Susan Southard, who will be awarded the Dayton Literary Peace Prize this week for her nonfiction book on the survivors of the Nagasaki atomic bomb, will speak in Yellow Springs this Saturday.

Southard, the author of “Nagasaki: Life After Nuclear War,” will speak in the multipurpose room of Antioch University Midwest on Saturday, Nov. 19, from noon to 1:30 p.m. She will be awarded the prize on Sunday at a ceremony in Dayton hosted by journalist Nick Clooney.

“I accept this beautiful award in memory of the hundreds of thousands who died 71 years ago and in the years that followed, and the countless more who faced the acute and long-term terrors of post-nuclear survival,” Southard stated in a press release. “Their day-to-day suffering is still obscured by iconic images of atomic clouds rising over Nagasaki and Hiroshima or diminished by passionate justifications for using the bombs. Peace is an arduous endeavor and impossible to achieve without a commitment to understanding the grievous harm our actions inflict on others.”

In a phone interview on Tuesday, Southard said the seed for her book was planted 30 years ago, when in 1986 she attended a talk by a Nagasaki survivor in Washington, D.C., where she lived at the time.

“It was absolutely riveting, to hear someone who lived through nuclear war speak of his experiences,” she said.

Southard, who speaks Japanese, spent more time with the man when she worked as his translator for a few days during his visit. Following that, she visited Nagasaki and met more survivors.

Still, she said, she had no intention of writing a book.

“But the stories stayed with me,” she said.

So Southard began the book in 2003, and spent 12 years researching and writing it. However, after about a year she realized she didn’t have the writing skill she needed to complete her project, so she applied to join the Masters of Fine Arts in creative writing program through Antioch University Los Angeles.

“My time at Antioch played a big role in my ability to finish the book and complete my vision,” Southard said on Tuesday.

Most important, she said, was the constant practice in writing and the feedback she received from her fellow students and her teachers.

The book was selected for the prize because “her work is deeply ethical, ever mindful of context, allowing the voice of the ‘other’ to speak directly to us often in dialogue that includes phrases of transliterated Japanese,” according to the 2016 finalist judge Ruben Martinez.

Southard has been a nonfiction fellow at the Norman Mailer Center in Provincetown, Mass. “Nagasaki: Life After Nuclear War” has also won the J. Anthony Lukas Book Prize from the Columbia School of Journalism and the Neiman Foundation at Harvard University.

Inspired by the 1995 Dayton Peace Accords, the Dayton Literary Peace Prize is the only international literary peace prize awarded in the United States.