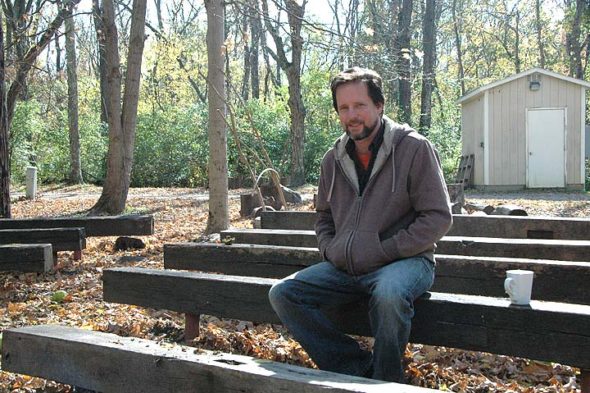 The Glen Helen Outdoor Education Center’s new director, Michael Blackwell, sat in his (outdoor) office, where he instructs school-age students and the OEC’s interns in naturalist skills and about the history and ecology of the Glen. Blackwell arrived in early October, and is “inheriting the OEC’s 60-year tradition.” (Photo by Dylan Taylor-Lehman)

The office of Michael Blackwell, the new director of Glen Helen’s Outdoor Education Center (OEC), is based in a small trailer at the end of a series of roads that winds deep into the Glen. No more than 50 feet away is a fire pit, and the whole camp is ensconced in towering trees. On sunny, crisp fall days, like the one on which this interview was conducted, it is easy to feel removed from the world outside the trees. That is partly why Blackwell came to work at the Glen.

After shaking hands, he suggested the interview take place over on the circle of logs.

“Why work as an outdoor educator if you are just going to sit inside all day?” he asked.

The aim of the OEC’s Outdoor School is to help students acquaint themselves with nature. Students in grades 4–7 spend three or four days learning what Blackwell described as a “synthesis of ecological skills”: listening to birds and reading the weather, for example, while gaining an understanding of the history and ecology of the Glen. Students stay in bunks at the Glen, in groups of up to 100 students at a time, throughout the school year. Approximately 40 schools participate in programs at the OEC, which is one of the oldest outdoor education centers in the middle part of the country. This year marks the OEC’s 60th anniversary.

According to Nick Boutis, director of Glen Helen, the OEC opportunity affords more than the average field trip, in which students show up and “run around screaming for an hour and a half before getting back on the bus.” The OEC program truly is an immersion, he said; students live and breathe the experience.

“Even when it’s disgustingly cold out, those rainy March days before flowers start growing again, students are having the best experience of the school year,” Boutis said.

The OEC’s classes are also a sort of school for the college-age interns, who in turn are learning to become naturalists and teachers. Over the course of 10 months, the interns learn pedagogical and professional skills, all centered around environmental education. It is Blackwell who teaches the teachers, acting as a mentor to the budding naturalists.

Based on Blackwell’s previous experience as a naturalist and educator, the director position is an “uncannily perfect” opportunity. Blackwell came to Yellow Springs in early October from southern West Virginia, near Roanoke, where he was working for more than a decade teaching and in an administrative capacity at Virginia Tech. He has a master’s degree in education psychology, and worked for a decade in nonprofit community development. Importantly, he has been honing his naturalist skills for 20 years. The mix of teaching and managing the administrative side of the program comes easily, he said, as does helping to foster the knowledge in others that is so important to him. While he had to leave the home and farm he spent decades building in West Virginia to take the job in Yellow Springs, the fact that people in the community have been so welcoming and have even helped him find a place to live underscores his excitement at being able to work at Glen Helen.

Outside on the logs, Blackwell talks with the manner of someone relishing the feel of the sun on his face, and drawing strength from taking in measured breaths of forest air.

“This is the job I’ve been looking for 20 years,” he said. “And there is a good energy here. The community is progressive but traditional.”

Boutis said the Glen’s staff is “super excited” to have him there. Blackwell’s demeanor is suited to the joys and challenges of environmental education, he said. Because the students and interns have such an immersive experience, Blackwell has to navigate a dynamic that can seem more like a family than a workplace.

But this is the environment in which Blackwell loves to work, and the knowledge he loves to pass on. In one exercise, Blackwell asks students to close their eyes and point north. As it almost always turns out, most students cannot orient themselves. During the course of the interview, Blackwell pointed out a Cooper’s hawk that had alighted on a branch 100 feet away, hidden in the trees. He noted the changing patterns of the birds chirping around it, which went from conversational cheeping to one of concern, alerting other birds that a predator was nearby. Something as seemingly basic as an understanding of the cardinal directions or observation of animal behavior is absent because people in general don’t need to rely on this knowledge to survive. But these skills are valuable, not only in a survival sense but because they help people feel connected to the world around them.

Developing a relationship to the land has positive effects inside the classroom as much as it does outside, Blackwell said. He pointed out that “humility” and “humus” stem from the same root word: people feel humbled with regards to beauty of the landscape, which fosters the sense that one is part of it instead of living to dominate it.

The ability to see things so expertly camouflaged and to interpret sounds that otherwise would be generically classified as birdsong are not necessarily easy ones for the apprentice teachers to communicate, Blackwell acknowledged. The program welcomes a different group of students each week, and so the teachers have only a short amount of time to build up a rapport with the students, while teaching them new skills and topics they may not have ever had experience with.

In many cases, the students take to the lessons very quickly, likely because it is such a refreshing change of pace, Blackwell said. Students often arrive in tears, worried about what the experience away from home will be like, but are likewise in tears when it comes time to leave because they are so transformed by the program, he said.

Students of different ages respond to different kinds of lessons. Pre-adolescent students have an insouciance and enthusiasm that’s hard to match, he said. The camp mixes art and play into its programs, and younger students have no problem jumping right into songs or group activities. Middle school students are characteristically hesitant to participate in group activities, but are intellectually mature enough to acquire the more nuanced skills the program tries to impart.

“Good teachers tailor [unfamiliar] lessons to people’s prior knowledge,” Blackwell said. “My role as a facilitator is to get people together as a team and light the match of creativity.”

The Outdoor Education Center “expands on the frame of schooling,” he said, taking kids from the classroom to the woods. In his estimation, he said, education is going through a crisis, as mainstream schooling is an environment not particularly conducive to learning.

“[Traditional] schooling is one of the most ingrained social patterns,” Blackwell said, and this prescribed method of learning doesn’t always speak to the strengths of the students. In fact, some of the students who are the “least successful” at school have the most success at the OEC, he said. Overall, he said has received a lot of feedback from teachers who say that their students are able to relate things they’ve learned later in the year to the experiences they had at the Glen.

Blackwell said he has had “dozens” of conversations since he arrived with people who have had transformative experiences at the OEC and at the Glen. The lessons visitors, students and apprentice teachers have learned provide insight they are able to carry throughout their lives.

“I’m inheriting a 60-year tradition,” Blackwell said. “There is a lot of wisdom and intelligence in this organization, and I hope to provide a continuation of the impressive legacy we already have.”