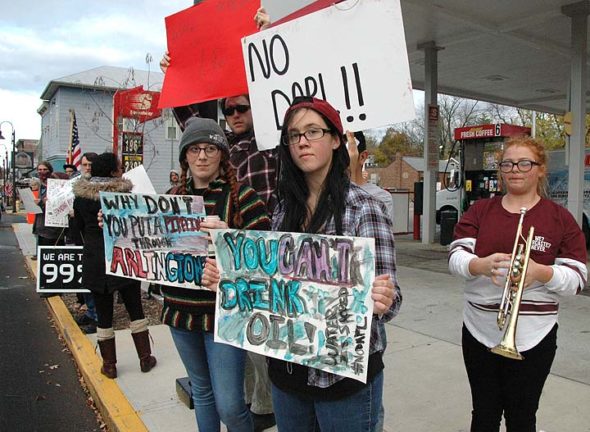 About 35 people gathered at the Yellow Springs Speedway last Friday to protest the construction of the Dakota Access Pipeline in North Dakota, which cuts through the Standing Rock Indian Reservation. The local protest is one of several efforts in Yellow Springs to call attention to the issue and support protestors in Standing Rock. Speedway’s parent company, Marathon, is a major investor in the pipeline project, and local protestors plan to continue pressuring the company with demonstrations each Friday in Yellow Springs and each Wednesday at Speedway’s Enon headquarters. (Photo by Matt Minde)

Standing up for Standing Rock

It can be assumed that an issue is of importance when at least three independent groups of villagers begin organizing events to bring attention to it. Recently, a number of Yellow Springs residents have been advocating on behalf of those demonstrating against the construction of an oil pipeline through the Standing Rock Indian Reservation in North and South Dakota. As protestors see it, the pipeline is a continuation of a legacy of exploitation of native lands and people, and one that has the potential to be an environmental disaster, said villager Isaac DeLamatre.

“I see a vanguard forming [in protest of these injustices] and it’s inspiring,” he said.

A vanguard has also been forming in Yellow Springs as well. Residents have hosted garage sales and collecting donations to send to the Standing Rock protestors; students at the Montessori school hosted a benefit bake sale; and villagers Tashi Pahkrin and Shawn Tulecke have been helping to organize local demonstrations designed to draw attention to the Standing Rock movement. Pahkrin felt it critically important to do something that “furthers the conversation” about what she considers the key issues exemplified by the pipeline controversy: indigenous rights, environmental racism and the destruction of the natural world.

“It’s about suppression and oppression,” she said, “And about in living in harmony with the earth to build a better future.”

The protests in Standing Rock concern the Dakota Access Pipeline, a pipeline that will transport oil 1,134 miles from western North Dakota to southern Illinois, cutting through the Standing Rock Indian Reservation in the process. The project was given the go-ahead in the spring by the US Army Corps of Engineers. But some activists allege that the project is proceeding without sufficient environmental impact studies, or consideration for native autonomy. According to demonstrators at the site and around the country, a leak in the pipeline would contaminate the reservation’s water supply.

Despite court injunctions to pause construction, progress has continued, including the bulldozing of an area on the reservation over Labor Day weekend. Protests against the pipeline have been in place since the pipeline’s inception but picked up speed in early summer, drawing participants from all over the country. The protestors, calling themselves “water protectors,” are aiming to halt construction, or reroute it away from native land. Camps were set up in the direct path of the pipeline, and some demonstrators chained themselves to equipment in order to impede progress. In September, members of private security companies were filmed using attack dogs and tear gas against protestors. In October, demonstrators were confronted by police in riot gear. Demonstrations are ongoing, as is construction.

For Pahkrin and Tulecke, the decision to do something to help those in Standing Rock was one of conscience. Tulecke was especially moved by the words of Winona LaDuke, an environmental and indigenous rights activist who spoke at Antioch College in the spring. LaDuke implored people to help support the water protectors, and Tulecke said he took her pleas very seriously.

One of the major investors in the pipeline is Marathon, whose subsidiary, Speedway, has its corporate headquarters in Enon. With a lot of people in Yellow Springs “sympathetic to the protests” and the Speedway headquarters only 10 minutes away, Tulecke felt it was a perfect opportunity to help raise awareness of the issue.

Tulecke and Pahkrin were also part of a group that paid a visit to the residence of Ohio Attorney General Mike DeWine earlier this month, asking him to withdraw the 37 state troopers Ohio sent to Standing Rock. The momentum of coming together for the meeting prompted the attendees to organize the follow-up demonstration at Speedway later that week, given the company’s relationship to the pipeline.

“As far as places we can actually have an effect and make a difference, it’s at the companies that have a stake in the pipeline,” Pahkrin said. “And it’s important to show support from afar.”

The group handed out leaflets to spread word of the demonstration. Around 30 people met at the entrance to the Enon Speedway headquarters on Nov. 9, and were in turn met by company security and a sheriff. But they were able to demonstrate as planned, and stayed at the site for at least two hours. Pahkrin considered the event productive, as she was able to explain the Standing Rock situation to passersby who weren’t familiar with the pipeline. Following the event, they coordinated another demonstration in front of the Speedway gas sation in Yellow Springs.

Ryan Stinson and Anna Burke were planning their own demonstrations at the same time as Pahkrin and Tulecke, and at the time, neither group knew about the other. Concerned by what they saw as a lack of attention paid to the struggle, Stinson and Burke wanted to bring more awareness to the issue.

“I was shocked more people don’t know about it,” Burke said.

Burke and Stinson linked up with the groups demonstrating at the Speedway campus. The Enon demonstration got on the local news, Burke noted, a boon to getting the message heard.

“Whether you agree or not, you see us out there, and that puts the issue in the forefront of your mind,” Stinson said. “No matter how large or small, actions speak louder than words.”

According to Stinson, the demonstrations are a way to tell people that big government and big business don’t have to run the country. They are also a duty that the couple feels compelled to undertake as an example to future generations.

“When my daughter asks me what we did [to help Standing Rock], we can say we tried,” Burke said.

“And we can say she did something too,” Stinson said, pointing out that their two-year-old daughter has accompanied them to both demonstrations.

DeLamatre, food service coordinator at Antioch College, is also making the NoDAPL protests a family affair. His young sons will help him ferry supplies out to Standing Rock demonstrators this week. DeLamatre, with his sons Asher, 7, and Amitai, 6, will leave on Nov. 18 on a 40-hour roundtrip journey, and will be accompanied by Antioch media arts professor Kelly Gallagher. While the group will spend half a day with the protestors, the mission’s prime directive is to deliver much-needed goods, he said.

“It’s important to support indigenous struggle wherever it’s happening, in any way I can,” DeLamatre said. “It is a political and moral obligation.”

He has been planning a supply trip out to the demonstrators for at least a month, after speaking with a friend protesting on site. His friend outlined the needs of the protestors, and so DeLamatre created an Amazon.com wish list, approved by those at Standing Rock, of supplies that people could purchase and donate. Requested items included sleeping bags and winter clothes, he said, as well as gear like radios and respirators, which, according to protestors, are in short supply because gear is confiscated every time someone is arrested. Thanks to the wish list and the goods collected by Rev. Aaron Saari of the First Presbyterian Church, he has amassed a vanload of supplies to deliver. Added to the cache are supplies and money collected from a bake sale benefit held at the Montessori school.

The trip will also be a way for DeLamatre to discuss with his sons the values and issues that he and his partner, Hannah, find important. He imagines it will be easy to talk to them about the allocation of natural resources, but reckons a conversation about colonialism and the role the police have played in removing demonstrators will have to be a little more nuanced. Citizens are socialized to think of police as protectors, he said, but how does one explain the police’s use of violence and use of dogs, and the history of mistreatment of indigenous people?

DeLamatre, Gallagher and the kids will be driving out to the site in a passenger van, but accompanying them will be a carful of Antioch students, including Tatiana Benally, a fourth-year media arts major. Benally said it is important to her as a Navajo woman to witness the coming together of so many different indigenous groups. (As of September, members of more than 100 different tribes have been at Standing Rock, according to NPR.)

“The demonstrators come from across tribal lines, and this is great for future tribal relations,” Benally said. “We haven’t realized the unity we’re capable of when it comes to confronting issues like this.”

After delivering the supplies, the group will spend half a day at the camps. Considering the arrests, constant surveillance and the nature of the struggle, DeLamatre said, Standing Rock is a “very charged and very taxing” environment. The trip isn’t intended to stoke one’s activist ego, or to go on a sort of activist adventure, according to DeLamatre; he is there to serve the protestors. After the stopover at Standing Rock, the caravan will drive straight back to Yellow Springs, hopefully arriving sometime on Sunday evening.

“It’s not about us, it’s about Standing Rock and doing whatever you can to help,” he said.

Bigger than the moment

While he hoped to foster more communication among people in Yellow Springs advocating on behalf of Standing Rock, DeLamatre said he felt it was good to see that the groups are operating independently of one another. That some people are collecting supplies and some are organizing demonstrations prevents redundancy and encourages productivity.

The recent election of Donald Trump has filled anti-pipeline activists with consternation, as Trump said he vows to keep the project going. But Stinson hopes that the issues inherent in the demonstration will resonate regardless of political inclination.

“It’s bigger than just this single moment,” he said. “It’s political, environmental, spiritual, historical — it’s not about party lines but respecting each other as people.”

For this reason, Tulecke said he intends to keep advocating locally for the Standing Rock activists, putting pressure on the companies and government agencies involved in the pipeline, and to raise awareness about indigenous struggles, both related to the pipeline and beyond. Local interest has grown organically, he said, and isn’t the result of just one individual or group.

“Yellow Springs is a strong community,” he said. “Let’s work together on this.”

Local activists plan to demonstrate at the Speedway headquarters in Enon every Wednesday, and the Speedway gas station in Yellow Springs every Friday. More information can be found on Facebook by visiting the YS NoDAPL Protest group.