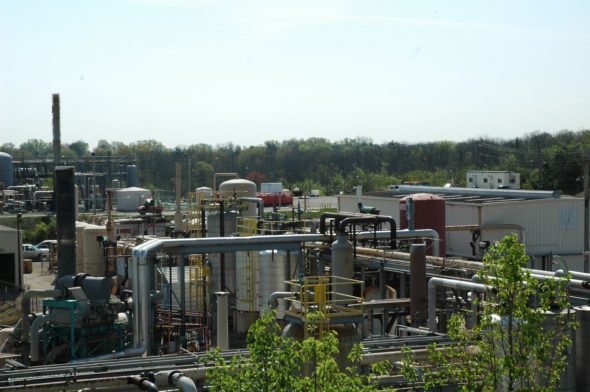 Yarn Registry BLOG: A Landfill is an Ecosystem Unto Itself, part II

Into the microbial depths (of garbage)

Part 2 of a series investigating the many layers of life in the average landfill. This week’s entry discusses the smallest layer of life in a landfill – inimitable and fascinating microorganisms. Next week: insects!

The odor of a landfill is a distinct indicator of the presence of the bacteria and fungi within it, as my aunt and uncle came to understand very well. A few years ago, they bought a house less than two miles from a major landfill. Either they were not aware of its location or were not told, but when the weather got warm, the gnarly odor of the dump came rolling down the surrounding hills and permeated their neighborhood. While the smell smelled partly like garbage, a very distinct component of the stench was sulfur, a compound present in the gas produced as garbage decomposes. The smallest layer of life in a landfill — a “robust set” of microscopic bacteria, fungus, yeast, and protozoa — consumes and digests organic materials in garbage, breaking it down like an enormous compost pile and producing huge amounts of methane gas as a byproduct of their activities.

An estimated 10,000 species of bacteria and fungi live in a gram of soil. Approximately 25,000 aerobic bacteria laid end to end would measure an inch. Bacteria, like pretty much any organism that wants to operate at optimum efficiency and comfort, are pretty picky about the conditions in which they live. Bacteria and fungi cannot grow if the temperature is too low, and they need waste with sufficient nitrogen content to make the proteins that allow them to grow. Fortunately, landfills are often porous enough to allow for the dispersion of rainwater and leachate. Leachate, shown to have a “unique geochemical composition” of highly toxic compounds[1], also contains high levels of phosphorus and nitrogen, which are crucial to bacterial growth.

A host of other microscopic organisms like nematodes, protozoa, and archea feed on bacteria and fungi, and process the organic components of garbage into a product more nutritious and easily digestible by other creatures. Nematodes contribute greatly to the decomposition of organic material because of high food consumption and nutrient recycling rates. The microscopic nematodes — numbering at 106 individuals per square meter — are also known as roundworms and make up an estimated 80 percent of all of the animals on Earth, and live in almost every possible climate and location. Scientists estimate that there may be up to one million species of nematodes, while a full half of the known species are parasitic. Protozoa are single-celled organisms that are capable of propelling themselves around and feeding, while archea are microscopic organisms that exists as single-celled beings or clusters. The landfill is not an unusual environment for archea, as they are “extremophiles,” the creatures one often hears about living in deep sea vents, gorging on volcanic sulfur, or in areas with extreme salinity or extreme heat.

But it is the bacteria and fungi that are the most crucial decomposers. Imagine a pile of garbage cross-sectioned from top to bottom. The cross-section would show layers of garbage in different stages of decomposition, with different kinds of bacteria responsible for each phase. The first stage of decomposition involves aerobic bacteria, or bacteria that need oxygen to survive. They consume oxygen as they consume organic waste, effectively melting it on a cellular level. When the oxygen is depleted, anaerobic bacteria pick up the decomposition process, as they do not need oxygen to function. They get to work digesting the compounds created by the first bacterial phalanx. These are digested into acids and alcohols, making the landfill highly acidic. Nutrients dissolve as the acids mix with any moisture present, and are dispersed throughout the landfill.

The landfill becomes a more neutral environment as other anaerobic bacteria eat the acids they’ve created, allowing methane-producing bacteria to prosper. These bacteria produce methane as a waste product of the items they are digesting. Once methanogenic bacteria establish themselves, they steadily produce gas for at least 20 years, and sometimes even as long as 50. Generally, the composition of the gas produced by these organisms is 45-60 percent methane and 40–60 percent carbon dioxide. Other gasses, such as ammonia and oxygen, are present in small amounts. Weird little capped pipes come out of the ground near active garbage sites and in the otherwise nondescript grass hills and fields. These are vents that help outgas the methane. Most of the gas, however, is harvested and processed by the on-site refinery, or burned off via flares. (Towers with what appear to be everlasting flames are a common site at landfills.) The gas is sold to energy companies, and garbage gas is even used to power some of the Rumpke’s trucks. Methane is only about half as efficient as natural gas, but according to Rumpke, who has over 200 gas wells on the Colerain property, the landfill produces enough methane to power 25,000 area homes.

Aside from the pungent aroma of decomposing garbage, landfills are stinky because of sulfides present in the gas, which are produced by anaerobic bacteria. Comprising only around one percent of its volume, sulfides are nonetheless responsible for the garbage gas’s rotten-egg odor, which is why driving by a landfill often smells like weird gas instead of trash. All of the other gasses present are odorless and tasteless; the tiny percentage of sulfides is responsible for the smell that induced my aunt and uncle to move, and for the slap they likely delivered to their real estate agent for not telling them their house was near the county tip. Though in reality, they kind of lucked out it wasn’t worse — anaerobic bacteria also produce cadaverine and putrescine, which smell exactly as their names suggest.

The establishment of bacteria in the first place depends on the contents of the landfill. Organic waste is crucial to the process, introducing bacteria into the dump as well as nutrients like magnesium, calcium, and potassium, which help bacteria flourish[3]. Organic waste is abundant in the average landfill. According to industry figures, approximately half of the landfill’s contents are some kind of organic waste — restaurant food scraps, wood and paper, textiles, etc. According to one author, “fungi and bacteria are not restricted to decomposing leaves and other plant materials. They will decompose any dead organic matter, whether it is a cardboard box, paint, glue, pair of jeans, a leather jacket or jet fuel…made from petroleum, which is made of decomposed microscopic creatures from the oceans of the Mesozoic Era.” Bacteria and fungi are also introduced into the landfill via the soil dumped on the garbage at the end of every day.

Revoltingly, industry figures show that soiled diapers make up four percent of any landfill’s intake, providing their own pungent breeding ground for bacteria. (Remember, Rumpke takes in 6000 tons of garbage per day — four percent of 6000 tons is 240 tons of dirty diapers — every day!) Moreover, landfills are generally able to accept carcasses and other animal waste from slaughter plants. Thus, while not common, it wouldn’t be impossible for animal remains to be mixed in with municipal solid waste, which would certainly introduce bacteria of its own. The Franklin County Sanitary Landfill, serving Columbus, Ohio and its surroundings, “will accept animal carcasses for disposal,” provided the attendant is notified and the carcasses are “disease free and in heavy bags, if possible.”[3] These remains would be dumped in the current working face of the landfill.[4] Medical waste, with its attendant bacteria, is often present as well.

The microscopic organisms create heat as they do their dirty work. Bacteria are the organisms most responsible for the entire decomposition process. They energize themselves with carbon and grow by consuming nitrogen. Their activities are powered by oxidizing organic material, and this oxidization is what causes the heat. Signs of biological activity are temperatures between 90 and 150 degrees — high temperatures facilitate the breakdown of proteins and complex carbohydrates like cellulose, the most abundant compound in modern refuse. Bacteria can withstand the surprisingly high temperatures reached by composting garbage. In fact, thermus bacteria has been found in decomposing waste: thermus has also been found in hot springs in Yellowstone National Park and deep sea thermal vents.

Coupled with the flammable methane gas coursing through the landfill, Broadwater said that one area of the Rumpke landfill was decomposing at such high temperatures that a massive fire broke out and burned for at least a week. This is roughly equivalent to your compost pile churning with such vigor that it spontaneously bursts into flames. Rumpke was unable to figure out why this area was decomposing at an elevated temperature, and the section continues to be mysteriously hot to this day. Coupled with the presence of the methane, the combustible garbage is a strange hazard to all denizens of the dump.

[1] Such as toluene, phenols, benzene, ammonia, dioxins, PCBs, and pesticides.

[3] These remains would be dumped in the current working face of the landfill, as opposed to the elephant that’s buried on the Rumpke site. An elephant that died when a circus passed through town is buried on site, but not near the garbage. Also buried at the Rumpke landfill are the world’s largest chocolate bar and “Touchdown Jesus,” an enormous fiberglass Jesus that faced the highway from the lawn of a church. The figure’s arms were raised in the air, affecting a gesture very similar to that which referees use to declare a touchdown. The statue was struck by lightning, caught on fire, and melted. Rumpke accepted the remains. The church has since rebuilt the statue, this time out of cement.

[4] I can attest to this: once, when I worked for a construction crew, I accompanied my boss to dump our trailer at the dump. We drove out to the working face and got to work preparing the trailer. It was windy, and we laughed that trash was blowing all over us. I saw that there was a lot of medical packaging blowing around. I looked down and saw that I was standing on a fairly large spread of medical waste, including syringes, catheters, and other indistinct but clearly biohazardous items.