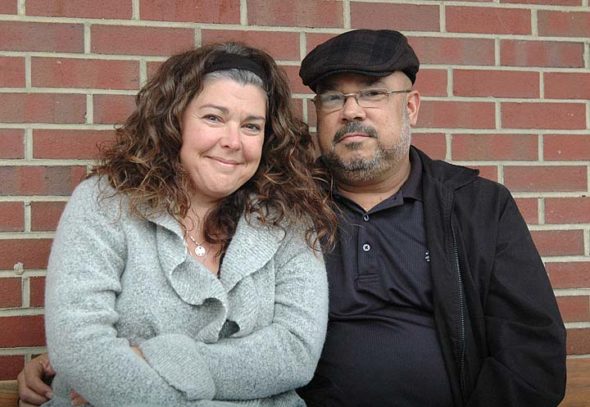 Kelley Fox was diagnosed with multiple myeloma, a rare form of cancer, in August. The Yellow Springs native retired from the Village in 2014 after 30 years of service, most recently as superintendent of electric and water distribution. He also served as an MTFR firefighter for 17 years. Here, he’s pictured with his wife, Christina, outside Tom’s Market, one of Kelley’s favorite local people-watching spots. (Photo by Audrey Hackett)

Fighting cancer, but not alone

Peach’s is holding a benefit event on Saturday, Dec. 17, from noon to 1 a.m. to raise funds for lifelong villager and former Village employee Kelley Fox, who is battling a rare form of cancer called multiple myeloma. Local bands will play all day, and there is a suggested $5 donation at the door. Fox was diagnosed in August, and is undergoing treatment for the disease. He and his family say they’re grateful for the outpouring of love and support they’ve already received from friends and neighbors in Yellow Springs.

For 30 years, Kelley Fox helped keep the lights on and the water running in Yellow Springs. He retired from the Village in 2014 as superintendent of electric and water distribution — having seen villagers through countless power outages, ice and wind storms and a hurricane or two. On top of that job, he was a firefighter with Miami Township Fire and Rescue for 17 years.

“Tina used to say, ‘Take your shoes off and relax,’” Kelley said last week, referring to his wife of 25 years, Christina Fox. “But I never could.”

Christina chimed in. “Every time people were running away from something, Kelley was running toward it,” she said.

That willingness to squarely face adversity is a trait Kelley needs now more than ever. In August, the Yellow Springs native was diagnosed with multiple myeloma, a rare cancer that attacks the plasma cells in the blood. The illness has no known cause. It tends to affect older people; at 55, Kelley is younger than most who develop the disease. Treatment involves a combination of chemotherapy and a stem cell transplant — a major procedure that carries risks as well as benefits.

Yet Kelley seems undaunted. After the initial shock of the diagnosis, his natural optimism kicked in, he said.

“Everyone in life has a pretty major thing they’re dealing with,” he reflected. “This is my burden to deal with. And as I quickly found out — I’m not dealing with it alone.”

The outpouring of support in Yellow Springs has been extraordinary, the Foxes said. People have offered to cook meals, take the family’s trash cans to the curb and pitch in to keep the family business, Fox Trot Services, up and running through Kelley’s illness. And it’s not just current villagers who have responded. Many former villagers — “people I haven’t talked to for 40 years,” Kelley said — have offered prayers, thoughts and many forms of kindness.

“We feel the love,” said Christina, who attends First Presbyterian Church and works as the church secretary there.

One of the family’s most pressing needs is financial help. As a retired public employee, Kelley is grateful to have health insurance. But insurance doesn’t cover everything. Kelley takes 15 medications in addition to daily chemotherapy pills and twice-weekly chemo infusions. The co-pays for medication and doctors’ visits add up, Christina said.

Because multiple myeloma can ravage a person’s bones, Kelley was put on a bone-strengthening drug. One side effect of the drug, however, is a painful condition known as osteonecrosis of the jaw, which Kelley developed this fall. His health insurance doesn’t cover treatment.

“The bills are stacked up right now,” said Christina, despite her efforts to work out payment plans.

And there’s another concrete way villagers can help. On Saturday, Dec. 17, from noon to 1 a.m., Peach’s is holding a benefit event for Kelley. Local bands will be playing all day, and there will be a suggested $5 donation at the door. All funds raised at the door will go to the Fox family, according to Christine Monroe-Beard, co-owner of Peach’s. Kelley’s son, Tyler, works at the restaurant, and the Beards have known Kelley for a long time.

“Kelley has been a fantastic asset to our community for his entire life,” she said.

Born and raised in Yellow Springs, Kelley attended Yellow Springs schools and began working for the Village not long after graduating from high school. He was hired by former Village Manager Kent Bristol in 1984, initially as a seasonal worker, then full time. “He was effective and fun to work with,” Bristol said by phone last week. “I think a lot of him, and so many others do, too.”

Monroe-Beard is confident that villagers will respond. “Yellow Springs is a very band-together sort of community,” she said. “I know the community will rally.” And past fundraisers at Peach’s have shown her that strangers, too, are often eager to help a worthy cause.

Kelley said he’s hoping to make an appearance at the Dec. 17 event. “If my ‘fighting numbers’ are good enough, I’ll be there,” he promised. What Kelley calls his “fighting numbers” are his red and white blood cell counts. Keeping them reasonably high is crucial to maintaining his health and energy.

Yet fatigue is a major challenge. Until this week, Kelley had continued working for Greene County CATS, a job he began six months before retiring from the Village. He would get up for work at 5 a.m. to drive a morning route that served disabled riders. The riders kept him going, he said. On chemo days, he would head after work to the Grandview Infusion Center in Beavercreek, where infusions can take up to five hours.

But as of this Monday, he is simply too fatigued to push himself to do the work he loves.

“I have no idea how he did it for so long,” Christina said.

The family’s income has dropped as a result of Kelley’s need to stop work, increasing their financial pressure. They were hoping this step wouldn’t come until January, Christina said.

Meanwhile, the family is “hoping and praying” that Kelley’s last chemo treatment will be Dec. 31, she added.

But that last treatment is not the end of the family’s ordeal. The next step for Kelley is a huge one, a stem cell transplant, to be performed at Ohio State University’s James Cancer Center early next year. Doctors typically wait for 30 days after the end of chemotherapy before attempting a transplant, according to Christina. Testing will determine if Kelley’s illness is in remission, and if it is, some of his healthy stem cells — the cells that give rise to various components of the blood — will be extracted. Then Kelley will be given massive doses of chemotherapy to kill the rest of his bone marrow cells. Finally, the harvested stem cells will be transplanted back into his bone marrow, where they will begin to regenerate.

The procedure will wipe out his immune system, according to Christina. He will be in isolation in the hospital for a while, then confined to the family’s Kingsfield Court home for months. He’ll be unable to work during this time, and infection will be a constant threat.

“I’ll make sure everything is bleached every minute of the day,” Christina said. “We’ll keep him in a bubble.”

A year after the transplant, Kelley will receive his childhood immunizations again. And he’ll be on “maintenance chemo” for the rest of his life.

His illness has been hard on Christina and their adult children, Tyler and Kelsey, who still live at home, as well as Kelley’s two adult children from a former marriage, Alisia and Cindy. Alisia, who lives in Fairborn, took a semester off school to help. And Tyler and Kelsey have had to step up in the family business, according to Christina.

“I couldn’t do it without them,” Kelley said.

“We couldn’t do it without you,” his wife quickly responded.

Asked what sustains him, Kelley answered, “God and my family and the support of this community. We’ve had more prayers and support than you can imagine.” He paused. “In these times, it definitely brings back your trust in humanity.”