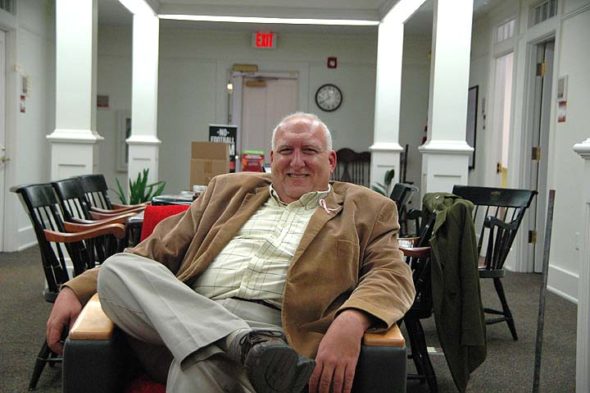 Bill Carter is Antioch College’s new dean of admission and financial aid, replacing interim director Harold Wingood. Carter brings 25 years of higher education admissions experience to the post, with a focus on recruiting diverse students. He began at the college on Oct. 17. (photo by Audrey Hackett)

Bill Carter is a data guy. He’s already looking forward to the release, still years away, of the 2020 U.S. Census. And meanwhile, he’s digging into demographic data from community colleges, SAT and ACT testing agencies and other sources to identify and target prospects for Antioch College’s next class — students who will enroll in the fall of 2017.

Carter, 55, was hired by the college this fall as dean of admission and financial aid, replacing interim director Harold ­Wingood. He started on the job Oct. 17, bringing 25 years of higher education admissions experience to a role that is crucial to the college’s success. This year, amid a reduction in financial aid offerings, turnover in the admissions office and other factors, Antioch fell short of its recruitment goals, enrolling just 44 students in the incoming class, versus the 75 to 80 forecast by college leaders.

But in Carter, the college believes it has found a seasoned administrator who can pull together the admissions program to boost enrollment next year and beyond.
“Bill really stood out,” said Provost Lori Collins-Hall, who led the search committee for the position. “He was somebody who was innovative and creative and thought on the edges of higher education recruitment.”

Carter said in a recent interview that he was drawn to the Antioch job for a few reasons. He loved the small size of the school, a change from his most recent position at the University of Tennessee’s Health Science Center in Memphis. And he felt he was getting an opportunity to build an admissions program from the ground up.

“Anyone in enrollment management would love this challenge,” he said. “It’s rare to be able to build something and really make it matter.”

Carter, a Chicago native, began in the field when he was still in college himself. As a sophomore at Elmhurst College outside Chicago, he was a student worker in the admissions office. He liked the work, returning a few years after graduation to a position in Elmhurst’s admissions department. “[That was] back when we still used index cards,” he added.

He learned the art and science of college admissions from an Elmhurst mentor who believed that the future of higher education recruitment lay in data analysis and statistical modeling. “He brought the whole world of math into it,” Carter said. As a history major with taste for math and physics, that suited Carter just fine.
He went on to lead admissions departments at several colleges and universities, including Fisk University, the historically black college in Nashville, and Texas A&M University in Kingsville, a federally designated Hispanic-serving institution. Recruiting diverse students, many of them first-generation college students, has been a particular focus of his work.

“I’ve spent most of my career with diverse students and families,” he said.
And that’s a strength he brings to Antioch, according to Collins-Hall. “We’re very focused on first-generation recruitment,” she said.

Five weeks into his job at the college, Carter is already revving up and revamping the admissions program. Carter’s guiding philosophy is to recruit not just the student, but the whole family. “College is an investment. It’s just as important to communicate with the family as it is with the student,” he said.

He is placing more emphasis on recruiting in Ohio and surrounding states, given that about half of this year’s incoming class hailed from Ohio. The college’s four admissions counselors are traveling to high schools throughout Ohio, targeting schools that have environmental clubs or social justice initiatives — passions that draw students to Antioch. And Carter is working to bring more students and high school guidance counselors from the region to the campus to experience Antioch for themselves.

“The days of throwing a dart at the map and traveling there are over. You have to be very methodical,” he said.

At the same time, Carter is developing new strategies for recruiting students further afield. For example, responding to alumni interest, he is building an alumni recruitment team, or ART, consisting of graduates in select areas of the county who will be trained to represent Antioch at college fairs and other outreach events. He hopes to launch the ART program later this winter in a few cities, likely including Washington, D.C., Chicago and the San Francisco Bay area.

“With alumni, the passion is already there. All they need in some cases is to get updated on what’s changed and what we’re offering now,” Carter said.

The college doesn’t yet have firm targets for the size of the class that will be entering in 2017. “We’re looking for purposeful growth, not just numbers,” Carter said.

Though demographic and academic data is the foundation of all these outreach efforts, the college doesn’t look at “just numbers” in deciding which students to pursue and, eventually, admit. For example, Carter said he takes SAT and ACT scores not just with a grain of salt, but “a block of salt.” And the bottom-line GPA (grade point average) is far less important than the trend and pattern of a student’s academic achievement, as well as factors like extracurricular passions and ­volunteerism.

“The holistic approach to admitting students — that’s always been there,” he said.
Financial aid is another piece of the puzzle. With the full-tuition Horace Mann fellowships a thing of the past, the college now needs to tailor its financial aid packages to individual students, offering some combination of merit- and need-based financial assistance. There’s no word yet on what financial aid will look like for next year’s incoming class, according to Carter, though it will likely continue to substantially offset tuition costs.

Spending his days amid figures and formulas, it is a breath of fresh air to encounter actual students. They’re ultimately the reason his work is so exciting, Carter said. “At smaller schools especially, you build relationships with students and families, you really get to know them.”

As a newcomer to campus, Carter said he’s been deeply impressed by Antioch students.

“They’re friendly, outgoing and brutally honest. I love their openness, their inquiry,” he said.

Currently living in Beavercreek while looking for a house in or near Yellow Springs, Carter said he’s happy to be here. Ye Olde Trail Tavern is already a favorite haunt. He has parents in Asheville, N.C., and three grown children in Texas. And after 25 years in the world of college admissions, he’s settling in for what he hopes is the last, great challenge of his career — bringing bright, engaged students to a college, and a world, that wants and needs them.

“These students are powerful, and they will empower others,” he said.