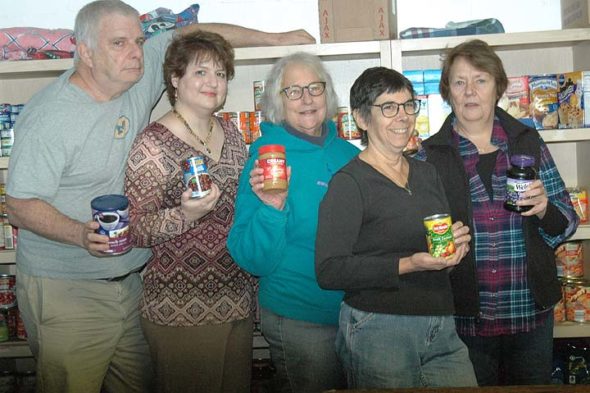 The Yellow Springs Food Pantry, located in the basement of the United Methodist Church, is one of several nonprofits that aim to address the needs of villagers who struggle financially. Shown above are volunteers David Robinow, Bethany Gray, Sue Bothwell, Paula Hurwitz (the pantry’s director) and Pat Robinow. The pantry provides food for residents of Yellow Springs and Clifton on the second and fourth Thursdays of the month from 2 to 4 p.m. (photo by Diane Chiddister)

“People can live here and not realize that there is need in the village,” said Paula Hurwitz, who manages the Yellow Springs Food Pantry. “It could be your neighbor. Yellow Springs is small and we think we know people. But people who are struggling don’t often make it known.”

Kate Anderson, a member of the Village Assistance Network, or VAN, has been trying to learn more about the level of food insecurity in town, largely through anecdotal information. She’s been been surprised, she said, at what she perceives as a growing number of families who struggle with not having enough to eat.

“Yellow Springs has become gentrified and the median income is high. Those with lower incomes are struggling,” she said.

In this holiday season, villagers who want to help local people in need can donate to several nonprofits that provide either food, financial help, winter coats or Christmas gifts to villagers who need them. And while the volunteers provide different services, each emphasizes that they try to make sure recipients live in Yellow Springs (and, for the food pantry, Clifton as well).

In her second year of overseeing the food pantry, Hurwitz noted that the pantry served more than 80 families this year. Located in the basement of the United Methodist Church, the pantry is open the second and fourth Thursday of each month from 2 to 4 p.m., except Thanksgiving. Any village resident is welcome. The pantry provides non-perishable items such as canned goods, pasta, rice and cereals, for free.

“We go through peanut butter, jelly and coffee rapidly,” she said. “I think those are staples in a lot of homes.”

Always needed as well are taxable items, such as paper goods, toothpaste and shampoo.

Those served by the pantry are a diverse group, according to Hurwitz, who is assisted by a group of about 70 volunteers.

“Some need help temporarily and some are regulars,” she said. “Some are families, some are single, and there are young families on up to seniors.”

Those who want to donate food or money may come to the pantry during its open hours, or place food in the food pantry barrels located in Tom’s Market and the Bryan Center. Currently, the barrel contents are picked up weekly. Checks can be mailed to the pantry at 202 S. Winter St., Yellow Springs.

A new effort, started by villager Kim Horn, complements the longstanding and larger food pantry. Located on the Walnut Street side of the First Presbyterian Church, the Little Free Pantry is a roadside “cupboard” stocked with nonperishable food items and some toiletries. Any villager may take items at any time if needed, and donations are always welcome.

The demands of winter increase the level of need in many homes, and for several decades the Yellow Springs Police Department has attempted to respond with its Coat Fund. The fund was begun several decades ago by longtime Police Chief Jim McKee and the late Mary Ann Bebko, who also started the food pantry.

“Jim and Mary Ann both had the pulse of the community, they knew who was in need,” according to former Chief John Grote last week in an interview. “They saw kids on patrol and walking to school without the proper clothing, and came up with a plan to help them.”

Each fall Mills Lawn school employees identify kids who need coats, boots or hats and scarves, then talk to parents to verify the need, according to Mills Lawn Principal Matt Housh. The names are passed on to the police department, and police, Village and school employees take the children shopping for the winter clothes, according to Police Chief Dave Hale this week.

Last year, the coat fund purchased coats and boots for about 26 children, and the fund was also used to help eight other children in need, according to Hale. Because the fund most often has money left over after purchasing coats, it’s also available to respond to emergency needs involving children. Hale has established a board comprised of himself, Sergeant Naomi Watson and two citizens to respond to requests for the funds throughout the year. Those who wish to donate may contact Chief Hale or Sergeant Watson, or send a check to the Coat Fund at the department, 100 Dayton St., Yellow Springs.

In his second year as chief, Hale hasn’t been in the job long enough to know if local need is on the rise. However, Principal Housh said that at Mills Lawn, it appears there are an increasing number of children from families that struggle financially.

“We’re aware of a cohort that struggles to make ends meet,” Housh said last week. “Over the past three years we’ve seen needier families than previously.”

Part of that increase may be related to higher Village utility bills, according to Chrissy Cruz, who started the $10 Club, a relatively new effort that responds to villagers’ need for immediate help of under $200. The group responded to 27 families in need last year, with individuals most frequently requesting help because Village utilities were about to be disconnected. In September, the fund assisted four families that were faced with utility cut-offs, Cruz said.

Cruz started the fund when a friend needed $200 to keep her utilities running. While she couldn’t help with the whole amount, she figured she could chip in $10, and thought others might do the same. So she posted a request for the funds on Facebook, and donations quickly arrived. Now, when she becomes aware of a need, she posts the request on a Yellow Springs-related Facebook page.

Referrals are mainly word of mouth, and those with a need may call her at 270-4722. Those who wish to donate may contact her directly, or go online to the web sites tendollarclub.weebly.com and ysvan.weebly.com to make donations through PayPal.
Because Cruz didn’t want to be the only person responsible for deciding who receives donations, she formed the Village Assistance Network, or VAN. Other VAN members are Jane Nipper, Lindsay Burke, Wendy Ricks and Kate Anderson.

Another longtime local effort to help the needy — and one also connected to Mary Ann Bebko — is the holiday Share the Joy project at the Yellow Springs library. For a few weeks each year, beginning around Thanksgiving and heading into Christmas, villagers who lack the resources to provide gifts for their families make their needs known to project organizers. Organizers then post specific requests on a small Christmas tree prominently displayed in the library.

The project is linked to a long-ago effort by Bebko and Juanita Richardson to deliver holiday food baskets to needy villagers, according to project founder Olga Harris. Inspired by gift trees at K-mart, Harris, who worked at the library, suggested to Bebko and Richardson that the library feature a tree on which gift requests are displayed. The project was launched and has continued for more than 25 years.

Last year, the Share the Joy tree served 38 families, according to organizer Kate Anderson. The process of both requesting gifts and giving gifts is anonymous, with those seeking help filling out a form at the library that’s vetted by project organizers, after which a tag is placed on the tree. A donor then selects a tag from the tree, purchases the gift and then returns it to the library, all without knowing the name of the recipient.

Requests have run a gamut of needs, often including toys, clothing and food, although requests for gift cards and electronic items have been on the rise, Harris said.

The Share the Joy tree is already up in the library, according to Anderson this week, and interested persons may select a gift to purchase and return to the library by Dec. 16. Gift requests can be made until Dec. 2 at the library.
What all of the project organizers have in common is tremendous gratitude to villagers who respond to these calls for help.

“I’m constantly awed by the generosity of our community,” Hurwitz said.

And Anderson believes there are two reasons why all villagers should at some point get involved in one of these efforts.

“First, they see the needs of the other side of the village,” Anderson said. “And second, they get to see generosity here. I’m always amazed at how people step up.”