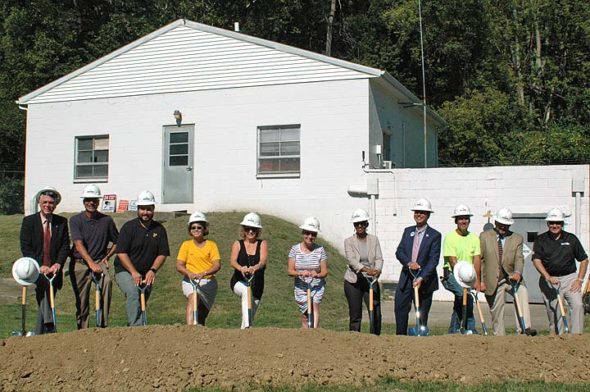 A groundbreaking ceremony kicked off construction of Yellow Springs' new water treatment plant. Construction of the plant, which will cost $7.2 million, begins on Oct. 1 and will take approximately 15 months. (Photo by Audrey Hackett)

Village Council members had, as usual, full plates of business on their agendas in 2016. This year Council members approved rate hikes to shore up Village utility funds, took the first steps toward a municipal solar farm, created two new Village commissions, began construction on a new water plant, deliberated how best to maintain Village sidewalks and saw the completion of the first Village/Home, Inc. affordable housing project, among other agenda items. And the Center for Business and Education, or CBE, once again grabbed the spotlight, as Council considered how best to move ahead as new owners of the land formerly slated for development of a commerce park.

In the winter of 2016, Council heard a recommendation from its electric consultant that rates for Village electricity be raised, due to recent deficits in the electric fund. Council approved the recommended rate hikes in the spring, and the increases went into effect in July. Residential users saw their rates rise about 12 percent, with businesses seeing a 9 percent average increase.

The rate hikes contributed to the distress of some villagers over the summer that their utility bills were double or triple their previous rates. While the rate increases were a factor, excessively hot weather, which led to more electric and water usage, also played a role in the increases. Adding to the confusion, changes in the utility billing system and new electric meters coincided with the rate hikes, leading to some mistakenly high bills and complaints from villagers. Council later approved the purchase of new software to better handle changes in Village utility billing.

The rate hikes accomplished their desired effect when the 2017 Village budget showed no more deficits in utility funds in the coming year. However, some villagers appeared to be struggling with the rate increases, as the $10 Club, a local effort to give short-term financial help to villagers in need, reported that the most frequent request this fall was for help with utility bills.

In 2016, the Village moved closer to creating a municipal solar farm, with Council early in the year giving approval for Village Manager Patti Bates to contract with a solar power company to construct a 6.5-acre 1-megawatt farm on the western edge of the Village-owned Glass Farm. The power/purchase contract stipulates that the company construct the farm and maintain it for a 10-year period, during which the Village would purchase solar energy. At the end of the 10 years, the Village would hold the option of purchasing the solar construction.

The move followed a recommendation from the Village Energy Board about a year ago that the Village create a solar farm.

Later in the year, contract negotiations with the selected company fell through, and in December, Council approved moving ahead with a contract with AEP Onsite Partners to construct the farm.

In February, Council approved putting on the March ballot a renewal of the Village’s five-year 8.4 mills property tax levy, citing the need for sustainability in the Village general fund. The levy provides about $744,000 yearly to the general fund, or about 20 percent of general fund revenues.

In March, village voters overwhelmingly supported the levy, with 80 percent of voters approving the levy renewal.

In the spring, Council put out a call for citizen volunteers for a new Beaver Management Task Force, a nine- to 12-person group of Glass Farm neighbors, stakeholders and beaver experts to address the challenges presented by the small group of beavers that have taken up residence in the Glass Farm wetlands. The group began meeting shortly after.

In the summer of 2016, the economic development group Community Resources notified Council that it intended to transfer the land designated for the Center for Business and Education, or CBE, to the Village. Community Resources had purchased the land in 2004 largely with Village funds,  with the goal of creating a commerce park. However, after many delays and a request for additional Village funding, village voters resoundingly defeated Village funding for the CBE in November 2014, after which the project has been dormant. The transfer of the CBE land to the Village was in exchange for forgiveness of the $300,000 loan from the Village for its purchase.

Controversy around the latest iteration of the CBE swirled for several months in the fall, after Council announced its intention to extend utilities to the property entrance. The utility extension, while funded by a federal grant, prompted opposition from some villagers for what they perceived as Council moving ahead with a project that villagers already rejected.

Council slowed what seemed to some a too-rapid process, and stated that a process for soliciting community input regarding the use of the land would take place in early 2017. Council approved the utilities extension in late fall, and work began in December.

During 2016 Council continued to consider whether to add municipal broadband as a new Village utility, as recommended by the Springs-Net group. Council held a work session with the group in the spring to address questions, after which Council approved the hiring of a consultant to conduct a feasibility study. In December, the consultant distributed a survey for all villagers in order to gauge potential use of broadband.

Construction on the long-awaited new Village water plant began Oct. 1. The new plant will replace the Village’s current 50-year-old plant, at a cost of about $7.2 million. The decision to build a new plant followed several years of Council deliberations over the best options for sourcing Village water, including obtaining water from Springfield and rehabbing the old plant. Constructing a new plant ultimately won out as the most efficient and cost-effective option, and construction is expected to take about 15 months. 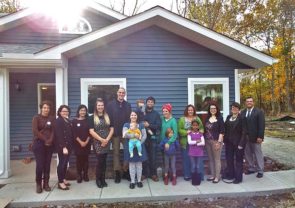 Six years in the making, the Cemetery Street affordable housing project came to completion in 2016. The project was the first partnership between Home, Inc. and the Village of Yellow Springs.

Located on Cemetery Street on the north end of the village, the project included four single-family homes. At the end of January 2016, the McCowan/Benning family, the second family to move in, joined the Wyatt family on Cemetery Street. In November, the final two homes were finished, and the Schaade family and Hange family moved in.

All together, the project provided housing for 20 individuals, including 11 children.

In December, Council received a recommendation from Council members Marianne MacQueen and Gerry Simms that the Village continue the status quo on local sidewalks, thus foregoing an expensive repair project.

MacQueen and Simms had studied the issue, following up on several years of various Village Councils’ attempts to address the village’s 17.2 miles of sidewalks. Before 2011, villagers were expected to pay for repairs and upgrades to sidewalks in front of their properties, but the unpopular policy was rarely enforced, leading to many subpar sidewalks. In 2011, Council agreed that sidewalks are a part of the -Village transportation system, and therefore Village government should pay for sidewalk repairs. Several years ago, then-Village Assistant Manager John Yung recommended that all sidewalks be brought up to Americans with Disability Act, or ADA, standards, an upgrade that would cost $4.2 million. Since then, Council has been at a standstill on the topic, although last year there was talk of putting a sidewalk levy on the ballot to fund the upgrades.

However, MacQueen and Simms concluded that Village sidewalks are mainly walkable, especially since the replacement of Xenia Avenue sidewalks between downtown and the Friends Care Community in recent years. Due to the substantial expense, the two Council members recommended that only significantly subpar sidewalks be repaired.

Council will continue the discussion in 2017.

In December, Council approved its Village budget for 2017. The budget showed lower spending than in recent years, with overall Village spending at around $9.5 million, compared to $11.1 million last year, a change linked to cost-cutting measures and a decrease in capital project spending.

The Village general fund also showed a decrease in spending, with local tax revenues largely steady and a general fund deficit of about $33,446, lower than last year’s $87,244 deficit.