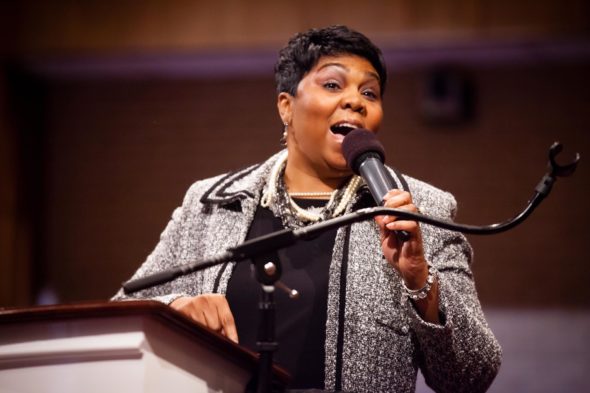 Rev. Traci Blackmon, a national voice for social justice, will speak at Antioch College on Tuesday, Jan. 17, at 7 p.m. (Photo from UCC website)

A powerful voice for social change is coming to Antioch College. Rev. Traci Blackmon, an executive in the national United Church of Christ and a leader in the Black Lives Matter movement, will be the keynote speaker at the Coretta Scott King Center’s annual Martin Luther King, Jr. Celebration.

The keynote will be held Tuesday, Jan. 17, at 7 p.m. at the Wellness Center on the Antioch campus. The event is free and open to the public.

In addition to her role in the national UCC, Blackmon is the first woman pastor of the 157-year-old Christ the King UCC, near St. Louis, Mo. Blackmon came into national prominence after the 2014 police shooting of Michael Brown in Ferguson, Mo., just miles from Christ the King, emerging as a protest leader and a member of the Ferguson Commission, which sought to bring change and healing to the region.

National UCC leaders have described Blackmon as a “voice for new civil rights in America” and a “game changer.”

Also at the Tuesday event, the Coretta Scott King Center will present its 2017 MLK Drum Major for Justice Award. The award is given annually to an Antioch College faculty or staff member in recognition of their commitment to social justice, diversity and inclusion.

And on Martin Luther King, Jr. Day itself, Monday, Jan. 16, the Center will host a gathering at 9 a.m., in advance of Yellow Springs’ annual MLK walk.