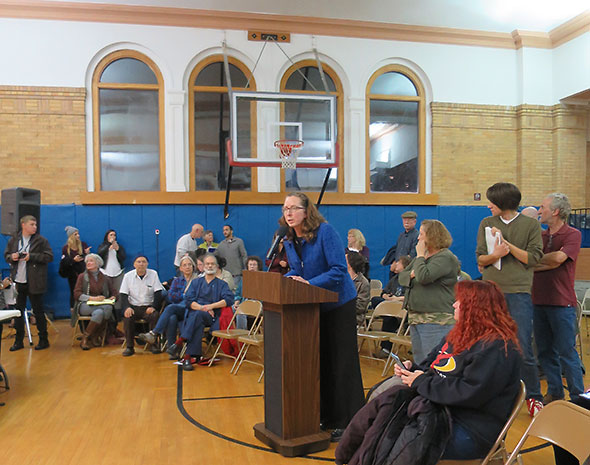 My friend Allen Hunt sent a letter to the editor this past week. He voiced his concern about the police’s impolite disruption of this year’s New Years celebration. He penned his critique of their tactics in terms of fluid mechanics.

My family met up with Allen and his family under the celebration’s disco ball shortly after midnight. We hugged, wished each other good fortune in the New Year, then all left together heading north on Xenia Avenue. Our destination was the Spirited Goat; our intent was to buy a round of hot chocolate.

We were in a good mood, moving comfortably through the large crowd with our young children and even our dog who was having a lovely time asking people for pets. When we emerged from the crowd, we were confronted by a squad car driving towards us. The vehicle had its lights flashing and whoever was inside chirped the sirens at us. We got out of way and watched perplexed as the patrol car rolled past us. “What’s the deal?” We wondered out loud. No one spoke to us from the vehicle; no one on foot offered instructions or an explanation. Allen’s wife and I speculated whether we should be offended or alarmed. When we turned our attention back north, we realized suddenly that something was seriously amiss. We were walking in the street like we do every year knowing we’re protected by the barriers at Corry Street and Xenia Avenue. Suddenly, however, we realized that there were no barriers. They had been taken down already. Alarmed, we shouted to our children “Move to the sidewalk. Now!”

The crowd that we left behind was still near peak population. We were among the earliest to leave the scene. What struck Allen—a physicist who specializes in nature’s flow rates—was the sheer ineffectiveness of the officers’ actions. By closing the roads early and forcing people onto the sidewalk, the police force reduced the area of egress by roughly an order of magnitude. Thus “By the equation of continuity,” Allen reasoned in his letter to the editor, “pedestrians would have to increase their walking velocity by a factor of 10 in order to get people out at the same rate.” He concludes, “Clearly an unworkable rate, and an unsuited strategy.”

You’ve got to love science. It tells us why what the officers did was such a curious, confusing action. They wanted us to leave early, they wanted us to leave fast, but at the same time they frustrated anyone making to leave as well as anyone wishing to linger. Whether leaving or lingering, good people were flipped unceremoniously out of a comfortable bed into a storm. We seek shelter in a storm. However, here, police removed shelter: The secure perimeter was disassembled before the crowd dispersed; loud sirens and bright flashing lights were introduced into a confined space; unyielding metal was set against flesh.

When my man grabs the bed covers on a cold night, I tug back. I tap him on the shoulder and ask him to yield back my share of the covers. If he ignores me, I get annoyed. If he doubles down and sweeps up all the covers, I get angry. In the human hierarchy of needs, we require some basics…food, water, shelter. Often overlooked, we need one more essential…information we can act on. Now, if officers yank a surprise over a large group of people, they are going to have trouble managing the response. They can’t stiff arm folks just trying to figure out what gives. They have to be prepared to engage people respectfully, to manage expectations, to ease a transition instead of frustrating it.

As Allen points out, we have options: mindless congestion, rapid transportation, or wide open two-way streets.

Allen and I are academics. We engage regularly in peer reviews where colleagues cut up each other’s work. We risk skepticism. We know that when we can get other people’s eyes on our work they can reveal imperfections that hide from us. If we try to do everything ourselves, our untested perspective—naturally warped by nature—undermines that work.

My hope is that the village and county can learn from this situation. If they can acknowledge where things went wrong and hold the institution accountable, if they can resist the urge to punish people who got confounded by confusing cues from authority, if they themselves can respond to the provocative show of force and break the cycle of rage it initiated, we will break down the spider traps that have formed in our community and build a living shelter in their place.