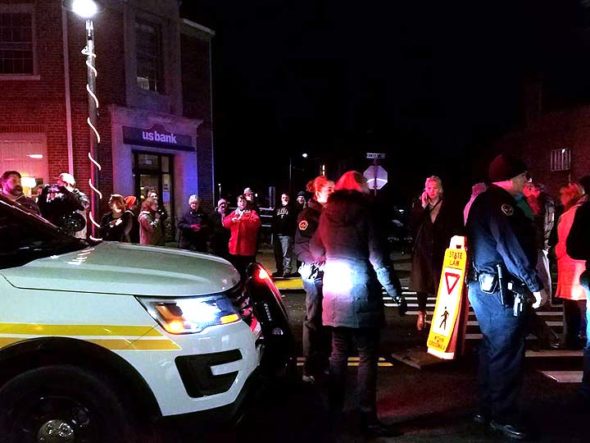 More than 100 people gathered at the First Baptist Church from 3 p.m. to 4:30 p.m. today to express their distress and ask questions regarding the interactions between police and villagers downtown on New Year’s Eve. The event was organized by the 365 Project, and Gavin DeVore Leonard of that group moderated.

While meeting organizers attempted to educate participants regarding groups already in existence that address issues of police/community relations, such as the Human Relations Commission, or HRC, those gathered had a need to vent their anger and frustration at the New Year’s Eve events.

“By all these people being here today, it says there’s a deep concern,” said Neal Crandall.

“There was a taser deployed in a crowd and it missed. It could have hit a child,” another man stated.

Many asked questions about the incident, including who in the police department was in charge on New Year’s Eve, and how the decision to disperse the crowd in the manner used had been made.

However, Leonard and others present, including Village Council President Karen Wintrow, emphasized that answers to those questions aren’t yet available. While the questions will be addressed at tomorrow’s Village Council meeting, the situation is still under investigation and answers to all questions may not be available immediately, she said.

Participants broke into small groups to articulate questions they want answered at the meeting. The Council meeting, at 7 p.m. on Tuesday, Jan. 3, will take place in the Bryan Center gym in order to hold a larger-than-normal crowd, Wintrow said.

Yellow Springs Chief of Police released a press statement at about 3 p.m. this afternoon regarding the police department’s version of events that transpired on New Year’s Eve, leading to the arrest of villager David Carlson, 29.

This is the first official statement from the police regarding the events around the New Year’s Eve Ball Drop two days ago.

According to the statement, Carlson appeared inebriated and began leaning into an occupied police cruiser holding an officer attempting to disperse revelers following the New Year’s Ball Drop. When asked to back away from the car, Carlson failed to do so, pushing back when an officer attempted to open the car door, the statement says. According to the statement, when the officer opened the door with taser in hand, Carlson grabbed the taser from the officer and fled into the crowd.

Officers pursued Carlson, who struggled against the officers and another officer “deployed their Taser unsuccessfully,” according to the statement, after which Carlson got up and ran into the crowd.

At 12:52 a.m., police responded to a call regarding a possible physical altercation at the Gulch on Dayton Street, where they found Carlson and took him into custody without incident. The arresting officer was RJ Hawley. Carlson remains in the Greene County Jail pending the prosecutor’s review of the case.

Hale said today he would not comment at this time regarding other factors involved in the New Year’s Eve events, including why police attempted to disperse revelers with police cars blaring sirens and lights at eight minutes past midnight, and who was responsible for that decision. Issues regarding the evening’s events will be addressed at Council’s regular meeting tomorrow evening, Jan. 3, at 7 p.m. in Council chambers, according to Hale.

Earlier, Aaron Willis, a friend of Carlson’s, said in an interview with the News that his leg had been hit by the taser when he stepped in front of his friend after he saw Carlson struggling with police and being tased. Willis said he has a mark on his leg from the taser.

According to longtime villager Theresa Thinnes on Monday morning, Jan. 2, her son, Aaron Willis, was one of the two young men tased by Yellow Springs police on New Year’s Eve, although Willis was only tased in the leg by accident because he came between Officer Allison Saurber and David Carlson, who was her target.

Carlson was later arrested and he remains in the Greene County Jail.

Villager Anna Carlson, no relation to David, who works at the Emporium, said on Monday morning that she was about 10 feet away from the event and saw the man being tased.

“I saw an officer grab the head of the man and throw him to the ground,” she said, and when the man attempted to get up, Officer Saurber tased him, at which point he fell to the ground again.

“It was upsetting. I felt unsafe,” Carlson said.

At that point, people began getting between the man and the police in an attempt to protect him, according to bystander Ali Thomas.

As of Monday morning, Police Chief Dave Hale has not been available to confirm details or speak about the incident, nor has the incident report been completed, according to Dispatcher Rita Check. According to Village Manager Patti Bates on Monday morning, the chief is currently reviewing the information and will speak later in the day.

On Monday, Village Council member Marianne MacQueen shared with the News a letter she wrote to Council regarding the incident, which she witnessed.

“The negative turn of events last night was caused by the inappropriateness of police action,” the letter concludes. “Fortunately, and apparently, no one was seriously hurt. The Village Council of Yellow Springs needs to understand why this happened. But more importantly we need to make sure that it does not happen again. Did this represent a single breakdown in communication, or is it representative of inadequate training and communication within the Yellow Springs Police Department? What needs to happen to change this? I appreciate that Patti Bates and Chief Hale will be providing a report on this matter at our Council meeting on Tuesday. I also request that Council be provided with a detailed plan to insure that ALL our officers learn how to respectfully treat peacefully congregated citizens, in a way that contributes to the sense of community rather than engenders fear and antagonism.”

The News will update this post after speaking with the chief.

The annual Yellow Springs New Year’s Ball Drop on Saturday night turned from peaceful to chaotic and “horrifying,” according to several participants, after Yellow Springs police drove through the crowd with sirens blaring, reportedly tasing two participants, one by accident.

The police action took place at the village’s longstanding Yellow Springs Ball Drop, when at midnight a ball is dropped on Short Street as villagers celebrate the beginning of a new year.

“What started out peaceful turned into a horrible situation,” according to villager Jennifer Berman, who is special assistant to Antioch College president for community life and restorative justice. Berman was in the crowd when local police began trying to drive slowly through the crowd in an apparent attempt to disperse revelers at 12:08 a.m.

“All of a sudden there were police cars with sirens blaring and lights flashing,” said villager Michael Brown, who, with his wife, Anita, has attended the event for about 25 years. The police presence seemed to suggest “that we were doing something wrong,” Berman said, but the event had been peaceful and joyous.

It was one of the largest New Year’s Eve Ball Drop crowd that Michael Brown had seen, perhaps over 1,000 people. Brown attributed the big turnout to the mild weather.

People became very agitated by the police presence, according to Berman, and many drifted into the street in a nonviolent attempt to block the police cars. When people approached the police, asking why they were driving through the crowd, “the police were very harsh and brusque with people,” according to Anita Brown, who said, “I saw no one being disrespectful.”

Kurt Miyazaki, a co-owner of the Emporium, said he tried to talk to the three police officers in two squad cars as they moved slowly through the crowd. He was not sure of the identity of the officers, two men and one young woman.

Miyazaki said that in a peaceful way he asked police what they were doing, and warned that they could be provoking people. One officer responded that they were just doing their job, while the others did not respond. The police were not talking to people in the street, he said, but were simply driving their cars with the sirens blaring.

According to Berman, when she asked a local officer at the scene why police were attempting to clear the street so abruptly, the officer, whose name she didn’t know, said this was standard practice for the New Year’s event. However, Anita Brown, who has attended the event for about 25 years, said she has never witnessed it before.

Villager Karen Gardner said an officer told her that the police were just doing their job, and that the clearing of the street had been ordered by Sergeant Josh Knapp, although he was not at the event.

According to Gardner, also a longtime attendee of the ball-drop who was in the crowd, one young man approached a local police car saying he wanted to help and was told to back off or he’d be arrested. Someone pushed against the police car door and the officer exited the car, after which several officers chased the man down the street.

Ruth Hoff, who is married to Miyazaki, was close enough to see a struggle break out beside the door of the police car when one officer suddenly burst out of the car and chased the young man. Miyazaki said he saw the man being thrown to the ground near the entrance to the Little Art Theatre. He was one of many people who were trying to insert themselves between the police and the man in a way that was not confrontational, he said. However, he left soon with his son and didn’t witness a tasing.

In a statement on Sunday, Village Manager Patti Bates said, “I don’t have as much information as I would like to have,” and therefore could not comment. Police Chief Dave Hale was not available and the official report on the incident was not complete, according to Dispatcher Randall Newsome.

Miyazaki said he holds the police responsible for the chaotic turn of events.

“It was a typical New Year’s Eve, people were hugging and partying,” he said. “The police created a dangerous situation and then escalated. It could have come out much worse.”

Local police called in back-up, and when Gardner left the scene at about 12:45, about six police cars, including the Greene County Sheriff’s Department and Beavercreek Police, were on the scene, with at least 10 officers present.

A more detailed report on the incident will appear in the Jan. 5 Yellow Springs News.