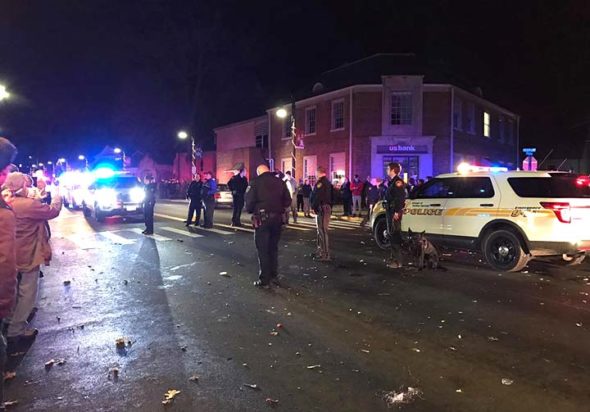 Police from at least six municipalities and agencies joined Yellow Springs police in a presence downtown on the New Year’s Eve Ball Drop that many villagers found hostile and aggressive. (Photo courtesy of Margaret Kinner Fischer)

The annual New Year’s Ball Drop began like any other. People began drifting into the intersection of Short Street and Xenia Avenue, in front of the hardware store, about 11:30 p.m. It was an exceptionally warm and mild evening, so the crowd was bigger than usual.

“The crowd was especially large but very peaceful and happily celebrating; we witnessed a proposal of marriage, everyone was hugging and it was just all so lovely and very Yellow Springs,” said Pan Jeff Reich in a Facebook post.

To Lance Rudegeair, the official ball-dropper for the past 17 years, the event is a family reunion. From his perch on a ladder in front of the hardware, he sees people call out to each other from one side of the Xenia Avenue to the other, then meet in the middle for a hug.

“You can see people moving from one side of the street to the other, hundreds of people, re-uniting,” he said.

In fact, before he drops the ball, Rudegeair usually gives a little speech about how Yellow Springs is a family and this is a family reunion. He asks people to behave respectfully and with kindness toward each other and toward police, although in his 17 years he hasn’t seen any  problems at the event, other than the occasional drunk teenager.

But this year his extension cord wasn’t working, so he was distracted right before midnight and didn’t have time for the speech.

“It seems like a bad omen,” he said in an interview this week.

Rudegeair had noticed that there were police cars at the barricades that blocked off the street, as usual. Every year after the ball dropped, police walked through the crowd, checking to make sure people were okay and gradually shooing them home.

He had dropped the ball and was still up on the ladder when the police car lights began flashing. Then came the sirens. It was 12:08 a.m. The sound was deafening.

“No one could hear anyone else,” he said.

Like many others, Rudegeair thought someone must have had a heart attack or that some other medical emergency necessitated the sirens. But then he realized the police cars were moving slowly down the street.

“All of a sudden there were police cars with sirens blaring and lights flashing,” said villager Michael Brown, who, with his wife Anita, has attended the event for about 25 years. They had never seen anything like it. Usually, people begin drifting away and the police presence, with officers walking through the crowd and talking to people, is benign. But on Saturday people realized that the police were attempting to push people out of the street with their cars.

Police had had a very different take on the evening’s festivities, according to the narrative report on the incident by Yellow Springs Officer RJ Hawley. He saw people clearly intoxicated and holding glass bottles, smelled marijuana and felt hostility from some who were calling out, “F— police.”

“Due to the overwhelming size of the crowd, the levels of purported intoxication observed, the insidious statements that were being made about police officers and the lack of manpower, it was determined that it would be best to attempt to clear the crowd out earlier than has been done in previous years,” he wrote in the narrative.

In the street, people were becoming upset by the noise and flashing lights and the indignity of feeling pushed off the street by moving police cars.

“What had started out as the traditional celebratory end of the year in Yellow Springs was starting to degenerate in reaction to the police presence of driving into the middle of the crowd shortly after midnight,” MacQueen wrote in a letter to Council this week.

From inside the police cars, the officers were feeling mounting hostility, according to the narrative report. Hawley noted that his car was hit and kicked by pedestrians. And one young man approached the car several times shouting obscenities and striking the vehicle, according to Hawley.

Observers didn’t see the young man, who was 29-year-old David Carlson, acting violently toward the officers. However, when Hawley attempted to get out of the car, Carlson shoved the door closed, according to the narrative. Hawley wrote that he also felt trapped by MacQueen, who continued to argue with him.

According to Hawley’s narrative, he made another pass through the crowd, although at the intersection of Short Street and Xenia Avenue, “people were loitering in the crosswalk and made no attempt to move, even though all officers in patrol cars had their emergency lights still activated.”

MacQueen again approached the car, as did Carlson, who was holding what appeared to be an alcoholic beverage in a glass bottle. Hawley said he asked Carlson to back away and while attempting to open the door of the car, both Carlson and MacQueen forcefully shoved the door shut.

At this time Hawley removed his taser from his holster and pointed it at Carlson through the window, the narrative reads. Then Carlson grabbed the taser and ran away with it, after which Hawley pushed the door open, according to the document.

“I’ve never seen a door open so fast,” said Ali Thomas, who was standing nearby. She saw the officer chase the young man through the crowd, then grab him in front of the theater.

“He had his hand on the man’s collar and they both went down,” Thomas said.

And Anna Carlson, who was standing nearby, “saw an officer grab the head of a man and throw him to the ground.”

When Officer Saurber arrived to assist and saw that Carlson was, according to the narrative, resisting arrest, she deployed her taser. However, the taser probes did not function properly, so that Carlson regained his footing and ran away.

However, many who observed thought that Carlson had been hit by the taser. Anna Carlson, no relation to David, saw Carlson hit the ground after the officer fired the weapon.

“It was upsetting. I felt unsafe,” she said.

And Carlson’s friend, Aaron Willis, attempted to step in front of his friend when he saw Officer Saurber using a taser. His leg was hit by the taser, Willis said, and he still has a mark.

At this point, many people attempted to get between Carlson and the officers to protect him from the tasing. Some began chanting, “Police go home.” The mood was increasingly tense. Rudegeair screamed at people to stop chanting, as he feared people would be hurt if tensions escalated. Some shouted insults to the police, who remained calm in the face of the growing hostility, according to Rudegeair.

Miyazaki also tried to work with the crowd to contain the situation, according to the letter from MacQueen, and Village Manager Patti Bates was called to the scene at about 12:30 a.m. Police Chief David Hale was not on the scene.

At some point backup vehicles began arriving from the Greene County Sheriff’s and other municipal police departments. One Sheriff’s officer, Dennis Nipper Jr., who grew up in town, was seen engaging with villagers and succeeded in helping to calm down the crowd, several villagers said.

At about 12:45, the local officers suddenly left the scene, according to longtime villager Karen Gardner.

At this point, many people began drifting away. Carlson had earlier run away from the police, and was apprehended at the Gulch about a half hour later, when police responded to a call of a possible physical altercation, according to a statement by Chief Hale.

Carlson was taken to the Greene County Jail and charged with a fifth-degree felony, obstructing official business, according to his attorney, Laura Curliss, who declined to make a statement this week. On Tuesday he was released from jail on his own recognizance.

At Tuesday’s Village Council meeting, MacQueen announced that she was charged by police with two misdemeanors, obstructing official business and resisting arrest.