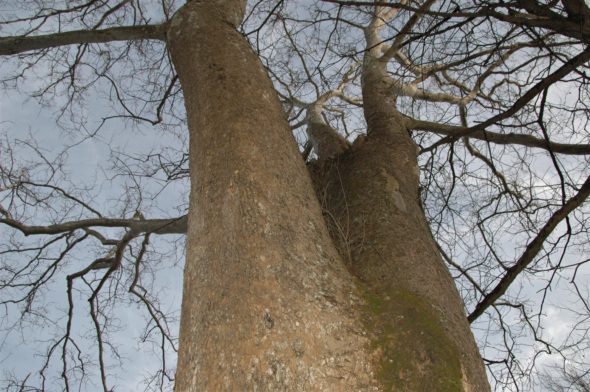 Elect a sycamore-queen! Sycamore in the South Glen, February 2017. (Photo by Audrey Hackett)

Winter aconite is blooming in our yard, yellow flowers unbuttoning the sober brown ground. In another yard, there are snowdrops. Gumdrops, rather, or some kind of candy I imagine to be creamy-minty on the tongue.

Winter was barely here, and now it’s nearly gone. Any really cold day feels like an affront, until I remember: oh, it’s winter. Meanwhile, with delicacy masking iron ambition, spring is cutting in line. Early flowers are paratroopers — the first sent into the field. And in fact each aconite bloom looks like a tiny parachute when it closes at night, and against the cold.

What I will miss most are the winter moons. Last night’s was yellow, its disc just a few shadows from full. Near the horizon, the moon was crisscrossed by trees. Then it broke free, going roadless in the deep wilderness of the upper sky. A different moon opened when I woke, white and glowing like a night flower. Or was it the same moon, and had only my eyes changed?

Winter is a house guest we expect to stay a while. We prepare. We try to be polite. We complain a little, in private. We endure. But this year the house guest is fickle. She doesn’t like our house much. She is as tired of us as we’ve claimed for years to be of her. So she packed light, and left early, and while she was here frequently stayed out all night, dancing with the moon.

As spring waxes, I will also miss the dark. My husband and I have tried to cherish it this winter — which is to say, not chase it away with lights. We’ve let dusk settle in our little house without snapping the dimness to bright. We’ve lit candles. We’ve let ourselves go to bed early. We’ve woken up in the dark at 3 a.m. and simply floated there. The night is a very quiet lake; its waters are vast; it carries you, if you let it.

But … spring. I walked in the South Glen last weekend. The tiny green weeds, some fern-like and intricately curled, were Crayon-bright on the river banks, scribbling over the straw of last year’s grass. The river was brown and slow in the bend of afternoon. And the sycamores, I’m happy to report, still reign.

Theirs is a benevolent dynasty; may it never fall! Sycamore thoughts are exquisite, beginning in the mud and branching into higher math. And sycamore hearts beat with reverential slowness in their capacious woody chests, one beat per human lifetime. If you happen to be in the woods to absorb that beat, you will carry its reverberation to the end of your days.

Incidentally, I would like to elect a sycamore for president. Who’s with me on this? Impeach the noxious weed — the water hemlock that delivers swift, violent death to cattle and humans — and install a sycamore-queen!

Is the world toppling into ruin? It depends on whom you ask. It’s good to ask the newspapers (including this newspaper!). But it’s also good to ask the dark, the moon, the river and the trees. They tell a slightly different story. They seem to speak of loss and return, decay and growth, death and life. As cycles, as a whirling dance. They do not philosophize trouble and harm out of existence. Nor do they counsel inaction. But they do occupy an unshakable place of faith in something older and deeper and more essential than the merely human. And that context — the thing we’re crying out for our news media to provide — is the true context of every human story.

Our lives and times carry consequences far beyond us, of course. Yet we’re also carried, in ways we can scarcely begin to understand, by the young weeds and elder trees. By simple shining yellow flowers emerging, like music, from the earth.

One Response to “BLOG— An older, deeper story”