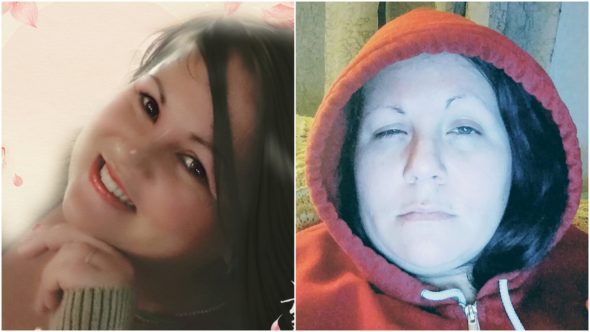 My daughter raised her head from where it was bowed over a plastic bowl, near the couch where she had just been lying. She was matter-of-fact as she said the words, and her face, blanched but for her bright pink cheeks, was stoic.

We’d been having a perfect Sunday earlier that day; we’d come home from Friends Meeting to find a group of neighborhood kids next door whom we had never met. One of them shyly approached as we got out of the car to go inside, and asked me if Lucy was allowed to play hide-and-seek with them. Lucy, having never before had a group of neighborhood kids invite her to play, grasped my hand and half-hid behind the purse I was holding, tentative about accepting. A sudden burst of self-confidence overtook her moments later, and she released my hand and ran to follow the other kids. I should perhaps have warned the other kids that Lucy, while very intelligent, is quite literally the worst player of hide-and-seek I’ve ever met. I went inside and looked out the living room window as Lucy counted to 20 and the other kids scattered, and I sat down and cried.

People around my age, especially those who are parents, have this obsession with collecting, preserving and publicly announcing perfect moments. Late Gen X-ers, Millennials or somewhere just in between, we were given the gift of being able to, via the Internet, broadcast the best versions of ourselves in our youth, and for many of us, it’s understood that the camera will pan out, the broadcast will widen to include our spouses and children as we age. Much has been written over the years about this now-common practice — maybe too much — so I’m not going to spend much time wringing my hands in this blog about whether or not posting pictures of my tacos on Facebook and Instagram makes my life somehow less authentic. What I will say is that, for my part, the way I process the passage of time as an adult seems to have been influenced largely by a personal and lifelong need to document, a need that I can’t really blame on social media, and one that ramped up significantly the moment my daughter was born.

What I can attribute to social media is the occasional tendency to measure the day in what I’m going to call “postable moments” — that is, rating the day based on whether something good enough to post on Instagram or Facebook has occurred. Was it funny? Was it moving? Was it adorable? Did I post it?

It sounds as off-putting now that I’m typing as it did when it occurred to me at around 3 a.m. the other day. I was listening out for Lucy, in case she called from her bedroom. I was lying on the couch, the same couch where I had cried earlier because Lucy had so effortlessly made new friends. Now that had been a perfect, postable moment: the sight of Lucy and and the neighborhood kids playing on and around our small porch, drinking the Hawaiian Punch I’d served them each from a pitcher, wishing I’d been wearing an apron or something so I could really get into the “neighborhood mom” vibe. Yes, it was a wonderful afternoon — until Lucy came in from playing, sat down on the linoleum in front of the aquarium and puked in her hands.

What occurred to me at 3 a.m. was that every postable moment is, naturally, preceded and followed by other moments; that moments, in fact, don’t exist. Or rather, they don’t exist until later. A moment is a film reel constructed in the mind to spin at will. A moment is a ghost, a telescope, a glance from the corner of the eye.

I’m not going to beat myself up for wanting to share the best parts of my day with folks and receive them in kind from others, and I’m not going to beat you up about it, either. Surely assuming anything that you’ve got to say is important to someone else is an incredible act of ego, even if that assumption is true, and that can be applied to everybody. But in our quieter hours, perhaps pre-dawn and waiting for sounds from the next room, the things we don’t share rise and announce themselves. For example, holding your child’s hair back while she repeatedly barfs into one of the mixing bowls your mom gave you, one you grew up watching her use, and which you’ll probably never use again. Wishing she felt better so you could put her to bed in her own room as you normally do and enjoy the little bit of child-free time you normally have in the evenings. The guilt you feel for having the preceding thought when your daughter raises her head from your mother’s mixing bowl and doesn’t cry, but just looks at you and says, “This feels terrible.”

I want to forget these things, but they’ll come back to me. When they do, they won’t necessarily be any more true or false than the parts of my life I typically choose to share with others. They will, though, perhaps tell me more about myself than the snapshots on my phone. Or rather, they will remind me that I’m not always High Street Mom, resplendent on the porch with a pitcher of sugar water and a smile — if I ever was. They will remind me that, sometimes, I’m tired and annoyed and dumping a bowl of vomit down the toilet — and that you are, too.