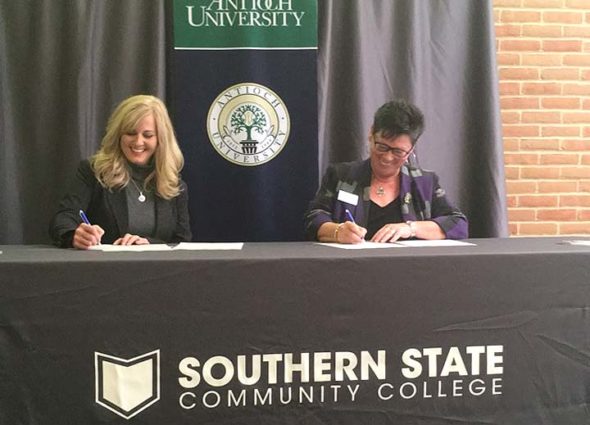 New pathways for a B.A. at Antioch University Midwest

Three plus one equals four, of course. But Antioch University Midwest’s new “3-plus-1” programs are aiming at something more — a four-year degree option that gives more students access to college, while lowering overall college costs.

Increasingly popular in Ohio and elsewhere, “3-plus-1” programs allow students enrolled full time to complete three years at a community college and one year at a university to earn their bachelor’s degree. By contrast, students transferring from an associate to a bachelor’s program typically take two years of courses at each -institution.

AUM has announced two “3-plus-1” partnerships in recent months, with Clark State Community College in Springfield and Southern State Community College in Hillsboro, Ohio. The Clark State program began last fall, while the Southern State program went into effect at the beginning of the spring 2017 semester. Both programs offer “3-plus-1” options in areas of study such as agriculture, criminal justice, information technology and social services.

University leaders expect to finalize a third partnership this year, with Sinclair Community College in Dayton. AUM currently collaborates with Sinclair to offer another type of associate-to-bachelor’s degree program at the community college’s Mason campus.

The new partnerships are unique in the region, according to AUM Provost Marian Glancy in an interview last month.

The programs will save students about $11,600 in college costs. And they create “seamless pathways” from the associate to bachelor’s level, with support from faculty and advisors at each institution, according to Glancy. These factors mean that students are more likely to finish their bachelor’s degree, she said.

“Research shows that cost is an issue for non-completion,” she explained. “And if community college students know the pathway [to a bachelor’s degree] is there, their chances of actually completing the degree are enhanced dramatically.”

AUM already has transfer agreements with all three partners, allowing students to transfer associate degree credits into its bachelor’s degree completion program. The “3-plus-1” option expands on those partnerships to put bachelor’s degrees within reach of more students.

“We see what we’re doing with this program as part of our mission of social justice,” Glancy said.

Fultz worked extensively with the faculty at each of the partner institutions to structure unique “pathways” of study that bridge associate and bachelor’s coursework. For example, a pathway was created from the criminal justice major at Clark State and Southern State to a conflict studies concentration at AUM. The conflict studies component of the pathway adds courses in interpersonal and intercultural conflict that deepen a student’s understanding of justice and the law, according to Fultz.

“For someone who might be entering the police force, they’ll have a wider range of understandings to draw on,” she said.

In some cases, the need to create a pathway at the bachelor’s level spurred the development or revival of programs at AUM, Fultz added. Specifically, three new areas of concentration have been added to the university’s liberal studies major: environmental sustainability, conflict studies (previously a master’s program only) and information technology. All of these map to technical degrees at partner institutions.

Students enrolled in the “3-plus-1” program take 90 credits from their community college, or three years of full-time coursework. They take 30 credits, or the equivalent of one year, at AUM, though these credits are spread out over two years. Students pay three years’ tuition to their community college, and one year of tuition to AUM, which accounts for the overall cost savings.

AUM classes are offered on weekday evenings and Saturdays at the university’s Yellow Springs campus. Online or hybrid options are being explored but are not currently part of the program, according to Fultz.

The AUM coursework includes an “interdisciplinary core” of seven classes covering topics such as ecology, leadership, literary analysis, the history of civilization and students’ own modes and methods of learning. Students also take three courses in their major at AUM, including a senior project. The curriculum remains rigorous, with an emphasis on writing and critical thinking skills, Glancy said.

“It’s not about watering down the curriculum,” she said. When students graduate, “they’re receiving an Antiochian degree.”

A boost to enrollment?

A total of about 10 students are currently enrolled under the new partnerships, including two from Southern State in the current semester. Those numbers are small, but university leaders expect enrollment to grow.

“We expect enrollment numbers to spike as more students find out about the program,” Fultz said.

Boosting enrollment is one purpose of the partnerships, according to Glancy. “It gives us a wider pool,” she said. Rather than working to recruit students who have already completed associate degrees, the “3-plus-1” option allows AUM to reach students at an earlier stage, when they’re just committing to a pathway of study.

Though AUM actually receives less tuition — one year rather than two — from individual students enrolled through the new partnerships, university leaders expect enrollment increases to bring in more revenue overall. And about one-third of students who complete their bachelor’s at AUM go on to enroll in one of its master’s programs, a pattern Glancy expects will hold for “3-plus-1” students.

AUM currently enrolls between 200 and 250 students at the bachelor’s level, according to Glancy. Total enrollment, including in the university’s five graduate programs, is just under 500, university spokesperson Michael Metcalf said in a recent email.

Those figures are down from enrollment highs of around 700 in the early 2000s. Enrollment was one issue cited by Antioch University leaders last July, when the entire university system was restructured to eliminate campus boards and all five campus presidents. Leaders also discussed at that time a possible sale of the AUM building, located on the western edge of Yellow Springs, though Glancy said in an email this week that no further updates were available on the status of the AUM campus.

The new partnerships may change these calculations. Certainly, they could change the demographics of AUM’s student population, according to Glancy. Once catering to students in their 40s and 50s returning to school, AUM already has seen a drop in average age, to 33, due to larger demographic shifts affecting college attendance. And it could see a further lowering of average age with more younger students entering through the “3-plus-1” option, she said.

Regardless, the university aims to expand educational opportunities for students of all ages in a higher education environment that’s fluid, and changing fast, according to Fultz. “We have to keep up,” she said.

But some things don’t change, she added. The educational experience at AUM remains distinctively Antiochian, she said, encouraging students to combine ideas with action, academics with real-world experience.

“The ‘3-plus-1’ unites passion with purpose. Students move it forward as changemakers in the world,” Fultz said.