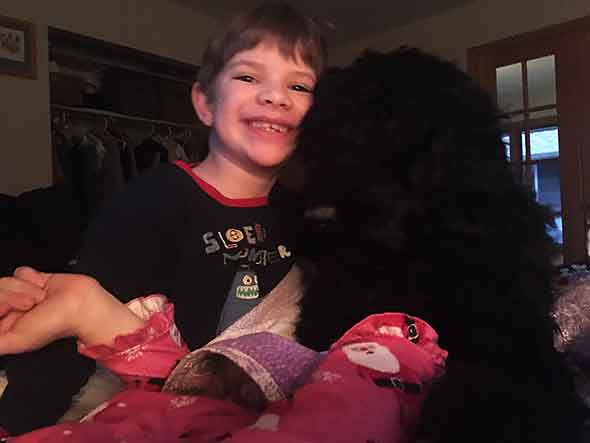 Riding the excitement of Chris Tebbetts’s recent homecoming to Yellow Springs, my family sat down to watch Middle School, the Worst Years of My Life. I expected to giggle with my children at the farcical film. We went on a stranger journey instead.

My son bonded with the lead characters Rafe and Leo. His heart broke when the two friends say goodbye at the end of the film. He found that he couldn’t let the ending go. “But why?” he asked wondering at the boys’ fate. I did my best to explain the arc of friendship and love. We talked about separation in other situations. For one, our dog Bellatrix will enter advanced training at 4 Paws for Ability soon and, after graduation, transition to her job as service dog. “Even when she leaves the family,” I said, “she’ll always be family.”

We talked about family that we lost recently to illness. “Did you ever have a friend who died from cancer?” he asked. “Yes,” I answered, “a girl who lived next door.” I recalled singing the young woman’s favorite hymn The Old Rugged Cross at her funeral.

My daughter interjected, “She was your best friend, right?” recalling a past conversation about a middle school buddy. “No,” I explained, “Brenda died from a traffic accident.” My son asked what happened. I told him that Brenda was on her bike when she was hit by a truck. She was struck crossing a busy road after school on her way to the post office. “Now people know to let the buses go first before releasing walkers after school.”

This reveal unleashed a torrent of questions from my son. He needed to know details but was horrified by tragic events involving the loud rubbling school busses and highway big rigs he loves. I held my young man close as he took in the details and sought still more: “But why did she go to the post office? Were her parents very sad? Did she go to the hospital?” He had calmed down from his first wave of grief over fictional characters, but now he felt the impact of my pain. He shook again with heartache and yet the questions kept coming. “Did you..? Was she…? Did they…? But why…? But why?”

The why questions were hard to answer. Why couldn’t the doctors save her? Why did Brenda miss the danger right before her?

I can answer tough questions. “Why is the sky blue?”

“Well, child, the atmosphere acts like a lens bending purple and blue light more than red and green toward our eyes. Then, along the path to our eyes, the atmosphere absorbs more purple than blue.”

I can explain certain mysteries but my child doesn’t want those answers just now. He wants to know if Mom understands why the sky is blue. He’s reassured by knowing his parents’ capacity to frame the world.

He asked to see Brenda’s picture. I pulled my senior yearbook from the bookshelf and showed him her in memoriam page. I read the poem of dedication to a girl of kindness and grace. With the intent of leaving the scene of her death and turning to scenes of her life, I told my son about how every day Brenda and I would walk hand in hand from the middle school to high school orchestra room. We walked that path of promise many times. In the orchestra room, we would practice our instruments…two troubadour harps we affectionately named Betty and Veronica.

My son drew a breath and wished he could meet Brenda. Then he asked, “Mom, what is heaven?”

I wasn’t at a complete loss for words. I recognized this moment: my son sensed the veil, the sudden gaping border of mortality. Improvising a riff on faith and physics, I admitted we’re not sure. Casting about, I arrived at an answer.

“It is the well of all our souls…the source and home of consciousness.”

He seem satisfied with that framing. It gave me comfort too imagining a place where the spirits of my childhood friend and my child could commune.

We called Bellatrix up on his bed to snuggle. The three of us pulled tight and fell asleep together. That night, my son stirred several times breathing in sobs still shaky with heartache. I tucked my son under my chin and trembled at his capacity to empathize.