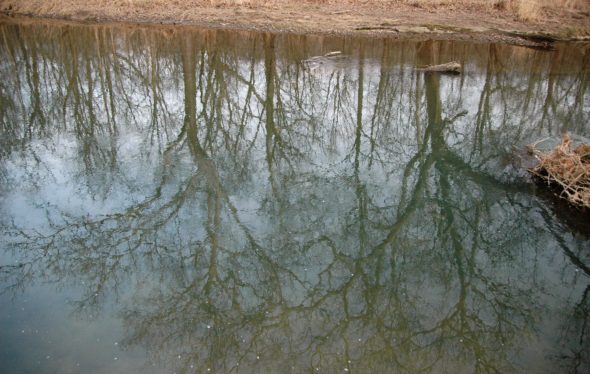 Upside down in the South Glen, February 2017. (Photo by Audrey Hackett)

BLOG— World of upside down

When I was a kid, I played a game I called Upside Down. My mother had a makeup mirror that I could hold in my hands and tip up to show the ceiling. With the ceiling in view, I stepped carefully, a little lurchingly, around the house, looking only at the ceiling, never the floor. The sensation was thrilling. I was really — almost — walking upside down.

And I slyly play a similar version of the game as an adult. On rainy days, my gaze is pulled to the silver puddles. The trees and sky are there, and look — I’m there, too, walking upside down. I’m eight again, feeling the same imaginative frisson.

Step this way to the house of mirrors! The (un)funhouse! Where distortion and illusion leer at every turn — wearying and confusing us, perhaps finally breaking us down.

Trump’s mind is a sick mind. It is sick in a particular way. There is no inner world. Step into a hall of mirrors and you see … mirrors, each purporting to lead you deeper, none taking you there. Many observers have noted that Trump lives for attention. I would put it differently: he lives attention. That is where, and that is only where, he resides. He looks out on the vast and multifarious nation, the nation of Whitmanian celebration, and he sees himself, infinitely reflected. Yet still he doesn’t quite feel real — how could he? — and so he turns back to his Republic-as-mirror, scanning, scanning the millions of shiny self-simulations …

Better to say his soul is sick. Alchemy might cure him. Eye of newt, mud dug from the riverbank under the new moon. Exorcism.

As wild as his whoppers are, Trump’s leading characteristic is a lack of imagination. This is what makes him singularly dangerous. He lacks an imaginative grasp of other people’s realities. He lacks it because he’s cut off from his own. He sees himself from the outside in — an incorrigible literalist, despite the lies — rather than imagining himself from the inside out. Journalists and ghostwriters who have spent time with him report that, even when pushed, he can’t come up with a shred, a shard, of introspection. In place of reflection, he has … reflection. The house of mirrors again.

Paradoxically, imagination grounds us in the world. It takes us out of the world, and out of ourselves, only to locate us more deeply there, with greater awareness and greater capacity for awareness. It is a hallmark of the human, yet it must be nourished, cultivated. Imagination is our birthright, but it’s up to us to take the thing that lives inside us and make it real.

And so one cure for Trump — if not for Trump himself, than for those of us trapped in his mirror — is to turn away from the funhouse and coax imagination from its hole. It may be a shy creature, unused to the light. We might have to go a little ways into the dark to find it. A walk, a poem, a painting, a song, a conversation, a silence. Imagination is there. Anywhere we are, it’s there, or could be. As near as the world inside us, as surprising as the world that’s upside down in the child’s mirror.

Upside down and inside out, this world — contra Trump — is luminous, mysterious, real.