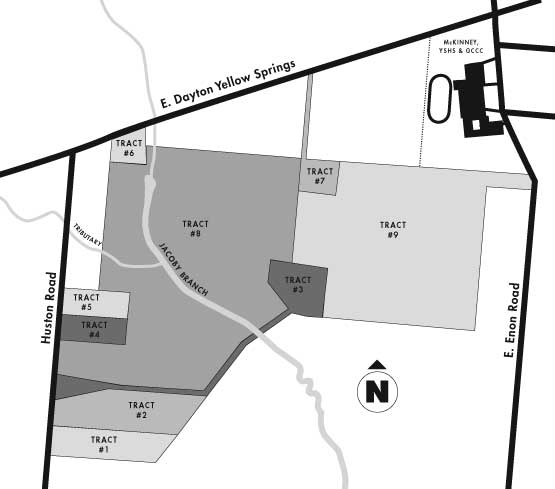 On Thursday, March 16, a 267-acre farm close to the western edge of Yellow Springs will go up for sale at auction. At Village Council’s March 6 meeting, Council members made clear their intent to help preserve the farm being sold by the Arnovitz family, or at least the part that includes tributaries of Jacoby Creek, which is part of the Jacoby greenbelt.

“Protecting the Jacoby greenbelt has been a value of the community as long as I’ve been here or longer,” Council President Karen Wintrow said at the meeting.

Council unanimously approved a resolution that commits up to $200,000 of Village greenspace funds toward establishing a conservation easement on the land, in conjunction with Tecumseh Land Trust. The current balance of the fund is $198,950.

Council also unanimously approved a second resolution that refuses to annex or extend utilities to any property west of the village’s current boundaries.

“This is to cement that we are not interested in extending our boundaries in that direction beyond what they are now,” Wintrow said.

While the resolution commiting greenspace funds to the farm conservation “at this point feels like the best thing we can do to protect the property,” according to Wintow, Council also reserved the option of holding a special meeting on Monday, March 13, at 5:30 p.m. if it decides to take additional steps. Wintrow did not comment on what those steps might be. The special meeting would initially be an executive session for the purpose of discussing real estate, followed by a possible vote on legislation.

Since the pending sale of the farm was announced several weeks ago, “there’s been a lot of action, a lot of talking,” TLT Executive Director Krista Magaw said to Council. The nonprofit has been busy talking to people interested in the property and looking into funding sources.

“We’re trying to put together as big a pot of money as possible to purchase an easement,” Magaw said, estimating that the group aims to raise about $500,000 to cover the cost of an easement.

The farm is divided into nine smaller parcels, with several small parcels, some with houses, fronting Huston Road. While none of the farm fronts on Dayton-Yellow Springs Road, it lies directly behind land that does, as well as behind and south of Yellow Springs High School. The 125-acre Tract 8 is considered the most desirable to TLT, since it contains two tributaries of Jacoby Creek, plus woodlands around the creek, and is part of the long-envisioned Jacoby greenbelt. Just east of that parcel is Tract 9, a slightly smaller area that is considered by the seller as the most attractive parcel for potential development.

While protecting farmland from development is the main priority of TLT, the group is also keenly interested in the Arnovitz property because of water quality issues, Magaw said in an interview this week. The conservation easement the group would seek for the creek area is more stringent than most easements, allowing for buffer strips along the creek that protect it from farm runoff. While the Jacoby Creek would mainly affect water quality for the City of Xenia, it could also affect Yellow Springs drinking water in the event of extreme rain, which is happening more frequently.

“This is an especially compelling case for preserving the stream,” she said.

The land has been owned by the Arnovitz family for about 50 years.

In an interview on Tuesday, Matt Arnovitz, a commercial developer whose family is selling the land, said he has heard “tremendous interest” in the property, with “a slew of people touring the property from all walks of life,” including those interested in farming and in developing the property. Auctioneer Ron Denney of Ohio Real Estate Auctions, who will auction the property, said on Tuesday he has heard interest in the farm that “is typical to what we’d expect,” although he declined to be more specific.

The auction will take place on Thursday, March 16, at 6 p.m. at the Hilton Garden Inn at 3520 Pentagon Avenue, Beavercreek.

Similar to the 1999 Whitehall Farm auction, the auctioneer will initially take bids for individual parcels, then take bids for the farm as a whole.

“We just don’t know the level of interest in the individual pieces of land,” Magaw said to Council, so it’s not known whether the land will be sold in pieces or as a whole.

In a previous interview Magaw estimated the purchase price as between $1 million and $2 million. Area farmland sells for about $4,500 to $9,000 an acre, although the price would be higher if it’s to be developed, according to Arnovitz.

Village leaders have envisioned a “greenbelt” around Yellow Springs to protect the village from encroaching development since the late 1960s, according to Magaw, and that goal has been re-affirmed in every Village planning process since then. While about three quarters of that greenbelt has been placed under conservation easement, there are still large chunks left unprotected, including sections of the Arnovitz farm.