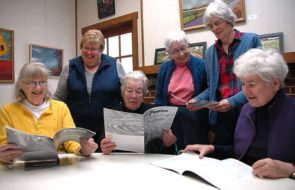 Members of the Senior Center committee putting together ”Ripples,” the center’s annual literary journal by and about seniors, are seeking submissions from villagers. Shown above looking at past issues are, from left, Suzanne Patterson, Karen Wolford, Jane Baker, Fran LaSalle, Marianne Whelchel and Lee Huntington. Not pictured is committee member Sandy Love. (Photo by Diane Chiddister)

The above limerick, part of the poem, “Local Levity,” was one of the 27 poems, stories and essays in last year’s “Ripples,” the annual literary journal of essays, stories and poems by or about local elders sponsored by the Yellow Springs Senior Center.

While some of the submissions are light and humorous, such as Champie’s, others are serious, such as Janeal Ravndal’s “11/14/15 Peace Vigil, Yellow Springs, Ohio,” with the last stanza:

With signs, nine elders bundled for the cold take on the world
in their own way, stand up for peace
as best they can
in one small town, on one cold day.

Along with poems, the 2016 journal also includes remembrances of Hugh Taylor Birch, Iko Wright, longtime Police Chief Jim McKee and Shirley Wexler, contributed by Lucia Livingston, Harold Wright, Joyce McCurdy and Mary White, respectively. There’s also an essay by Joan Horn on the joy of collecting “curbside treasures” and one by Ravndal on the challenge of taking up an exercise routine. There are poems by Martie Jensen, Sandra Love, John Blakelock, Pat Stempfly and Ross Morgan, among others.

This diversity of both form and content is the goal of “Ripples,” according to the organizers of this year’s journal. Yet all the submissions do have a common theme.

“It’s a celebration of elders,” said Lee Huntington, one of the group putting together the journal.

The group is getting ready to shepherd this year’s issue into production. The submission deadline is March 17,  and organizers encourage all villagers, or those with a connection to Yellow Springs, young and old alike, to make a submission.

“We want people to know you don’t have to be older to be in the journal,” Huntington said. “The submission just has to be about an older person, or about aging or aging in Yellow Springs.”

This is the fourth year that the Senior Center is publishing “Ripples,” after several years when the center sponsored an annual talent show featuring elders. But that event proved complicated to organize, and Patterson felt inspired by several local organizations, such as Community Solutions and the Antioch School, that had put together a journal of writing from local authors.

“That’s how it got started,” Patterson said.

In the four years of publication, the “Ripples” organizers have received 124 submissions and published 72 of them. Mainly, those turned away were multiple entries by a single writer, or submissions that didn’t meet the guidelines.

Those guidelines aren’t difficult, though. Submissions must be previously unpublished, with a word limit of 750 words for essays and memoirs and 1,600 words for fiction. A poem should be no longer than one page.

Organizers acknowledge that some who aren’t used to writing might find the process a bit intimidating.

“If you write something and publish it, it’s out there forever,” LaSalle said. “There’s a tinge of, ‘oh dear.’”

But that permanent record is one of writing’s benefits, especially for older people writing their memories or sharing experiences that might otherwise be lost, organizers said. And the writing process can also be a powerful tool for remembering.

“When you write, your memories expand, you remember more,” Huntington said.

Whatever the topic, “Ripples” organizers hope that many villagers participate in this year’s journal. Those who submit may also include a photo related to an article or memoir. Contributors are also asked to include a couple of sentences about themselves. While there is no payment, contributors will receive a free copy of the journal.

Entries should be postmarked/emailed by Friday, March 17, and contributors will be notified by April 20. For this purpose, submissions should be accompanied by an email address or stamped, self-addressed envelope.

For more information or to get a submission form, contact 767-5751 or go online to ysseniorcenterripples@gmail.com.