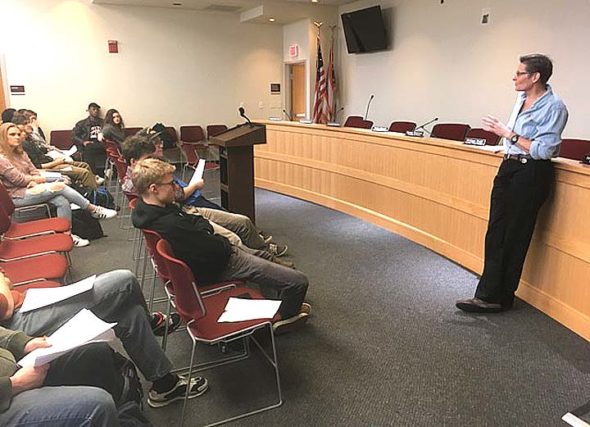 At the beginning of this year, Yellow Springs High School teacher Kevin Lydy was steering his government class to a hands-on focus on state government. As part of meeting Ohio state standards to engage high school students with government, Lydy planned to have students identify current bills in front of the Ohio General Assembly, then write letters in response to the bills.
“Then New Year’s Eve happened,” Lydy said recently in his classroom at the high school. “I couldn’t ignore it. It became a teachable moment.”

What grabbed Lydy’s, and students’ attention was the controversial New Year’s Eve Ball Drop, after which, in an attempt to disperse the crowd, police treated citizens in a way many villagers found hostile and aggressive.

Many of Lydy’s students were at the event.

“It was not something I thought would happen in Yellow Springs,” said Allison Bothwell, who was there.

So Lydy, who previously taught at the Dayton Regional STEM school, quickly changed gears. He created a new project-based learning, or PBL, project that asked students to engage with Village and local police leaders around the New Year’s Eve incident. Specifically, students were to research the issues and then make proposals that aimed to keep such an incident from happening again.

As a history and government teacher, such immersion in a real-world issue helps address his students’ most frequent complaint about his subject matter.

“The biggest complaint kids have with history is, ‘What does it have to do with us today?’” he said. The local policing topic also intersects with the national conversation on police/community relationship.

“They’re going to talk about it anyway,” Lydy said of the local incident. “This way they get more interested.”

So Lydy’s class broke up into small groups to research the topic and answer the question of how best to improve the relationship between police and the community. After several weeks each group zeroed in on a proposal, then wrote up the proposal to present to Village Council. Most of the proposals were presented at Council’s Feb. 13 meeting, which was intended as a report on the independent investigation into the incident.

The student proposals included suggestions for a day-long “jamboree,” to take place March 11, to bring together police and villagers for a lighthearted day of fun; an ongoing series of meetings involving both police and community members to identify and discuss current problems; a basketball tournament between police officers and young people, in order to improve their relationships; a survey of students’ attitudes toward the police, to be shared with Village Council and the police; a reduction in the number of officers in the police department; and a video made of interviews with longtime villagers who discuss community policing in the past, to be shown to the police department.

The students’ proposals have been forwarded to the Justice System Task Force for consideration, Council President Karen Wintrow said recently. She praised Lydy and the young people for their work and their interest.

Several weeks ago, the students were in the midst of researching and fine-tuning their proposals in small groups when this reporter visited the classroom. Also present was First Baptist Church Pastor Bill Randolph, who has been involved in the issue. The students also received visits from John Gudgel and Janet Mueller of The 365 Project, Pat Dewees of the Justice System Task Force and Brian Housh of Village Council, all of whom are involved in the issue of police/community relations.

“I wanted students to start conversations with people who are on the front lines of this issue,” Lydy said.

The students also visited the Bryan Center, where they met with Interim Chief Brian Carlson and Clerk of Council Judy Kintner, who discussed how Council works.

In one group, the students aimed to organize an event to bring police officers and villagers together in a light-hearted way.

“Our hope is to create a pressure-free zone,” said Raine Glavin. “There’s always a level of tension when villagers interact with police, and we wanted to create a space where they could have a conversation.”

The group was inspired by research into similar “bonding” events organized by the San Francisco and Los Angeles police departments. The local event will take place from 3 to 5 p.m. on Saturday, March 11, at the high school.

Group members understand that a one-time event won’t solve complex issues of mistrust, but they believe it could begin to solve those problems.

“Having this event won’t solve all the problems, but it’s a step in the right direction,” Glavin said.

A second group also aims to enhance communication between villagers and police, but their proposal suggests an ongoing series of meetings between the two parties to discuss the issue.
“People coming together will create more friendliness, help villagers know the police officers as people,” said Mia Billiet.

Such gatherings can help create the familiarity that was once a natural byproduct of police living in Yellow Springs, according to Keegan Chlanda.

“Until recently, police lived in the community,” he said.

The students also plan to have participants fill out surveys to determine if the gatherings led to changes in their perceptions.

And a third group aimed for more structural changes in the police department, having researched municipal spending on police in communities similar in size to Yellow Springs. In Yellow Springs, more than 50 percent of the general fund budget goes to the police department, according to group members Kadie Lafferty, Felix Breza and Ty Arnold, a percentage that their research indicates is more than for many comparable communities.

“We think the police are overfunded and overstaffed,” Arnold said.

Several weeks later, the students had refined their proposals and written them up to present to Council.

The young people’s contribution to the community conversation is valuable, according to Wintrow.

“It’s important to capture the energy and interest of young people and connect with them as we move forward with the police department,” she said.