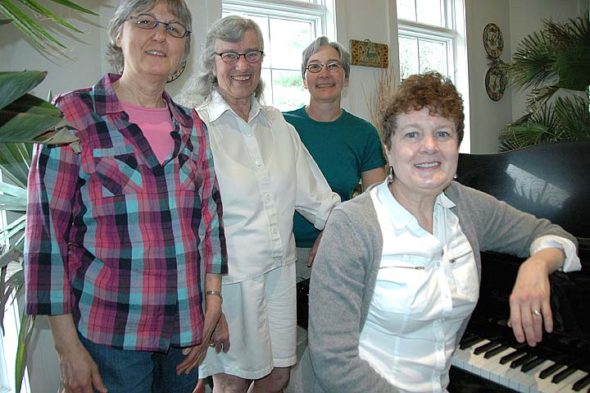 The board of the Yellow Springs Youth Orchestra Association is launching a new membership drive. Shown above are board members, from left, Carolyn Ray, Shirley Mullins, Liz Blakelock and Cammy Dell Grote at the piano. Not shown are Jeff Huntington, Scott Kellogg and Dennis Farmer. (Photo by Diane Chiddister)

For many decades, Yellow Springs has been known as a mecca of music, a tiny village in which an outsize percentage of young people grow up to be professional musicians or music teachers. Composers Allen McCullough and Drew Heminger grew up here, as did world-class performers Wendy Champney and Polly Case, just to name a few. It’s a town in which not only children but people of all ages both perform and appreciate music, and much credit for this rich musical environment goes to the Yellow Springs Youth Orchestra Association, or YSYOA.

However, in recent years a variety of factors contributed to a waning of YSYOA vitality, including many activities competing with music for young people’s attention. But after a period of relative inactivity, the group’s leaders are launching a new membership drive and looking to re-invigorate the local music scene.

Letters for a new YSYOA membership drive are going out this week, and the group’s leaders want to make clear what villagers’ donations will provide.

• support for Yellow Springs Strings, a chamber orchestra for adults, many of whom are returning to music after many years

• the purchase and refurbishing of instruments

• bus trips to concerts in Dayton and Springfield

• the purchase of sheet music

The group hopes these activities reach a broad range of villagers, both young and old.

“We have an appreciation for what an important part of life music can be,” said board member Carolyn Ray.

The group began in 1965, largely launched by the considerable passion and energy of Shirley Mullins, then a young cellist and music teacher who had recently moved to town. Dismayed that local schools lacked an orchestra program, Mullins set out to build one. Impressed by the playing of violinist Mary Schumacher in the Antioch College orchestra, Mullins approached Schumacher to partner in her endeavor.

“She said, I’ve never taught before,” Mullins said recently with a laugh, but Schumacher was game anyway. So the two women, with no money and no support from anyone else, put an ad in the Yellow Springs News announcing their new orchestra program.

“That summer 25 kids showed up,” she said, including pretty much all the German kids in town.

And over the next decades, those numbers mushroomed. In the 70s, 80s and 90s, the music program was especially robust, attracting as many as 100 children to its orchestra. During these years, the schools funded their own music programs, hiring Mullins to conduct the orchestra.

“I grew up thinking this was a normal program,” said Cammy Grote, a music teacher who studied piano, viola and trombone as a child through the schools and YSYOA. But after she left Yellow Springs, Grote realized how unusual it was to have such a vital music environment in a small village.

The program’s vitality had to do with its level of activity, Grote said, and Mullins believed in always having a goal for her students to work toward. So they were constantly taking bus trips (Mullins drove the bus) to see concerts, or to give concerts, or they were making records.

“It was a really vibrant program,” Grote said. “Orchestra or band was the place to be.”

Liz Blakelock also remembers those heady days of Yellow Springs music, when the orchestra became an important new home after she moved to town at age 12.

“I was an outsider and this was a place I could belong, could be valued,” she said.

But times do change, and those changes affected the program. More activities, such as school athletics for girls and local kids’ theater, competed for the kids’ attention, and scheduling orchestra into the school day was sometimes a challenge. So the orchestra numbers have dropped, although the school continues to offer the program.

Because YSYOA is no longer the only place in town for kids to study music, the group is expanding its focus to the community as a whole. It actually began as a whole-village effort, according to Mullins, and is now returning to that focus.

“The focus will be back on the community again,” Grote said.

That focus includes the Tuesday night Yellow Springs Strings program, a program for adults taught by Mullins. Organizers also hope to increase the number of opportunities for local adults and children to play music together, a project clearly dear to Mullins’ heart.

“We could bring 200 people together to play,” she said recently. “Imagine that!”

Membership in the YSYOA costs $25 per individual, $40 per family. Tax-deductible donations are also welcome. Memberships and donations can be mailed to YSYOA at P.O. Box 4 in Yellow Springs.