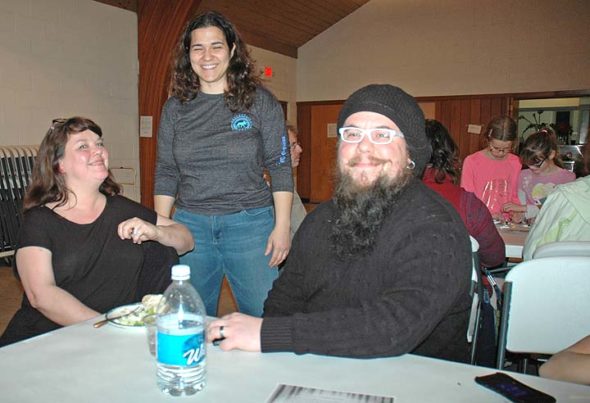 The Beloved Community Project seeks to address issues of poverty, hunger, racism, discrimination, inclusion, justice and peace within Yellow Springs. The next community event is planned Wednesday, April 19, beginning at 6 p.m. with a free meal, at the Presbyterian Church. Pictured at a recent gathering are Miriam Eckenrode Saari, Sommer McGuire and Beloved Community organizer the Rev. Aaron Saari. (Photo by Carol Simmons)

Love is creative and redemptive. Love builds up and unites; hate tears down and destroys. The aftermath of the ‘fight with fire’ method … is bitterness and chaos, the aftermath of the love method is reconciliation and creation of the beloved community.

The Rev. Martin Luther King Jr. spoke frequently throughout his life about working to create “The Beloved Community” — so much so that the concept, first attributed to early 20th-century philosopher-theologian Josiah Royce, has become largely associated with King and his vision of social justice.

According to the King Center in Atlanta, founded by his widow and Antioch College alumna Coretta Scott King, “Dr. King’s Beloved Community is a global vision (where) poverty, hunger and homelessness will not be tolerated. … Racism and all forms of discrimination, bigotry and prejudice will be replaced by an all-inclusive spirit of sisterhood and brotherhood. … (I)nternational disputes will be resolved by peaceful conflict-resolution and reconciliation. … Love and trust will triumph over fear and hatred. Peace with justice will prevail over war and military conflict.”

That global vision has local resonance for a group of Yellow Springs residents who have launched The Beloved Community Project to address issues of poverty, hunger, racism, discrimination, inclusion, justice and peace within the village, particularly through educational and community activities that foster connections, trust and love.

Inclusion for all is paramount in the project, said the Rev. Aaron Saari, pastor of First Presbyterian Church, and point person for the effort. The church is home base for the project, but Saari stressed that one does not need to be a practicing Presbyterian, or a Christian, or have any spiritual affiliation to take part.

The Beloved Community Project is not about religion, per se. There are some strong religious threads for Saari, however, who is a doctoral student at United Theological Seminary in Dayton, where he is a Martin Luther King Beloved Community Scholar, working with Beloved Community authority the Rev. Dr. Tony Hunt.

“I’ve spent the last year-and-a-half learning about the Beloved Community and thinking about the direction of the church,” Saari said. “Traditional church models don’t work anymore. Young people aren’t looking to join something that has already been determined. They’re looking for something where they can be an equal partner, where they can be respected.”

These were thoughts in his mind when he sat down with Anna Burke, a local artist and dreadlock technician, to get his own hair “locked” last year. After “about 25 hours in her chair,” the seed for the local Beloved Community Project had rooted and begun to grow, with Burke and her fiance, Ryan Stinson, a musician, playing  prominent roles.

Saari serves as spiritual director, Burke is artistic director and Stinson is musical director. Their designations make clear that art and music are a vital part of the project.

“We have so many incredible artists in this community,” Saari said. “We want to empower artists to express themselves spiritually.” Seeking out young artists and musicians is a powerful way of listening and valuing voices often ignored by traditional structures, he added.

Burke has a lot of passion for the possibilities at hand.

“I see the BCP not so much as an organization but an organism,” she has written in a statement of purpose. “I want to build a forward thinking, positive artistic community that welcomes the cutting edge yet has reverence for the masters of the past. If we listen, art will teach us.”

With Burke and Stinson, along with Christina Fox serving as business manager, the initial core group developed the idea of hosting regular “liturgia” events. The word is Greek and means “work of the people,” Saari said. Each liturgia would have a theme relevant to current concerns or conversations in the community. It may include panel discussions, expert lectures and social activism, but each one would have an art element. There have been three such events thus far, two that included a community meal.

The idea to bring food into the mix in the form of community meals came from Kate Anderson and Amanda Banaszak, Saari said. “It was the missing piece,” he said. “Feeding people on every level possible is our goal.”

The free meal offers space for community building and engagement while also addressing issues of food insecurity and need, he said. “We don’t have any prerequisites. Everyone is welcome.”

Through engagement with our neighbors, we learn about their lives, and their issues become personal to us, Saari noted. That’s also a strong building block for community activism, which is another component of the project.

Saari said that The Beloved Community Project seeks to address the question: “What if we create a centralized organization where activists can come to be fed spiritually, intellectually and physically?” And they can do that “where there is no hierarchy.”

The hierarchy of age is one the project is “making a concerted effort” to dismantle, Saari said. For the next event, scheduled Wednesday, April 19, 6-8 p.m., at the church, organizers plan to feature a panel of high school seniors and juniors talking about the role of youth in Yellow Springs culture. A free community meal also is planned.

The planning of events and activities is also open to all, he said. Anyone interested in being a part can learn more about meetings and activities from the group’s Facebook page, The Beloved Community Project of Yellow Springs; the project’s website at http://www.belovedys.org; and by contacting Saari, whose number is in the Redbook.

Some involved in the project are affiliated with the church, some not. “There are people stepping into the church for the first time in decades,” he said. “My hope is that we will have people of all spiritual backgrounds. … This is an organization of equals.”

Future plans include a possible music festival this summer. The Rev. Dr. Tony Hunt, of United Theological Seminary, will be the featured speaker at a liturgia May 17, 6–8 p.m., at the Presbyterian church. A free community meal will again be offered.

Saari said he recognizes that the project has a lot of moving pieces that can seem hard to wrangle. “I kind of feel we are the Jackson Pollock of nonprofits,” Saari said. “We’re throwing a bunch of stuff on the canvas,” and seeing the results. “It’s really up to the people who show up.”