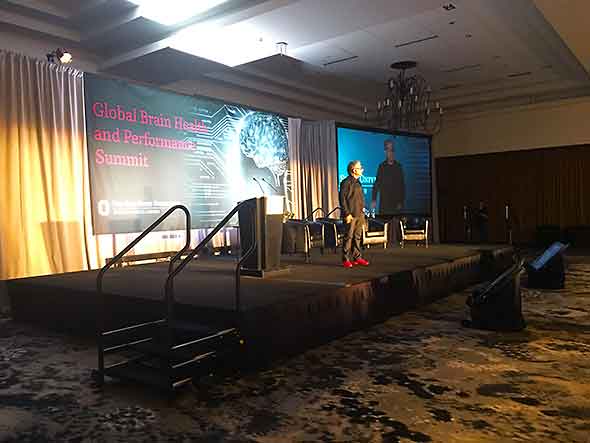 BLOG-I Am A Computer

Dr Deepak Chopra was in Columbus Ohio on Saturday to give a speech on two colliding ideas in science. Dr Chopra is a leader in brain health, and I attended his keynote at the Global Brain Health and Performance Summit hosted by Ohio State University. Later, at the university, he gave a community talk You are the Universe where he considered the two hardest problems in science today and whether they share a scientific harmony. The two questions?

Earlier in the day, I sat on the edge of my seat as the rock star of my chosen field began his keynote. I was in the front of the room so that I could attend the diverse talks on cognition better; my chosen seat wound up near the reserve tables of the summit’s hosts and lead sponsors. A buzz rose in those tables as the time for the keynote approached and in the room at large a palpable excitement as Dr Chopra was introduced to the crowd. I was taken aback as, in his address to the crowd, Dr Chopra asked how many people in the crowd…the neuroscientists, therapists, oncologists, and engineerings were involved in the study of consciousness. I was only one of a half dozen to raise my hand. I wondered at the interest in the topic but also the general distance that people maintain. It is indeed a difficult topic to approach.

Dr Chopra’s instinct is to draw the study of consciousness…the state of being, the maker of intent and essence…as the distinction between soul and cosmos. I readily see the power of his analogy of the physicist approaching the study of dark matter, the strange material whose mass controls much of the mechanics of the universe but whose nonluminous nature obscures its composition. We can only perceive dark matter through its work. We study such a thing by examining its computational nature.

The Universe is a computer. A widely distributed calculation across time and space and other dimensions that remain hidden to us. The computational might of the low-watt, hyperlinked particles in my head are as mysterious, intriguing, and illuminating. Seeing myself as a computation in no way diminishes my self, my inner soul. In fact, the notion raises my expectation for the resources we use to work through the labyrinth of life.