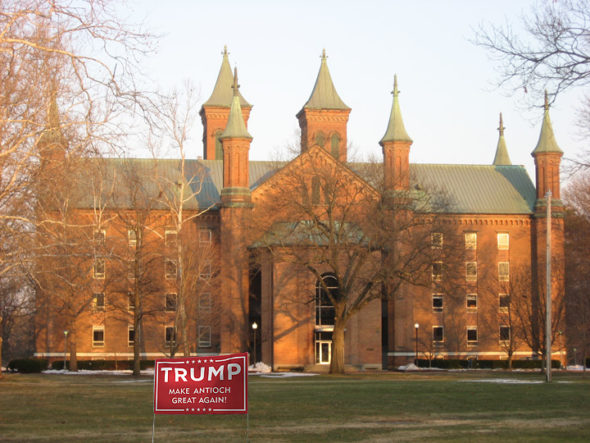 Antioch College students were called to action by changes in the current political climate. (Photo by F. Stop Fitzgerald)

Antioch College, the stalwart clarion of human, social and environmental rights, has been galvanized to action by the vast changes in the current political and cultural climate.

“That’s the only climate change I believe in,” said third-year student Andrei Zharov, who recently changed his name from Mike Stevens. “We, like, saw the writing on the wall; Antioch’s been going against the stream for so long, they’ve forgotten where the money is.” Zharov’s Global Seminar project on water includes studying the logistics of bottling and distributing glacial melt.

The college’s students and faculty have been “given a wake-up call,” says guidance counselor Wanda Wright-Turner. “Students had been spending inordinate amounts of time on preciously quixotic projects, like alternative energies, organic farming and social justice for the oppressed,” she said, indicating air quotes around the subjects. “They would fight against the current and never, ever, ever win. I saw many depressed young souls looking for an answer, a way.”

And then it came, in the form of the most ideologically focused administration ever to be elected into power, and which promised to pave the way for the “little guy,” meaning, of course, “big money.” And that’s when the students took notice.

“We were always told, ‘follow the money,’ Ramón Gutierrez, who now calls himself Robert Walterson, said. “So I did, and look where it led me.” Walterson, who is studying the philosophy of finance, spent his first co-op — Antioch College’s unique cooperative education program that allows students to work in the field of their study — in Geneva, Switzerland, at HSBC Private Bank. “I learned so much, but I’m not allowed to talk about it,” he said.

And the buck doesn’t just stop there. Sustainability major Claudi Waters is implementing her second-year chemistry skills to spruce up the Antioch garden farm. “By my estimates, our yield will quadruple,” she said, referring to the efficacy of a potent pesticide she’s developed in the science building’s new Monsanto Biolab for Profitable Farming. “That weedy patch? Feed the world? Are you kidding? No one likes weeding. Like, the only thing that really grew there was kale, and I HATE kale.” Ms. Waters is also the subject of a study which aims to show that her constant hand tremors are the result of the renewed sense of enthusiasm and purpose many students have expressed.

The college’s faculty have also been caught up in the spirit of the times. Hope Lesh, professor of environmental literature and poetry, mixed activism into her craft by examining the economic benefits of “greenwashing” in the war of words to win over hearts and minds. “Why rail against the people’s best interest with obtuse poems and obscure references, when we can actually be helping efficiencies of industry and scale become more widely accepted? Words are powerful things, which can make or break a bottom line,” she said.

The recent work at the college has not gone unnoticed in corner offices. College President Manley Mann noted that he has received several overtures from companies in agribusiness, the fossil fuels, and, interestingly, major law firms. 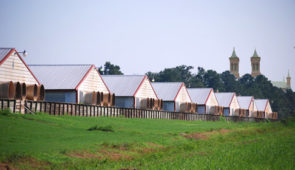 “Big business interests have noticed our activism. I have heard glowing reports of how hard and tirelessly our students work in the field, and how little it takes to stoke their ideological bonfires.” Mann says it’s too early to reveal details, but confirmed that two large food producers were competing for the naming rights to a planned 50,000-head poultry farm, to be built on the site of the former solar field. “We’ll have maximized the output of that land, and it’s financed, built and underwritten by someone else. Win, win.”

President Mann summed it up with his favorite quip. “Mann cannot live on hope alone,” he chuckled. “Sometimes the best defense is a good offense. And we’re definitely heading in the offensive direction. Let’s look deep within ourselves and answer to the calling, the imperative, and help make Antioch College great again.”