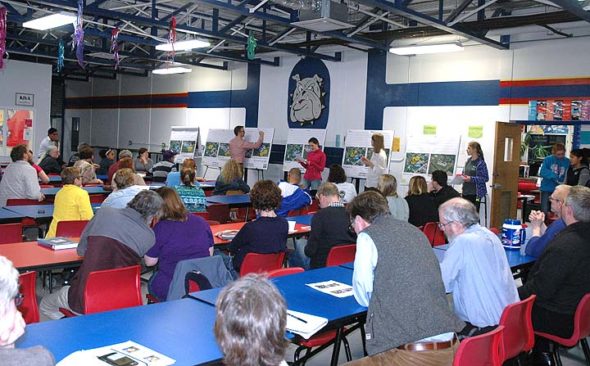 Approximately 65 villagers attended the first community engagement forum dedicated to discussing the question of new school district facilities. Because the buildings will be paid for with tax dollars, district superintendent Mario Basora said he wants to get as much village input about the project as possible. (Photo by Dylan Taylor-Lehman)

Approximately 65 villagers returned to high school earlier this week for the first community engagement forum dedicated to discussing the question of new district facilities. Attendees heard presentations from Yellow Springs District Superintendent Mario Basora regarding why the district is interested in constructing new buildings, and from Mike Ruetschle of Ruetschle Architects, the Dayton firm selected to do the preliminary research on the project, regarding the different building options the firm has developed. Because the buildings will be paid for by tax dollars, Basora said he wants to get as much village input as possible.

“The key is for the community to be involved in the decision-making process from the inception,” Basora said in an interview last week. “The community can provide insights and solutions that the school board and the architects may not have seen.”

The community can choose to renovate the current buildings, build entirely new buildings or opt to do nothing at all, Basora said. Construction options presented at the forum ranged in price from $16 million to $30 million. If residents are interested in renovation or construction, the project would be funded by taxpayers. Voters would vote on a levy to fund construction. The levy would be 6.6 to 12.7 mills, which equates to $230–$445 per year for every $100,000 of property value.

According to a schedule outlined at the forum, the district’s goal is to have a construction option selected by the fall of this year. If residents and then the school board choose to go forward with the project, it would be placed on the ballot in May 2018. Should the levy pass, designing the buildings would run from summer 2018 through summer 2019, with construction to be completed by winter break of 2021.

At the meeting, Basora began by outlining why the district wants to build new buildings. He cited two primary reasons in addition to the question of new facilities being an as-of-yet unaddressed part of the district’s 2020 plan: maintenance concerns with the current buildings and an educational methodology that has outgrown the current facilities.

The original part of Mills Lawn Elementary was built in 1952, he said, and the original part of Yellow Springs High School was built in 1963. The age of the buildings makes for significant maintenance issues that he said will compound with time. The projected cost to fix the Mills Lawn roof, for example, would cost an estimated $1 million to $2 million dollars, and this is only one of the repairs anticipated over the next few years, he said.

“It’s not a question of spending money or not, but what happens when we don’t,” Basora said.

He then discussed the many ways in which he feels the buildings are ill-equipped for the school’s project-based learning, or PBL, approach to education, which “required radically different ways of looking at schools and classrooms.” New schools suited to this approach would include more common areas conducive to group learning projects, a larger makerspace, classrooms with retractable dividers to allow for cross-disciplinary learning and conceivably a better kitchen that would allow the school to prepare and serve “higher quality” food. Additionally, new buildings would allow for the creation of spaces that could be used by both students and community members, such as a performance spaces and community kitchens, although these addtions would involve additional funding. Those costs would be added to the overall construction costs that would be paid for through the levy, Basora said, or by private contributions.

“We want a well-designed school that lasts the tests of time,” he said.

Architect Mike Ruetschle took the floor next and discussed possible funding from the Ohio Facilities Construction Commission. Should the district choose to partner with the state, the OFCC would fund up to 17 percent of the cost of the building, not including the cost of “locally funded initiatives,” or LFIs, which include the above-mentioned options such as the performance space or makerspace. The community would fund the project up front and would eventually be reimbursed by the state for the percentage it covers.

After Ruetschle spoke, the attendees broke into groups to discuss the pros and cons of the various options. Students from McKinney and YSHS facilitated the discussions and presented the findings of each group. A roundly unpopular option was the renovation of current buildings, an option that many residents deemed “unexciting” and would only be a temporary fix, according to attendees, given the nature of the buildings.

Another consideration presented at the meeting was the question of combining all district students in one K–12 building or maintaining two separate buildings for elementary and middle/high school students. While the logistics of bussing and parking for a combined building raised some concerns, as did the comingling of students of different age groups, a show of hands at the meeting indicated that the vast majority of forum attendees were interested in a combined K–12 building. A further show of hands indicated that most were in favor of keeping the school on the Mills Lawn campus in the middle of downtown, as opposed to a combined building where the high school currently sits on the outskirts of town.

“School could become an integral component of downtown culture,” said resident Gary Zaremsky. “And there would be no shortage of opportunities for older kids to get involved with mentoring programs.”

Villager Richard Lapedes raised questions about the location of the new buildings, as all of the options presented at the meeting are based on the extant Mills Lawn and YSHS site. He suggested looking into building the school on land available at Antioch College, which would still allow the school to be in town but would help ameliorate problems with parking and traffic. It would also allow the district to share certain facilities with the college, he said.

In response, school board member Steve Conn said that while he and the school administrators are amenable to suggestions of building the school at different locations, the district already owns around 43 acres of land, which eliminates the cost of purchasing new property. Basora added that he had spoken to Antioch University Midwest about its facilities, but it was a preliminary discussion and he has “nothing more to say on that at the moment.”

Going forward, Basora said last week that Ruetschle Architects and the school district will hold more community engagement forums to get further villager feedback. There will also be monthly meetings of the Facilities Advisory Committee, a group comprised of teachers and staff, local business owners, and parents and non-parents that will likewise advise the district on facilities options. While there is “no assumption that the district will have a levy in May 2018,” the forums serve to “get the best sense of what facilities would be appropriate,” Basora said.

“[Renovations or building new] is still too new of a concept to really know how the community feels,” he said. But each meeting “shows us what’s on and off the table and helps us whittle down to the best plan.”

The district is paying Ruetschle $10,000 for the initial round of community engagement. If there is sufficient community interest in building, the district would pay another $18,000 for building design, 3-D modeling, analysis of bus and transportation routes and further community engagement forums in preparation for the levy vote in May 2018.

Basora noted that it could ultimately turn out that the community decides not to undertake any renovations or new construction, but that is a decision the district will abide by if that’s what residents want.

“The will of the group will come out of the process,” he said.