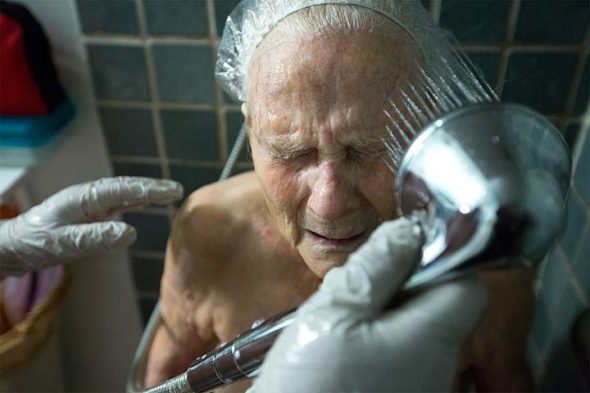 The Yellow Springs Senior Center and the Friends Care Community will present the documentary “Care” at the Little Art Theatre on Sunday, May 21, at 1 p.m. Edited by villager Jim Klein, the documentary follows the relationships between caregivers and their elderly patients, as well as the financial difficulties faced by patients and caregivers alike. (Submitted film still)

Yellow Springs has hosted some weighty documentaries recently, and “Care,” the film showing this weekend at the Little Art, is no exception. And like last month’s village premier of “The Modern Jungle,” which was co-directed by an Antioch professor, “Care” also has a Yellow Springs connection.

“Care” examines the close relationships between patient and caregivers in settings like New York City and rural Pennsylvania, but also how the situation can be financially untenable for everyone involved. The film draws its Yellow Springs connections from resident Jim Klein, who was one of the documentary’s principal editors, and producer Tony Heriza, who is an Antioch alum.

“Care” will show at the Little Art Theatre on Sunday, May 21, at 1 p.m. Admission is free. The documentary has been shown at festivals domestic and abroad, and its showing in Yellow Springs is part of a community screening campaign before its television premier on PBS on September 5. The Yellow Springs Senior Center and the Friends Care Community are presenting the documentary, and both organizations will be providing information about the services they offer. Heriza will be on hand to lead a discussion following the film.

According to Klein, the film started out as a look at caregivers specifically but expanded to take a critical look at aging in the US. Caregivers are often underpaid and undervalued, he said, but the cost of healthcare can likewise place huge financial strains on families. Additionally, many caregivers are immigrants and people of color, which creates unique social and cultural dynamics.

“That was the impetus for the film: portraying how difficult this work actually is,” Klein said.

For example, he said, one of the caregivers in New York City lost her rent-controlled apartment in Hurricane Sandy and was living in a homeless shelter while working as a caretaker. The film also examines an otherwise upper-middle class family that is in dire financial straits due to the cost of caring for a family member with Parkinson’s disease. The pressures of home healthcare can create a “three part mess,” affecting seniors, caregivers and family members. The release of the film is especially timely, Klein said, with Trump planning to cut Medicaid and social programs for senior care.

According to Heriza, the goal is to start a few conversations. One “around the kitchen table,” he said, with family members about caregiving plans in the future; another with neighborhood and faith communities about how to create better support systems for elderly; and the third about public policy surrounding home care.

“People have a tendency to think ‘this is something I should think about but I don’t want to right now,’” he said.

But the film is filled with a lot of warmth and humor, Klein said, as it shows what an indispensible role the caregivers play in the lives of their patients. The relationships between caregivers and the people they are taking care of are “very intense, very personal and great for a documentary,” he said.

Thinking about the issues surrounding homecare and aging is important because of the large “sandwich generation,” said Karen Wolford, director of the Senior Center. Baby-boomers in their sixties are taking care of their elderly parents but also their own kids. They have to accommodate the needs of their elders while at the same time planning for their own twilight years.

The Senior Center currently offers in-home caretaker services to around 60 area residents. “The intent is always to make sure people can stay in homes as long as they can,” she said. “Maintaining their dignity, comfort and place is important to them.”

Wolford said there are many misconceptions about the perceived lack of independence in senior citizens, as there are many seniors living contentedly on their own. However, as people age, they may need a little help to ensure their wellbeing.

While the Senior Center’s caregivers do not provide medical care or dispense medicine, they do provide a service that people may not realize is needed, Wolford said, such as cleaning and other household chores. One of the guiding principles for in-home care involves cleaning kitchens, bathrooms and beds, Wolford said.

Having a clean place to eat, sleep and use the bathroom are comforts that everyone should have, and those basic comforts can greatly improve someone’s quality of life, she said. Knowing a caretaker is helping out makes for a peace of mind, as they provide not only companionship but keep an eye out for loved ones by doing things such as minimizing tripping hazards and making sure elders don’t inadvertently eat spoiled food, she said, as the sense of taste can diminish with age.

“People don’t realize how much value a caregiver has,” Wolford said. “Not just to individuals but to their families as well.”

The filmmakers, all members of the “sandwich generation,” are confronting the issues raised in the film. Klein and director Deirdre Fishel had to hire caregivers for their own mothers, while producer Tony Heriza said his mother was able to live on her own until she was 99 thanks to the support of a home aide.

But they were also experiencing the up and downs of aging alongside the people whose stories are portrayed in the documentary. Documentaries are often filmed across a number of years, he said, during which filmmakers develop very close relationships with the people they’re filming.

The filmmakers understood this firsthand when one of the subjects died in the middle of filming. It was difficult to figure out if they should keep filming or not, Heriza said, but they were encouraged by family members to film the process of attending to the final preparations, in all of its difficulties.

Recognizing the importance of caregivers — and the reality that many people will not be able to afford it, and those that provide care may not live on the wages it pays — makes for a conversation the filmmakers feel is worthwhile and needed. Klein’s career has led to him to work on a number of Academy Award-nominated films, but “Care” is one of the things he’s most proud of.