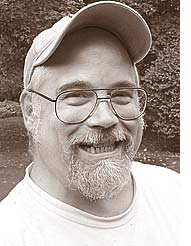 He was a talented writer, but unpublished, who chose to make his way in the world as a man-of-all trades where he was known as “Handy Andy.” At various times he was also a bartender and food service worker in which role he enjoyed personal interaction with customers and coworkers.

Bright, bold and inquisitive, Adam was an avid reader. So much so that, as a child, he sometimes read even when riding his bicycle, which sometimes led to strange looks from pedestrians in his path.

As an adult he favored science fiction and fantasy stories and lived a life with one foot in our world and the other in his own. He was devoted to animals and had a favorite parrot as his daily companion. Articulate and with the depth of knowledge that comes with broad reading, he loved to debate political issues with anyone who cared to participate and he contributed to many on-line blogs and forums.

Unmarried, he is survived, on his mother’s side, by his mother, Ann Mulford Luggen, and her husband, Michael Luggen, of Cincinnati; and his half-brother, Edmund Luggen, of Atlanta, Ga.

On his father’s side, he is survived by his father Ronald Schmidt and his wife, Phyllis Schmidt, of Yellow Springs; half-brother Eric Schmidt, of Santa Cruz, Calif.; and step-brother Stuart Rabkin, of Cincinnati.

Services will be held at a future date to be determined.