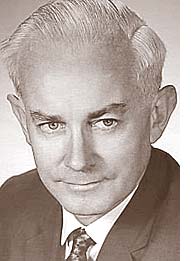 Alex Roche, of Yellow Springs, died on May 21, 2017 at Friends Care Community. He was 95 years of age, born in Healesville, Australia. Alex was the son of Frank and Myrtle Roche. He graduated from the University of Melbourne in 1946 and later obtained several post-graduate degrees from the same university: M.D., Ph.D. in anatomy and D.Sc. in child growth. He was a Fellow of the Royal Australasian College of Physicians.

After graduating in medicine, Alex completed a residency before joining the staff of the Anatomy Department at the University of Melbourne. He was a Fulbright Scholar at Western Reserve University in 1952 and on his return to Melbourne, he founded the University of Melbourne Child Growth Study. This study was very effective in data collection and data analysis and produced innovative publications. In 1968, he was asked to join the staff of The Fels Research Institute in Yellow Springs as the senior scientist and head of The Fels Longitudinal Study.

There were many changes in The Fels Longitudinal Study during the years that followed. An emphasis on the development of methods was introduced. The most important of these was a new method for determining the maturity of the skeleton in those not yet adult. The scope of the longitudinal study was expanded to include emphases on the composition of the body and on risk factors for chronic diseases including body composition, blood pressure and blood lipid levels. Sophisticated statistical methods were applied in all analyses to utilize fully the serial nature of the data. The collection and analysis of genetic data were increased markedly. These research efforts were recognized within the United States and abroad. Alex received awards and honors from many research organizations and was elected President of two international associations. He organized and chaired 29 international and national research conferences.

Alex was preceded in death by his parents and by Eileen, who was his loving wife for 57 years. He is survived by his children, Peter and his wife Ginni, of Enon, Stephen, of Boston, and Margaret Adams and her husband Charles, of Yellow Springs; by his grandchildren: Eric Adams and his wife Alexis, of Yellow Springs, and Nicole Will and her husband Matt, of Centerville; and by his great-grandchildren Kendall, Stella, Memphis, Adelyn and Carter. Alex has cousins, John and Rosalind Roche in Tennessee and many more relatives in Australia.