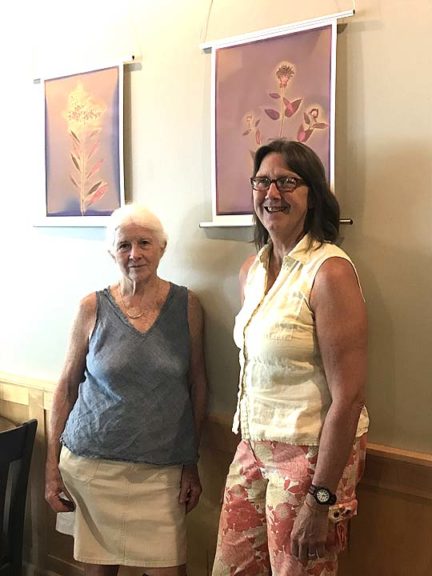 Photographer Dennie Eagleson, a volunteer with Tecumseh Land Trust (left), and TLT Executive Director Krista Magaw recently posed by two of Eagleson’s lumen prints on display in “The Pollinator Show” at The Winds Café through August. A public reception will be Sunday, July 16, 5–7 p.m. (Photo by Carol Simmons)

Bees, butterflies, hummingbirds, even some bats. Pollinators all, they provide a vital life-sustaining role in our global ecosystem.

And if not considered beautiful by everyone, all pollinators are pretty cool, especially to those who understand their critical role in maintaing our environmental health. These same people are also worried, however, as many pollinator populations decline and certain species face possible extinction.

The issue is heavy on the minds of the staff and volunteers with the Tecumseh Land Trust. The locally based nonprofit’s primary focus is on the preservation from development of agricultural and other natural lands in the region. But with land conservation comes an appreciation for the qualities that make natural resources healthy and sustaining.

That appreciation is behind TLT’s creation of a new art exhibition at The Winds Café. On display through August, the “Pollinator Show” features about 25 works by local and regional artists whose images are inspired by pollinators and the plants that best feed them. An opening reception is planned Sunday, July 16, 5–7 p.m.

The works are a mix of mostly photography-based processes and prints.

“A lot of the work is experimental in terms of process,” said Dennie Eagleson, a TLT volunteer who curated the exhibition with the land trust’s executive director, Krista Magaw.

The two women, who are also artists, each have new works in the show as well. Eagleson has created a series of lumen prints in which she arranges “botanical materials on photographic paper that gets exposed to the sun.” The results are haunting and atmospheric and suprisingly colorful.

Magaw, who in the past primarily worked with paint, has created monotype prints using botanical materials and insects as subject and medium.

“I was playing with positive and negative” in creating the airy, dreamy compositions, she said.

The show also includes two large paintings and a monotype by locally based artist Jennifer Rosengarten, who currently has a one-person show at Springfield Art Museum. In addition, manipulated photographs by Central State University engineering professor Ramani Kandiah, as well as the winning pictures from TLT’s 2016 Pollinator Photography Contest are on view, among other contributions.

Most of the works are for sale, with a percentage of the sales going to support the land trust’s mission.

While TLT’s goal in mounting the exhibition is to present works that collectively stand as an artistic whole, there is also an educational component in raising of awareness about pollinators.

“TLT has been really involved in education around creating habitats for pollinators,” Eagleson said. Efforts have included not only protecting local lands and waterways, but also presenting a variety of farm and garden tours that highlight pollinator habitats. She noted that TLT also supports “Antioch’s commitment to being a pollinator friendly environment” and the local food group’s pollinator-related activities.

She said that individuals can play a part not only by growing their own pollinator friendly gardens and yards, but also in urging large “box” stores to stop using certain insecticides on their plants that when purchased and brought home prove lethal to bees.

A sign hung at the show suggests people go online to http://www.xerces.org to learn more about pollinators and ways to get involved.  The website is that of the Xerces Society for Invertebrate Conservation, an international nonprofit group that is named for the now extinct Xerces blue butterfly, “the first butterfly known to go extinct in North America as the result of human activities,” according to the site.