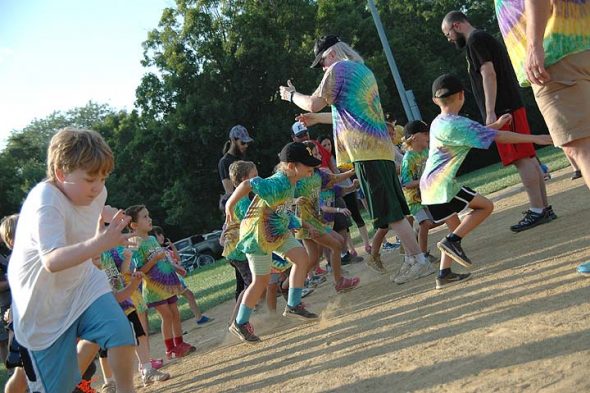 Last Friday, longtime Perry League T-ball coach Jimmy Chesire, center, gave the signal that started a herd of t-ballers stampeding towards the light pole to do stretches and warm-ups for the final “1,000 strikes” of the summer at last year's final night of T-ball. (Photo by Isaac Delamatre)

Julia Camard, 3, runs up to me at the tee.  She has a couple of balloons, twisted and wound together to make an animal. “I got it at the library,” she says and that three-syllable-word — lie-brair-ree — comes out distinctly and quite impressively – a ten-year old word expressed so clearly by a three-year-old. “It’s for you,” she says and I am delighted and flattered.

Her big sister Louise joins us. Her balloon-animal-or-whatever-it-was has come unwound and is now a long, red, single balloon bent in half so it makes a large balloon U.

Lily Miller, 11, and Tommy Moore, 9, throw balls out to the kids from the first base line. The kids in the field gather them up and throw them back — but as often as not, they throw the balls ten feet over Lily and Tommy’s heads.  Here we have another example of the spontaneous creativity of our T-ball kids— they have created a game and competition within our greater overall T-ball game.  The running, the winding up, the throwing high and wide, the shouts of joy and bursts of laughter are all ample evidence of a good time being had by all.  And Lily and Tommy were stellar.  They stayed at it, they worked their posts all evening, both of them putting in a solid 60 minutes of play— most people, kids and adults alike, last about 30 minutes before needing to split.

Avery Tobias, 7, came to play and she was fantastic, a confident, poised and polished athlete. She hit well, knocking the ball off the tee with but one swing, an unusual feat, sending it skittering and firing hot and fast across the diamond, past and through the legs of the waiting children.

We give kids a thousand strikes in T-ball and many of these miniature marvels need the extra swings to properly connect and get a “real” hit.  Like the animated, super-interested Mateo Valdez-Malishenko, 2½, who bumps the ball off the tee, picks it up, puts it back on the tee, and bumps it off again — which he does, this bump-it-off-pick-it-up, bump-it-off-again routine, a half a dozen times before — lo and behold!  He really connects, sending a hot grounder across the infield and all the way into centerfield, which is where he goes, too, chasing after his own hit, his bat still in hands.

Natalia Ramirez, 5, created a lovely loving moment for me.  She scoops up a ball thrown out by Lily Miller and Tommy Moore and brings it to me. Only she races at me, running full-tilt, as fast as she can, and rams herself chest-high right into me. It is stunning and hilarious.  And very sweet and touching. She slams into me and for a brief moment she throws her arms around me, giving me a great big hug. I love it and feel blessed. Other kids discover this new T-ball wrinkle. Suddenly I am facing three children racing at me, three children slamming into me — Amelia (Milly) Linse, 5, Natalia, 5, and Zane Fink, 6.  It is joyous and free.  A harvest of love, love, love on the T-ball diamond.

Evan Botkin, 5, Lily Marie Brown, 5, Rocket Cowperthwaite, 6, and Natalia Ramirez climb the chain link fence that surrounds our outfield.  These kids are agile, sure-footed, equal to the task. Evan climbs up and over.  Rocket scrambles up and over.  Lily and Natalia race lickety-split back and forth along the fence shouting their excitement and encouragement. Meanwhile, Cameron Richeson, 5, displays his phenomenal ball player skills.  He is fierce, focused, and full of fun at the tee as he blasts one hot grounder after another. Luke Miller, 3, swings, hits, whoops-for-joy! And runs the bases with the abandon of a bat startled from its upside down sleep in some river cave. Bridger Longworth, 5, and his older brother Owsley, 7, is with us.  Bridger hits quickly, smoothly, with a good athlete’s ease.  His brother Owsley in the meantime has scaled the chain-linked fence that connects to the home plate backstop.  Once he’s up there he stands firm and proud, like a sailor in the crow’s nest of a whaling ship, the handsome boy talking us out to sea.

Sophia Purdin, 6, comes to hit a “baby hit.”  She has a small fist-sized doll she calls her baby in her hand.  She squats next the tee and swings up at the ball as if she were that small doll creature hitting the ball.  Paige Clark, 7, a rare beauty (her eyes are gold!), is very skilled at all this T-ball stuff, especially hitting and running.  Her little brother Levi, 5, looking very cool in his sunglasses, is standing behind her at the plate. “He will run with me,” she says.  And when she blasts the ball off the tee, he does.

*The final night of Perry League for the season was held Friday, Aug. 4. Look for Coach Jimmy’s write-up in the Aug. 10 issue of the News.