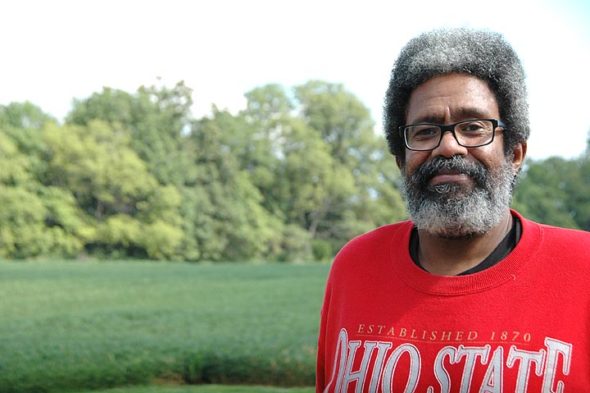 Village meter reader Brian Upchurch, a 1984 graduate of Yellow Springs High School, is recuperating at home after sustaining serious injuries in a car accident June 23 while on the job. (Photo by Carol Simmons)

Meter man Upchurch on the mend

Yellow Springs native and Village meter reader Brian Upchurch may not befriend everyone he meets, but it’s not for lack of effort on his part.

“I’m friendly until someone gives me a reason not to be,” he said last week from his home outside Urbana, where he is continuing to recover after sustaining serious injuries in a car accident while on the job earlier this summer.

It’s hard to imagine what Upchurch considers a good enough reason to curtail his favor, given the broad network of villagers with whom he’s on an amiable, if not affectionate, first-name basis. Those connections account for much of the deep and widespread concern for his well-being as word of the June 23 accident traveled through town.

According to police, the car he was driving, a Village-owned Crown Victoria, was “T-boned” by another vehicle as he turned left from Ohio 343 onto U.S. 68. It was late in the afternoon, near the end of his shift, and he remembers the day as rainy. “The power had been out that day,” he said

He also remembers not only seeing the other car, a Camry, just inches from impact, but also the immediate understanding of what was about to happen, and not being able to do anything about it.

After that, the details are spottier.

He does remember worrying about breaking his hips, having returned to work only months earlier after recovering from a second hip replacement — the first having been the year before.

The force of the crash turned his car around and sent it into the grass on the side of the road. Upchurch was trapped inside, immobilized, and he had to be cut out. After he was freed, he said he had to walk several yards to get to the medics’ gurney. He’s not sure how he did it.

Doctors later told Upchurch he had a broken pelvis, a broken spine, three broken ribs and a lacerated spleen. He was also thoroughly battered and bruised. Nothing was life-threatening, but he said the doctors said that if any of the most serious injuries had been slightly more severe, he easily could have died.

He considers himself lucky on multiple fronts: his hips remained intact, his injuries would heal and he was alive.

And the fact that he was working when the accident occurred means that he is counting on workman’s compensation to take care of his medical expenses.

He also values the immediate support of Village staff, friends and family.

Village Manager Patti Bates came to the crash site and then waited at Greene Memorial Hospital with his sister, Sherri Upchurch Blackwell, co-worker Ben Sparks, and other friends, to meet his ambulance, Upchurch said. The injury to his spleen led doctors to soon transfer him, by then on heavy painkillers, to Kettering Memorial Hospital, where he remained for five days before being released to finish his recovery at home.

There, recuperation has been steady, but the separation from work and his social life has been difficult, he said.

He’s managed to join friends in town a couple of times in the past two weeks, but he said he soon reaches his limit. “I can stay out about two hours and then I get really tired.”

The 35-minute drive between his home of the past two years, amidst farmland outside Urbana, is also daunting, even as he grows stronger. The house, where he lives with his sister, is the parsonage of nearby Concord United Methodist church where his sister is pastor.

A 1984 graduate of Yellow Springs High School, Upchurch also has an older brother, Mark, who lives in San Diego, Calif., with his family.

After high school, Upchurch left town for college in Colorado, and after two years there, transferred to California State, where he earned a degree in communications. He then lived in Oregon for an extended time before returning to Yellow Springs in 2008. He worked at Glen Helen, with Gregor Construction and at Peach’s before going to work for the Village. He said he started as a part-time seasonal employee, went to permanent part-time and then became permanent full-time just last year.

“Brian is a very friendly and outgoing guy, and he is a good worker,” said Village Manager Bates. “We certainly hope that he makes a a full and speedy recovery and comes on back to work with the Village.”

Those sentiments are widely shared.

He’s been showered with calls, cards and Facebook messages wishing him well. He said they’ve bolstered his spirits throughout his ordeal. Given Upchurch’s sociability, friends know that the first days at home must have been a pretty rough time when he didn’t feel up to having visitors.

He said the pain was so great in the first weeks after the accident that he had trouble sleeping. He also had difficulty breathing, especially when he lay down, making sleep even more difficult. Medical tests revealed some reduced heart functioning, which he said the doctors told him was a pre-existing condition, but he thinks was the result of the accident.

“I walked four-and-a-half miles every day, bending up and down to read meters, and never had any problems,” he said.

He hated missing out on summer gatherings in town, especially the Fourth of July celebrations and the annual all-year high school reunion that takes place that weekend.

A proud Yellow Springs High School alum, he said he looks forward to the reunion with his former classmates. “If they come home just once a year, they come home the Fourth of July,” he said.

“All kinds of people were texting me. That was frustrating. I was really sad.”

What’s more, the death of a former classmate this past year gave him a sense of the preciousness of each gathering.

The seriousness of his accident was another stark reminder to cherish each moment with friends and loved ones.

“A big accident like that makes you think about what’s really important,” he said.

Having recently caught the “acting bug,” he also regretted not being able to participate in the Yellow Springs Theater Company’s production of “Julius Caesar” last month. “I was supposed to play Cicero,” he said. “I was really sad I missed that.” He was able, however, to attend a performance, which he said he enjoyed.

Upchurch hopes to be back at work soon. The occupational therapist and twice weekly in-home physical therapist visits  have concluded. He’s moved from using a walker to a cane to walking mostly unaided. “I feel OK. I’m off of all my medicine. I can feel a click along the belt line of my back, but it’s not bad.”

“Hopefully I can get up to four hours,” he said of his recent two-hour activity limit, and then go back to work at least half-time.