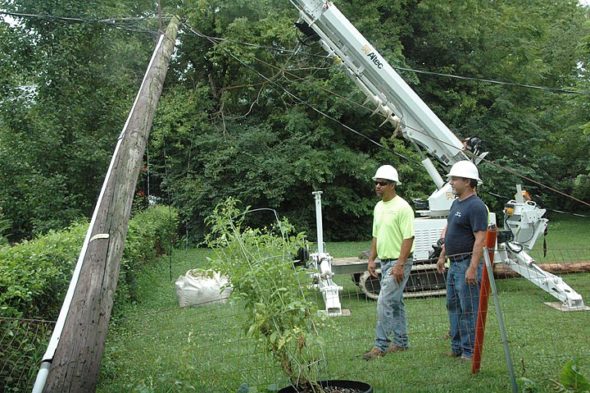 Johnnie Burns, right, the Village of Yellow Springs superintendent of electric and water distribution, recently received a Larry Hobart “Seven Hats” award from the the American Association of Public Power, a national award honoring managers of small town utilities. Burns is shown here last Friday helping to reset an electric pole on Walnut Street knocked over by a fallen tree. At left is Kent Harding. (Photo by Diane Chiddister)

It was frigid weather on Valentine’s Day 2014, and Johnnie Burns had been head of the Village electric and water distribution crew for only a few weeks.

In the morning the calls to the Village utilities office began, from several local homes whose residents awoke to discover no running water.

Burns and his crew soon appeared in the middle of the road on Fairfield Pike on the north edge of the village, where the water had mysteriously stopped running. Wearing heavy coats and gloves, the Village employees first had to figure out what the problem was — was a pipe broken or frozen? — and then had to locate the pipe. It wasn’t easy.

At the time, Village government maps of utility lines didn’t always give exact locations, and past crew leaders, called in for the emergency, either couldn’t be found or didn’t know the answers.

So, in the freezing cold, the crew began digging. It was a long, frigid day followed by two more frigid weekend days of digging outside, during which the crew identified the source of the problem — a pipe was indeed frozen — then had to locate the pipe’s exact location. Then they had to figure out how to unfreeze the pipe.

As well as leading the crew, Burns felt responsible to those in the affected homes, whom he personally updated as he delivered big jugs of water (full disclosure: this writer was one of the homeowners). He also gave homeowners instructions on boiling tap water, when it finally thawed, until testing had been completed.

The crew devised a solution for thawing the pipe, which first required about 12 hours of jackhammering the street.

Finally, on the fourth day, the bundled-up crew members were standing waist-deep in a hole in the road. Suddenly, they heard the sound of running water.

“We were pretty excited,” Burns said.

It was the first big test for Burns as the new Village crew leader, and the situation was fraught. “It was a unique challenge,” he said in a recent interview. “I was in charge, but I was also the new guy on the crew. And there were people who didn’t have water.”

So Burns did what he believes leaders should do to gain respect and authority:  he got right in and worked with his men (and one woman). In fact, while everyone worked hard outside in the frigid weather, he worked harder. Or at the least, he worked longer. Along with working through the weekend, for three nights in a row he slept (or attempted to sleep) in his cold truck parked on the side of Fairfield Pike, just in case the water thawed in the night.

“Don’t ask your employees to do anything you don’t want to do,” he said.

Recently, Burns received national recogniton for the work ethic and commitment he exhibited during that emergency, and as a Village employee since then. In June, after being nominated by AMP Ohio, he received the 2017 Larry Hobart Seven Hats award from the American Public Power Association at its annual conference in Florida, one of five managers of electric utilities in small towns from across the nation so honored. The small town leaders are honored because their “variety of management responsibilities extends well beyond those of a manager in a larger system with a larger staff,” according to the APPA website, and nominees for the award had to demonstrate skills in the areas of planning and design, administration, public relations, field supervision, accounting, human resources and community leadership.

The award was well-deserved, according to Village Manager Patti Bates.

“Johnnie Burns is an outstanding employee,” she wrote in an email. “His dedication to the Village and its residents has never wavered. He goes out of his way to respond quickly in emergencies and resolve issues for residents, and thinks ‘outside the box’ to find cost-effective solutions to problems. He truly deserves the National Seven Hats Award and we congratulate him and thank him for the work.”

The award means a lot after a long career of hard work, Burns said.

“This is what I’ve worked for all my life,” he said. “It’s the highest honor of my career.”

Burns came to Village government three years ago after 28 years working with electricity, replacing longtime crew head Kelley Fox, and soon became trained in water as well. His responsibility to keep Village electric and water lines humming is the natural extension of what he’s been doing his whole life, since as long as Burns can remember he’s been fixing things. Growing up outside Xenia as one of four children of a single mom, he and his siblings repaired whatever was broken, whether a bike or a lawn mower. Their mom had three jobs, and Burns remembers that after her first job during the day, she’d pick the kids up from school and sometimes take them along to her job cleaning office buildings. Then later at home as the children slept, she mended clothes for a local dry cleaner.

His mom inspired him, Burns said, because she worked long and hard and never complained.

“He’s a great leader who models a strong work ethic for his employees and a deep caring for the Village and every customer he serves,” she wrote in an email.

Of course, he doesn’t do it alone. Burns is quick to recognize his crew members for their contribution: Ben Sparks, Chris Hamilton, Jeff Horn and meter readers Brian Upchurch and Dustin Harris.

Burns stumbled onto his career choice in high school, when he attended the Greene County Career Center to study welding. When a teacher asked for volunteers to help build a lab, Burns offered to help, and it was his first time wiring electric. He got hooked right then and there, with the variety and challenge of the work.

“It’s hands-on, and it’s never the same job from day to day,” he said.

After completing electrical training and serving in the military, Burns began working for H & W Electric. Then he moved to Reddy Electric, where he worked about 20 years, starting out as a service electrician before moving into commercial work. After training in project management in 2007, he became a project manager for an outside crew, supervising 16 workers and up to 40 people when working on the commercial side of the business.

Working with electricity often means being called in during emergencies, both local and national. Burns was one of many electricians who answered a request to help get New Orleans pharmacies up and running following Hurricane Katrina, so people could get their medicine. He took two weeks of vacation time to travel to New Orleans where, with other electricians, he was escorted by the National Guard to work at CVS sites. At night they slept in mobile homes in a parking lot across the street from the Superdome.

In another example, Burns was called out following the ice storm in 2004 that cut a swath through southcentral Ohio. He was away from home from just after Thanksgiving to the New Year, Burns said, fixing downed wires.

“It was a long week,” he said recently.

In Yellow Springs, Burns begins his day at 7 a.m. at the Village-owned Sutton Farm, where the Village utility crews keep their equipment. He checks the white board to see what tasks need to be done, then assigns work to crew members, helping out if he’s needed. If his crew members can handle what needs to be done, he’ll check into his Bryan Center office. There, he orders supplies for upcoming projects, pays invoices, responds to concerns from villagers and answers any questions coming from Village staff, such as Manager Bates or Zoning Administrator Denise Swinger. He’s also helping to design the new Village-owned solar farm on the Glass Farm, along with helping out with the utility extension to the Center for Business and Education, or CBE.

“I try to organize, look to the future to make sure we have what we need for the next project,” he said. “You do multiple things, I don’t just come in and do electric.”

Mindful of the challenge he and his crew faced during the Valentine’s Day 2014 emergency water outage, Burns is attempting to update the Village’s knowledge base regarding its electric and water distribution lines. He’s purchased a GIS system to map Village lines electronically, and also uses Google maps to input information, such as the size of the pipe and year of installation, on each water line or electrical circuit. The information is accessible with the tap of a finger.

Previously, critical information had been lost when a longtime Village employee retired, Burns said, but he’s aiming to change that.

“When I came on, it was a challenge,” he said. “We want to put in protection so it won’t happen again.”

Burns is working to improve efficiency in other ways as well. Last year, the Village swapped out its manual electric meters for meters that can be read electronically. What was once a full-time job checking meters became a task that takes less than an hour, freeing up that employee to perform other jobs.

Burns would like to make the same upgrade with water meters. People don’t like change, Burns knows, and trying to do things differently sparks resistance from both village residents and Village employees, but he’s pushing for the upgrade, and not afraid of using technology to makes things run better.

“The technology is out there, we just have to get to that point,” he said.

Away from work, Burns’ life centers on family. He’s had a long and happy marriage to Traci, his best friend, for 28 years, and stays close to his two grown children and four grandchildren, whose pictures adorn his office. In fact, the hardest part about leaving Reddy Electric was no longer working with his son, who was part of his crew.

“I got to see him at work every day,” Burns said.

“I treat the village as if it were my house and the money we’re spending is coming out of my pocket,” he said.

The life of a small-town utility manager is never dull, what with the never-ending responsibility for keeping things humming along. But Burns finds the demands of the job always interesting and fulfulling.