BLOG — After the Story: The Grannies of Waitaha

The balance between being a pastor and a reporter is sometimes difficult for me, in that I bring Pastor Aaron to interviews and stories where I should be looking with the eyes of a journalist. That was especially true regarding the story I wrote on “the grannies,” the three beautiful souls from the Waitaha tradition of the Maori peoples who were brought here by Raymond Ruka, who is a priest. He issued a tautoko (tau-tō-kō), a traditional invitation from a male elder to his female sisters to come and act as an advocate for humanity. I confess that my soul loves Raymond’s soul–we have felt them move together in a cosmic dance.

Wonderful? Without question. But not something I can mention without being brutally honest about the experience.

I minister within a colonialist religion. I claim the same cross as was displayed when millions of indigenous persons were slaughtered, brutalized, raped, kidnapped, and enslaved. The love of Christ too often is replaced by the life of the sword, service to others is rendered secondary to an obsession with Mammon. Churches sit on land we stole and claim to own. Through the eyes of indigenous persons, the cross of Christ looks like the Imperial eagle of Rome: a sign of oppression and immoral power.

All of us have complex identities that are shaped in part by forces outside our time and space. The gospel of Jesus Christ is the foundation upon which I imperfectly build my life. With that comes a history fraught with unthinkable atrocities and distortions of Christ’s love; I cannot ignore that Christianity in the United States has too long been defined by requiring specific confessions of the lips while ignoring the hearts and wisdom of other religions and traditions. This is not something I can just say, “Well, I didn’t do it personally so I have no responsibility to address the injustices.” Everyone who is a member of the Body of Christ is complicit in continuing institutional abomination.

Before I had even crossed the threshold of Raymond and Jenny’s home, he was calling out to me,”Brother!” and an offer of tea was extended. After hugging Raymond, I was greeted in turn by each “grannie” with the traditional welcome: we touched noses, symbolizing us exchanging breath — which in both our religious systems symbolizes the life-force — then touched foreheads, and finally exchanged a kiss on one another’s cheek. A deep, warm embrace that felt like home came from each granny. Kathy, Rosie, and Jane (their western names) radiated a similar spiritual energy as does Raymond, and I felt the significance of the moment. They were sitting in the living room because the male tribal elder extended an invitation to come. This was not a casual visit. This was ancestral power supported by Father Sky and Mother Earth.

Three of my strongest and most consistent teachers about native cultures have been Alicia Lowrance Pagan, Ray Two Crows Wallen, and Sommer McGuire. Sommer is one of my dearest friends and also is Director of Social Justice Concerns for the Beloved Community Project. She had advised me to bring offerings to them and made some suggestions appropriate to their culture. I had the idea to present on behalf of First Presby a ritual cup that has been used in worship and from me a wonderful book by scholar Elizabeth A. Johnson called Friends of God and Prophets: A Feminist Theological Reading of the Communion of Saints. When we hosted two Muslim visitors in worship, we presented them each mosaic cups made by former Yellow Springs resident Johanna Smith, who is Jewish (and also a dear spiritual companion to me). The communal cup reminds us that we all draw from the same source and are reliant upon the same grace. So, yeah. We are one another’s keeper. Sommer agreed fully that these were apropos. 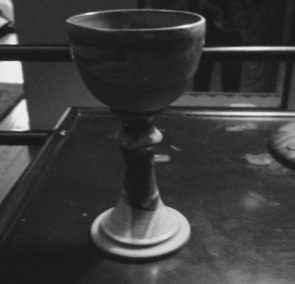 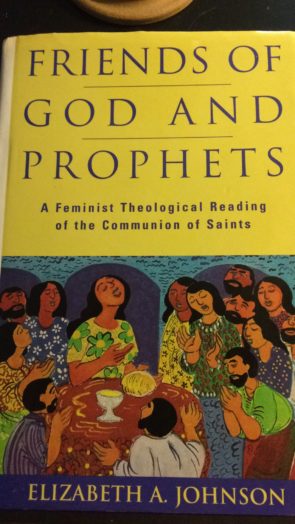 Top: The Communion cup presented by First Presbyterian
Bottom: The book I presented as a sign of respect

They received the offerings most gratefully, but that’s not why I’m writing this.

Guilt is not really useful in the long run; it can once again center the wrong people, feelings, and issues; I have yet to meet a person impacted by colonialist oppression who wants anyone to feel guilty about what happened in the past. They just want it to stop from continuing. What I am writing about is glimpsing the heartbreaking loss that has occurred because Christianity is wielded like a rapier and culture as a cudgel.

On Tuesday, August 29 the grannies visited our local schools. They visited Ms. Hoover’s 2nd-grade classroom and I was able to join. I always enjoy encountering schoolmates who are serving the community as adults. There were many children I recognized and I felt acutely the power of loving community. But what happened to start the program took my breath away.

Jane explained to the children that the only way that the grannies could come and speak at the schools was if an invitation was extended by a First Nations tribal elder. Raymond extended the invitation appropriate for the Maori culture, but a second had to come from a Native American. One such tribal elder who is also a friend of Raymond’s traveled from North Dakota to make the public invitation. 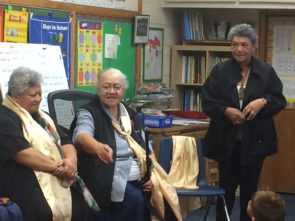 From left: Kathy, Rosie, and Jane

This is profound for several reasons. One, the sense of respect and connection that indigenous persons have for one another is a model for us all. Two, this respect did not arise as a result of colonialism, it survived despite colonialism. Three, in the context of the United States, boundaries are drawn so as to cordon or separate. The ancient custom played out in a classroom that holds countless memories for generations of us in Yellow Springs is one developed on this land by her native peoples. It hurt my heart because the ancestral knowledge of so many indigenous cultures has been wiped out by so-called Christians. All for the propagation of western “civilization.” I felt like Pilate with blood on his hands, not like one redeemed by the love of God.

Growing up, I had three grandmothers. Divorce amongst the greatest generation was rare, but it happened. So I got an extra granny. I loved them all. Each impacted me in different ways, but three grannies were my reality in childhood. All of them have now moved on to the next journey. Having the three Waitaha grannies lay hands on me, pray and sing, with Raymond offering a blessing was one of the most powerful spiritual moments of my life. It made it difficult to write a straight news story. I tried. But I definitely had a lot going on internally. It is hard to remain neutral when your soul has been touched.

The dignity and well-being of indigenous Americans have never been a serious national priority. As our country grapples with perhaps the most difficult period since the Civil War, perhaps it is time to realize that we will never be able “move on” from our history if we don’t engage in restorative justice, which was begun by the Māori people. We must redress in serious ways the egregious wrongs done to indigenous persons both native and kidnapped.

Let us listen more to our elders who speak with spiritual wisdom, and less to those who think genocide is not so important as the stock market. Let each of us commit to listening and to no longer accepting, even tacitly, those structures that continue to devalue lives and spirits.

As for this pastor trying desperately to be a good reporter, I am profoundly grateful for Raymond Ruka. For his heart and his compassion, his loving energy and for the gifts he so freely gives. He sees the world in ways we’d do well to heed. 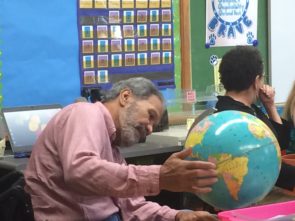