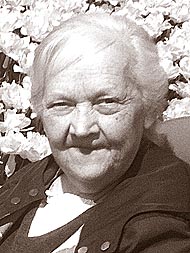 Irene Beatrice Kraus, formerly of Yellow Springs and Fairborn, Ohio, passed away in Kirkland, Wash., on Oct. 20, 2017. In a moment, the world lost an unabating source of optimism, wisdom and humor. In her final days, her strength almost gone, she was told about all the family members there in her room. “It’s a party!” she declared. Yes, mom, it was — and always seemed to be, wherever you were.

There are people in this world who, when you think of them, produce an immediate glow in your heart. Irene was one.

Born in Lithuania in 1939, Irene Diliauskas and her parents fled their home as the Soviet Union advanced near the end of World War II. She and her mother became separated from her father. They reunited months later, at a lighthouse in Germany, where a malnourished father handed his hungry daughter an apple he had refused to take one bite of for himself. After living in a displaced persons camp for several years, Irene left Germany with her father, Antanas; mother, Anele; and little sister Joanna (born in the camp), arriving in New York City’s Ellis Island aboard the USNS General W. M. Black in May 1950. The family settled in Baltimore, Md. As a girl, Irene showed an independent streak. For a time, she took her piano lesson money, skipped the lessons and bought treats for herself and her friends. She worried little of the certainty of eventually getting caught, survived the parental fallout, and ended up taking up the accordion. As a young woman, Irene wanted to get to know a young man named Michael Kraus, so she invited him over to listen to jazz records, an interest of his. They married, and later moved to Yellow Springs in the early 1960s. During that time, they had three sons, Dennis, Jerome and Peter.

Irene lived in Chicago for a number of years and returned to Yellow Springs in the mid-1970s. When her boys were growing up, all their friends knew Irene as a welcoming presence and a reliable source of plentiful comfort food — her favorite currency for showing love. She was a mother figure to all who needed one. Irene spent most of her career as a financial aid administrator at the Greene County Career Center in Xenia, advancing with no college degree — but plenty of ability and persistence — to a position that should have required one. In the mid-1980s, Irene completed this unfinished business, earning her bachelor’s degree from Antioch University. After retiring, she moved to Fairborn, where she enjoyed cooking for her disabled neighbors and feeding the squirrels.

Irene experienced crushing losses without breaking. Her little sister died as a young woman in the early ’70s, and her oldest son in his prime, 30 years later. She never hid from her pain, but she never let it extinguish her caring, humor, and gratitude.

Irene spent her later years near her family in the Seattle area, enchanting everyone she met. She became a favorite customer of the local grocery store, where the employees adored her and pointed her to the freshest foods. Entertaining and indulging her granddaughter, Elizabeth, and her grandsons, Leo and Ollie, brought her the greatest joy. She is survived by her sons Jerome (wife Sheri) and Peter (wife Erin) and three grandchildren. They — and all the lives she touched over 78 years — miss her as powerfully as her memory lives in their hearts.