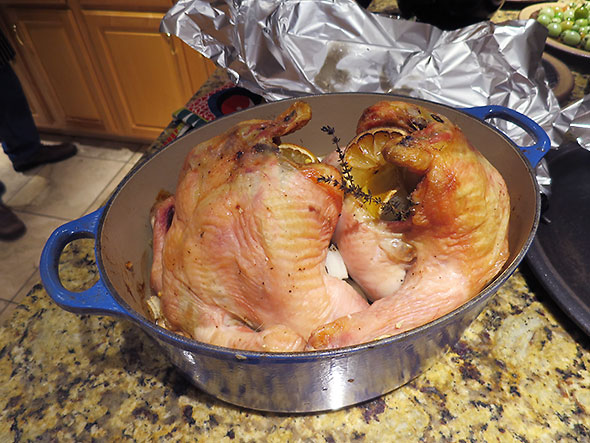 One of my favorite food articles of late was a spread done for the New York Times Magazine. I clicked on the article’s splendid lead featuring four people orchestrating dipping croutons into a cheese fondue. Once the page loaded however, the carefully arranged tablescape was erased and replaced with a littered field of napkins, crumbs, and spent tableware.

To be frank, I was a bit appalled. I quickly scanned the rest of the article looking for examples of the splendor that the teaser link had promised. Nothing, nothing, then at the bottom of the article there they were five stories of dinner parties planned, arranged, and delivered to please.

I read through two of the stories than returned to the masthead, more prepared to confront the chaos that represented the aftermath of one. There I found the story of a young person’s enticing introduction to adult dinner parties in the lingering aroma of what was left to clean up the next morning.

The account to me back to my own introduction to the intimate home party. A close extended family of church goers we attended many hootenannies and square dances. However, New Years Eve was a different occasion…more adventurous and more elegant than the others. We would travel down our road past the Asbury church that hosted many a dance to the farmhouse of the Twiggs, our dear neighbors and fellow church folk. Their house seemed to expand to unfathomable size when opened for this holiday. The buffet table in the dining room, the comfortable and ample sitting space in the living room, the enticing pool room and den upstairs. The children were given full reign of the den but more often than not I stayed in the pool room long before I was allowed to play. My aim was to avoid the Frankenstein feature movie played on the den’s television.

As midnight neared, I’d seek out my mother often talking with adults in the living room, singing with a group led by my Uncle Glenn, or watching a film on another television in THAT room. It’s a Mad, Mad, Mad, Mad World was the perennial favorite in the living room. Settling in her lap or…as I grew…at her feet, I’d charge my mother with the job of keeping me awake until midnight. I’m not sure how seriously she took that task; all I remember are the many times that I woke buried in coats in one of the home’s bedrooms.

By the time I could finally stay awake past 11pm, I was old enough to play pool.

Whenever we host a dinner party at the house, my thoughts turn to the Twiggs…how they opened their home year after year to friends young and old and made us all welcome. And so it was this Saturday when Jeremy and I hosted the Progressive Dinner hosted by Yellow Springs Home Inc.

This is the third year now that we hosted. There is an element of uncertainty in who will arrive as last minute tickets are sold and the final arrangements are put in place. As we did last year, we roasted two twin turkeys in a french oven stuffing them with aromatic herbs, lemon, and onion. Along with this tried and true dish, we decided to be adventurous. I pulled out two cups of pearl couscous from the pantry and we began dicing shallot, ginger, butternut squash, and dates for a tagine.

We’ve made casserole before but this would be our first official tagine. A deeply flavorful dish slow cooked on the stove in a traditional clay pot. We had a choice of two clay cookware from the Miami Valley Pottery: a medium-sized tagine in cobalt blue with a chimney shaped lid or a larger milk-white tagine fitted with a smaller bowl as its lid. Looking at the collection of ingredients, we prudently selected the larger tagine.

Selecting a recipe proved tricky. We consulted the internet and our various cookbooks. Simple dishes were cooked in everyday casseroles while the dishes cooked in traditional tagines were either too elaborate or too vague. We decided to pare down a recipe from Mark Bittman’s How to Cook Everything Vegetarian calling for vegetable stock and a cornucopia of vegetables.

Add olive oil and shallots to a dutch oven over medium heat and brown for 5 minutes. Add wine a Tablespoon at a time as you add ginger and butternut squash until vegetables have softened. Salt to taste and add vegetable stock and couscous. Cover the dutch oven and lower the heat to simmer. Let sit until the couscous has absorbed the liquid. Transfer mixture to gently warmed tagine stirring in the dates and almonds to the mixture as you go. Gently simmer for a hour or so. Serve in pot.

Now when I say “we”, I mean both Jeremy and I. We concocted the dish together. Normally one or the other of us cooks while the other is otherwise occupied. Saturday was an improvisation dance in which we took turns leading as we moved step by step. I diced shallots and ginger while Jeremy peeled and chopped the butternut squash. I worked on slivering salted almonds and dates as Jeremy put hands on vegetable stock. When I began browning the shallots, Jeremy winced inwardly. Then, when he added an entire box of vegetable stock, my eyes popped wondering how the couscous would absorb all that liquid. It most certainly did. We laughed afterwards at how we each took the lead in turn leaving our partner’s head spinning.

Once the dutch oven was free of the couscous mixture, we loaded the pot up with chicken. The tagine slow cooked the pasta dish while the twin birds gradually came up to temperature over then next hour and a half. We took the chicken out of the oven 15 minutes before the first guest arrive. A happy coincidence that left us a bit stunned at the excellent timing. We felt very adult, practiced and competent.

When our five guests settled in, we opened bottles of wine and my favorite hard cider. We took the tagine from the stove and placed it on the table with salad and a warmed artichoke focaccia. I carved the birds tender and passed out helpings of white and dark meat. One guest asked for crispy skin and I promised myself to spatcock the birds next year.

The table was set with our new plates from Miami Valley Pottery, the wine glasses we got as wedding gifts, and water glasses I found on YS Virtual Yard Sale. But who had come to dinner?

Why our neighbors, of course! The answer was a delicious medley of lively people much like the improvised bouquet that simmered in our tagine.

At the end of the evening, I had witnessed the magic of the dinner party. What mattered was not what was on the table so much as the wonderful people who surrounded it…their stories of English literature, life at sea, and the treasure that is a good grocer.