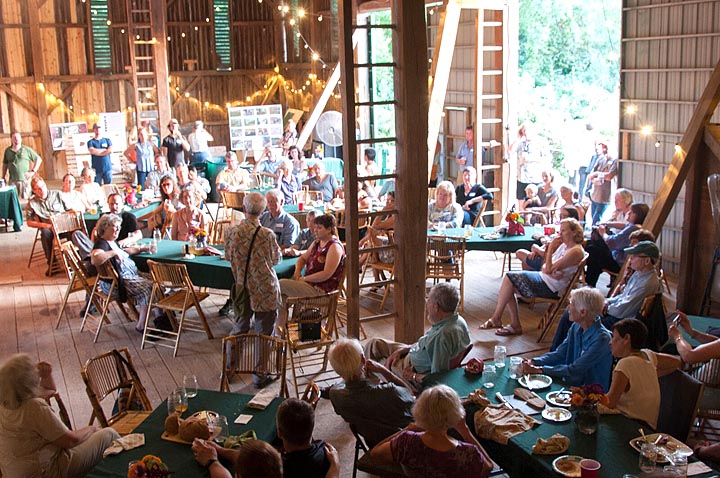 Locally based poet Ed Davis read some of his work during a community dinner in August to celebrate Community Solutions’ Agraria project. The dinner, featuring locally sourced foods, was held in the property’s 7,000-square-foot barn. (Submitted Photo)

More than six months after the Arthur Morgan Institute for Community Solutions signed the necessary papers to purchase its new 128-acre property on the western edge of the village, a comprehensive vision for the land is solidifying.

Since acquiring two parcels of the former Arnovitz Farm at auction last March, the local nonprofit has held a series of focus group gatherings with area farmers, researchers, educators and local community members while at the same time rehabbing the house, barn and a former workshop and garage at 131 E. Dayton-Yellow Springs Road.

The repurposed workshop and garage will be the organization’s new offices, while the barn will host educational and community events, and the house will serve other organizational needs, including as home for Community Solutions Executive Director Susan Jennings as well as an AmeriCorps Vista worker.

An open house for the community is planned Thursday, Dec. 21, including a “gratitude walk” along with music and food.

“It’s been really fun,” Director Jennings said in a recent interview on the property. “It’s also been chaotic and stressful. But it’s definitely been a really adventurous ride.”

More than 200 people have participated in focus group dinners since Community Solutions closed on the property at the end of April, Jennings said. Those gatherings, along with visits to agriculture-based research centers elsewhere in the country have resulted in the development of a “fairly comprehensive plan for Agraria,” she said.

Within that plan, several major strands have emerged: an educational component; an environmental piece; and an organic farm-business focus.

With the property close to the Yellow Springs High School and McKinney Middle School campus, both Community Solutions and school leaders see multiple opportunities for local students to get out and onto the land.

The granting of an easement by adjacent property owners Rick and Mary Donahoe to construct a public path for walking or biking between the middle/high school campus and the Agraria site will allow easier access for villagers as well, Jennings said. She estimated the path will be complete within two years.

The local schools’ project-based learning, or PBL, curriculum is well poised for taking advantage of the environmental and agricultural learning opportunities there, leaders say. McKinney science teacher Rebecca Eastman, for one, is expanding the middle school’s “Project Bluebird” PBL onto the Agraria property.

The ultimate goal is that “Agraria will serve as a living laboratory for citizen scientists of all ages,” according to Community Solutions literature.

Toward that end, the organization plans eventually to construct an open-air Educational Pavilion, in addition to the existing 7,000-square-foot barn, to house classes as well as special events in the upper field of the property.

In addition to agricultural education, environmental concerns comprise an important thread in  Agraria’s plans, particularly restoration of two tributaries of Jacoby Creek, which run through the property.

The creek’s presence was “the reason why the land was important to the village and Tecumseh Land Trust,” both of which were instrumental in helping Community Solutions secure the funds to buy the property, Jennings said.

The land trust has described Jacoby Creek as a vital part of the designated greenbelt around Yellow Springs, noting that the creek provides drinking water for Xenia and impacts the Yellow Springs aquifer as well. The creek is a valuable “headwaters stream” for the Little Miami River, which has been designated a “Wild and Scenic River,” home to more than 87 species of fish, 36 species of mussels, an endangered turtle, an endangered salamander and numerous species of breeding birds, according to TLT’s Associate Director Michele Burns.

Agraria’s work on the creek will be in partnership with the Nature Conservancy, a national environmental organization. They’ll start by taking out invasive plant species and will follow with the major undertaking of re-meandering the stream, which had been straightened by previous owners.

In addition, much of the property will be replanted with native species. “The goal is to move to a more diverse” eco-system, from the “monoculture” of prior farming practices, Jennings said.

Soil regeneration, which had become an educational and research focus of the organization prior to the launch of Agraria, will remain a foundational effort on the property.

“Financially, we’re looking to support 60 percent of [the project] through business opportunities in five years,” she said.

Business activities will include the introduction of a native plant nursery and a seed, feed and soil enterprise. The group is also exploring trying to fill the gaps for small organic farmers, such as a tool rental business.

Organic farmers will also be able to rent land on the Agraria property. And pastured animals will help maintain the land and increase its diversity and sustainability.

“We want to nurture existing farmers and help new farmers get started,” she said.

The suggestion for the addition of a local, organic feed and seed source came from farmers, she said. Workers from Peach Mountain organic farm, for example, were driving 200 miles to get their seed.

“In a lot of ways I feel like the organization has come full circle in Agraria,” Jennings said.

Founded by Arthur Morgan in 1940 as Community Service Inc., the now named Arthur Morgan Institute for Community Solutions was meant to “promote interest and understanding in the need to consciously develop the full possibilities of community life in small towns, rural areas and cities,” according to the organization’s website.

Jennings said that five areas of continuing focus have emerged over time: resilient communities, regenerative land use, community economics, energy democracy and “being the change.”

Pragmatic idealism is the model, according to Jennings, and a major piece of that approach will be achieved through collaborations.

“We understand that having meaningful collaborations is really going to be key.” Educators will devise curricula, farmers will maintain fields, academics from area colleges and universities will pursue related research. “We don’t have to do everything.”

“I feel like we have a pallet of what we want to do,” Jennings added. “Our goal is now to dig deeper into those pieces.”

Most immediate is to complete the move of the organization’s offices from their current location on the Antioch College campus to the new property. Their goal is to be in place by the end of the year, in time to welcome the community for the open house Dec. 21.

“We really see Agraria as a community asset,” Jennings said.