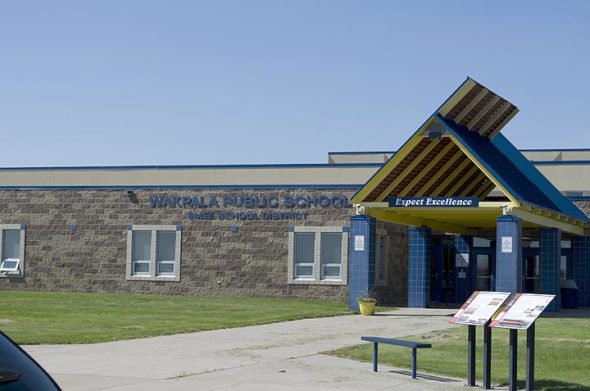 The Wakpala Public School on the Standing Rock Reservation in South Dakota is one of two schools to request school supply donations, to be delivered next week by Yellow Springs resident Bettina Stolsenberg. (Submitted photo by Bettina Solas Stolsenberg)

When Bettina Stolsenberg first traveled to the Standing Rock reservation in South Dakota two decades ago, she fell in love with the landscape and with the people.

While Stolsenberg hadn’t, until recently, made it back to the reservation since that time, she’s remained engaged with the Miami Valley Council for Native Americans, the group that sponsored the clothing drive that had originally taken her to the reservation. Each year she donated to the  drive, which has since morphed into a collection of not only warm-weather clothing but also school supplies, and she attended the group’s annual powwow.

The sixth largest Native American reservation in the country, Standing Rock is home to the Lakota and Dakota tribes.  It includes all of Sioux County, North Dakota, and Corson County in South Dakota, and has a population of about 8,200, according to Wikipedia.

A local freelance copy editor and singer/songwriter, Stolsenberg discovered in August that the annual drive to collect school supplies for the reservation had been canceled. Immediately, she said, she knew she had to fill in the gap.

“Something in me exploded,” she said of her need to pick up the slack. In two weeks, she collected enough clothing and school supplies to fill up an SUV, which she drove out to South Dakota by herself. Because she had rushed the first time, she knew all along she’d make a second trip to the reservation, with a second load of donations.

In a week, Stolsenberg plans to make that long drive again. She hopes to leave at about 4 a.m. on Saturday, Nov. 11, then drive 18 hours that day to her destination on the reservatiion, where she will arrive at about 10 p.m. Two of the reservation schools have requested the school supplies, she said, and she’ll help to sort the donations before returning home a week later.

Between now and then, she’s collecting donations. Like almost all reservations, parts of Standing Rock are plagued by longstanding poverty. While the local schools are in decent shape, having been constructed by the state, many children lack basic necessities.

Winter clothing items are also needed, to be delivered before the reservation’s brutally cold winter arrives. Especially needed are winter coats in all sizes, from infants to XXXL, hats, gloves and scarves.

Gently used items are welcomed, Stolsenberg said. Cash donations are also appreciated, and will be used to help cover transportation costs. Last time, while she initially planned to make the trip in her own ‘94 station wagon, she ended up renting an SUV, and was glad she did. She plans to do so again.

While the stress of poverty has been a constant on the reservation, a new stressor has emerged since President Trump signed a bill in January to move ahead with the Dakota Access Pipeline, a project that aims to transport oil between this country and Canada, and cuts through the land. After Trump took the step to move ahead with the pipeline, reservation residents are worried about the effects on their water supply, especially since the pipeline has already sprung three leaks since January.

“People are nervous,” she said.

Items may be dropped off in Yellow Springs at the First Presbyterian Church, in Xenia at Blue Jacket Books and in Dayton at SunWatch Indian Village.

Cash donations may be made directly to Stolsenberg, who can be reached at bettinasolas@yahoo.com or 769-5014.

One Response to “Donations sought for Standing Rock”