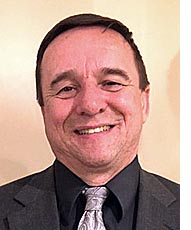 Mike Montgomery, currently the director of Grace Brethren Village in Englewood, has been named the new director of Friends Care Community. He’ll begin his new job on Dec. 4. (Submitted photo)

Leaders of Friends Care Community announced this week that Mike Montgomery, who currently heads an award-winning retirement center in Englewood, will be the new director of the Yellow Springs elder care community.

“Health care in the U.S. is always changing, but perhaps never so much as right now. So we were looking for an individual who will be a leader into the unknown future, but who could also fit into the unique culture we have here at Friends,” FCC Board President Bruce Bradtmiller wrote in an email this week. “We think Mike has the breadth of experience and creativity to be that leader. The board found Mike to be a very good fit with our values, and the Center staff agreed that he will be a good fit personally as well.”

Montgomery, currently the director of Grace Brethren Village, will begin his new position on Monday, Dec. 4. He will overlap for several weeks with current FCC Director Karl Zalar, who this year announced that he will reture on Dec. 31.

In an interview Monday, Montgomery said that leaving the Grace Brethren job was a hard choice, but that he was drawn to Friends Care as both a nonprofit and a health care center firmly rooted in the community.

“That it’s both faith-based and community-based appealed to me,” he said. “I feel like it’s a place that helps people.”

In the past, Montgomery said he has often taken jobs at facilities that need turning around, but in this case, he’s coming to one with a strong reputation.

“Friends Care already has a great reputation, and my job is to take it to the next level,” he said.

Grace Brethren Village is currently ranked #1 in Montgomery County for Family Satisfaction by the Ohio Department of Aging and has been named by U.S. News and World Report as one of the top 100 nursing homes in the country. Its 21-acre campus has 77 independent living cottages, four assisted living beds and a skilled nursing center with 45 beds. Montgomery has been the center’s director for 13 years.

Asked of what in his career he’s most proud, Montgomery talked of turning around financial instability at Grace Brethern without compromising patient care. He did so, he said, by cutting costs in other departments, renegotiating contracts with all aspects of the operation, including lawn care, food service and medications.

“Resident care improved as the financial status improved,” he said.

Montgomery replaces the retiring Zalar, who came on the job about a decade ago. Under Zalar, the FCC added the Rehab/Short Term Stay Unit, renovated the dining rooms in the longterm stay and assisted living units, replaced resident room flooring, renovated the courtyard and expanded the FCC’s independent living units, according to a statement from the FCC board of directors. He also oversaw the center’s transition to electronic systems for medical records, payroll and human resources.

According to the board’s statement, Zalar led the center “with steady and inspiring competence, strengthening the organization and promoting excellent care for residents and patients, as evidenced by FCC’s 5-star rating from the Center for Medicare and Medicaid Services.”

Montgomery and his wife have two children, a 21-year-old daughter and a 16-year-old son who is still at home. The family lives in Beavercreek and plans to continue living there, at least for the foreseeable future, but Montgomery said he’s a big fan of Yellow Springs, and has enjoyed hiking Glen Helen and the Clifton Gorge.

Friends Care Community was launched in 1980 at the instigation of the local Yellow Springs Friends Meeting, or Quakers. The project was the culmination of a longstanding dream, first articulated by former Antioch College President Arthur Morgan, that the village should have a venue where local elders could stay in their home community as they age.