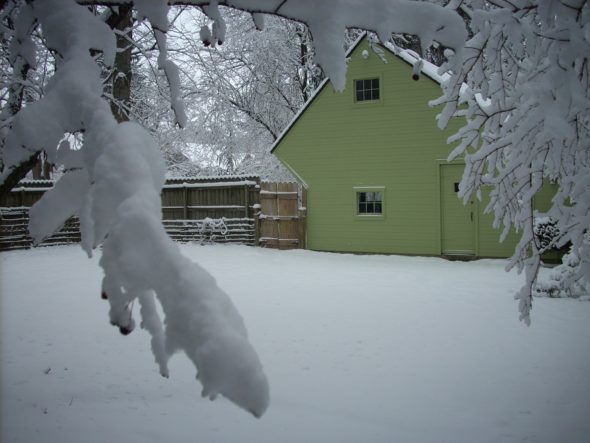 Our first winter in Yellow Springs. (Photo by Grant Hackett)

The first snow of the season fell Dec. 9, the day before my husband’s birthday. Though just half an inch, it was a grand gift.

Our first two winters in Yellow Springs were cold and snowy. What luck! We’d moved to a wintry pocket of Ohio. The home we were renting had a woodstove, an actual jolly Jøtul woodstove whose name it was impossible to say without chuckling, and a woodshed, an actual jolly woodshed. A wood cottage, really: cute, quaint, with a little peaked roof.

The wood cottage was located about 50 feet from the house, through our secluded backyard, and my husband tramped a path several times a day carrying armfuls of wood. Our little dog followed, or not. He spent most of the winter behind the woodstove, melting into the black firescreen. “Wait, where’s Skyler?” we’d ask each other. There he was — always hot to the touch, always groggy.

In memory, snow fell all winter those first two years. Our backyard became a closet stuffed with bridal gowns, frothy white forms smothering every bush and tree. I loved the stacked inches atop the clean curves of honeysuckle, and the transformed hemlock, a dark Pegasus spreading white wings. Every fencepost, every twist of wire gathered its own cache of snow. When the sun came out, the whole world glittered like a socialist version of Aladdin’s Cave — diamonds for everyone!

We took dazzling woods walks, our first exposure to the Glen. Exposure is the right word, for the dark and light stripes of trunks, shadows and snow suggested a black-and-white photograph, developing crisply around us. The kettle of turkey vultures we’d occasionally see, floating down from a sycamore’s white limbs to some piece of cold life in the snow below, did nothing to correct the impression that we had left Kodachrome behind. Even the pine forest was more black than green against the visual pressure of snow.

Life has a certain starkness in winter; is that what I love? A cleanness, oddly like the cleanness of the desert I’d experienced for the first time in New Mexico, before moving to Yellow Springs. Without greenery, the landscape is simplified. But not emptied. More like — held open for fullness.

I miss our first Yellow Springs house. I miss our “early years” in Yellow Springs. (Admittedly, we’ve only been here five years!) I’m an incorrigible nostalgic; even recalling the day before yesterday can give me a pang.

The day before yesterday was my husband’s birthday, a Sunday. We got up late, ate breakfast late, didn’t leave the house till noon. Which is pretty much my dream day — somehow I was the one who ended up with that particular birthday present.

The snow shrunk a bit but didn’t melt, leaving us wisps of winter. The day stayed cold. Our new house — we just this month passed the two-year mark — lacks a jolly Jøtul, a major deficiency, but is cozy in other ways. For one thing, it’s ours. And it’s beginning to fill up with the kind of drift that living brings.

Our fifth winter in, Yellow Springs isn’t quite as simple as it was. Our life here has ceased to be an open space, a blank. Even when it snows, it’s hard to pretend I’m starting with a fresh field; I know too much of what’s underneath. And it knows too much of me. But anyway, a fresh field is no longer what I want.

YSDC will meet via Zoom on Tuesday, June 2 at 4:30 p.m. Please send an email to Lmabel@yahoo.com to get Zoom link.