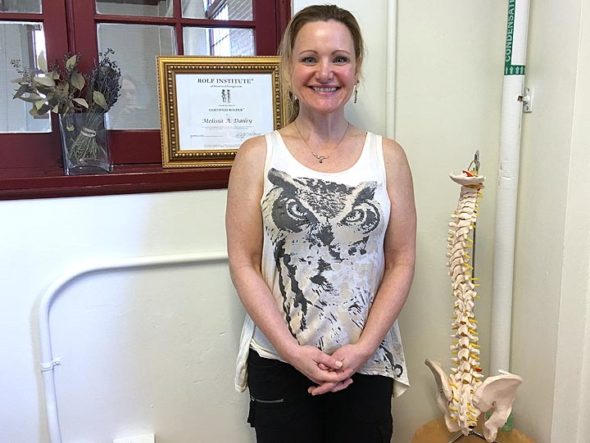 Melissa Dailey, a certified Rolfer, is shown in her office at the Wellness Center. (photo by Jeff Simons)

Bringing the body to alignment

Two thousand years ago, Marcus Aurelius encouraged his subjects to “stand up straight, not straightened.” While some historians believe he was conversing metaphorically, others believe the Roman emperor was speaking anatomically: people with healthy postural muscles don’t need to think about standing up straight; it comes naturally.

Melissa Dailey, a certified Rolfing practitioner at the Antioch College Wellness Center, knows a thing or two about posture.

“Poor alignment results in a plethora of biomechanical problems,” she said. “And Rolfing is a method that brings a person’s body back into proper alignment. It’s a way to restore one’s natural standing posture to a straight plumb line.”

Rolfing, often referred to as structural integration, is a form of manipulation therapy designed to holistically improve human functioning as opposed to treating specific symptoms or injuries. Ida Rolf, a biochemist, developed the basic principles of Rolfing in the 1940s. Her theories eventually led to the establishment of the Rolf Institute of Structural Integration, which has been based in Boulder, Colo., since 1972.

Rolf emphasized the importance of the human body’s fascia system — the sheets of connective tissue beneath the skin that envelop muscles and internal organs. One of Rolf’s core principles was integrating the body into alignment with gravity.

Dailey, 49, a lieutenant colonel in the Air Force Reserves, became a certified Rolfer in September after completing a rigorous program at the Rolf Institute in Boulder. Over a two-year period, in addition to studying anatomy, physiology and the basic principles of manipulation, most of her training involved hands-on experience with Rolfing’s Basic 10 — a graduated series of 60 to 90 minute sessions wherein a Rolfer systematically and physically manipulates a client. The 10 sessions can be conducted on a weekly or monthly basis.

When dealing with a new client, Dailey, who lives just outside of Yellow Spings, considers a person’s entire system. As a Rolfer she recognizes the fundamental connectivity of the human body.

“My arm is not separate from my leg because everything is connected through underlying sheets of fascia,” she said.” And it’s that connectivity that defines our bodies and the way our muscles and joints move in gravity over time.”

Her path to becoming a certified Rolfer started in her hometown of Kalamazoo, Mich.

“We were a poor family who lived behind a McDonald’s, and I’d eat there several times a day,” Dailey said.

When she was eight years old she was sometimes eating four Big Macs a day, and became overweight. And like many young people, her self-identity was wrapped up in how she looked and what other people thought about her.

“By the time I was in fourth grade I had no self-confidence at all,” she said.

But over time that all changed.

After high school, Dailey earned an undergraduate degree in international business and French from Ferris State University in Grand Rapids, Mich. That led to a master’s in bicultural and bilingual studies from the University of Texas in San Antonio. During her 24-year career in the Air Force she earned a master’s of Military Art and Operational Science. In her active duty years Dailey worked in a variety of capacities, including an assignment as a senior analyst for counter terrorism.

In 2002, she served as a U2 operations commander at Beale Air Force Base in California.
“Those were 16-20 hour days evaluating satellite images,” she said. The pressures of the job and lack of sleep created an enormous amount of stress.

“In the Air Force we have these principles: service before self; excellence in all that you do; integrity,” Dailey said. And that presented a quandary.

“I couldn’t put service before myself if I wasn’t taking care of myself. These things are not incongruent. I was a mess.”

At that point Dailey felt she was living an incongruent life, and that’s what brought her to Rolfing.

While Rolfing is experiencing resurgence, it is, nevertheless, controversial. In a Dec. 6, 2012, NPR Morning Edition broadcast, Sarah Varney reported that many researchers she spoke with claimed that Rolfing is a theory largely taken on faith.

But others have found it helpful. Phil Jackson, former Los Angeles Lakers coach, said that for him Rolfing is a valuable resource for maintaining good health.

Steve Diebold, 62, a Yellow Springs resident, has had three Rolfing sessions with Dailey. He works for a company that organizes convention size trade shows in Ohio and Kentucky. It’s a job that involves a lot of walking across concrete floors—sometimes eight to 10 miles a day.
“I’ve had issues with my right foot and shoulder,” he said. Over the years he’d developed an abnormal stride pattern, landing on the side of his foot, as opposed to a correct heel-toe pattern. He said that his wife, Molly, who works at Town Drug Pharmacy and has had seven sessions with Dailey, convinced him to try Rolfing.

“My first session with Melissa had to do with breathing and its connection to my body,” he said. “By the third session she’d figured out that my shoulder pain was related to my neck. She’s diagnosed my whole body structure.”

Diebold said that through manipulation Dailey had realigned some of the muscles in his body.

“Melissa opened my awareness to how I was walking, which was essentially walking hunched over. She’s now working on details, and I’ve noticed a major change. Now when I walk I pay attention to the heel to toe pattern.”

Dailey said that when she was first Rolfed she came face-to-face with some of her old patterns — patterns that needed to change.

“People who are Rolfers were transformed when they were first Rolfed,” she said. “It’s hard to explain, but you just have to allow other people to experience it. And I’m really grateful to have the opportunity to do it in this community.”

6 Responses to “Bringing the body to alignment”