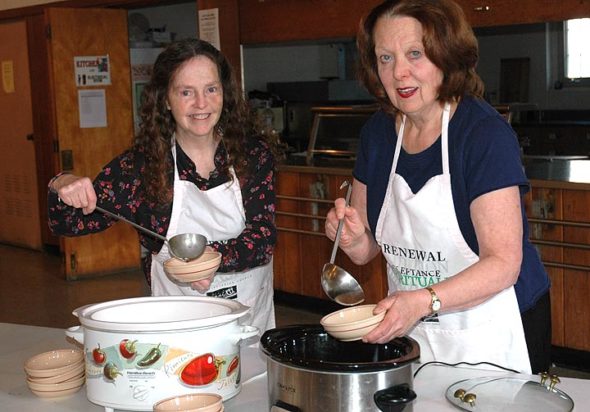 Villagers Theresa Mayer, left, and Barbara Boettcher are the organizers of an upcoming soup supper fundraiser for Puerto Rican disaster relief. The supper will be held Wednesday, Dec. 6, from 5:30 to 7:30 p.m. at First Presbyterian Church. Suggested donations are $10 adults, $5 children. (Photo by Audrey Hackett)

“We shifted the prayer focus,” she said recently.

But when Hurricane Maria hit just a few weeks later, her prayers were back with the dozen or so members of her family who live on the island, where her mother was born. Because the hurricane devastated local infrastructure, knocking out cell service, she and other stateside relatives had to wait almost a week to hear from family members on the island.

Thankfully, everyone in her family pulled through. In the hurricane’s aftermath, a couple of her relatives decided to relocate to Florida, while the rest “are staying there and making it work,” she said.

Two months after the disaster, another Yellow Springs resident, Barbara Boettcher, is worried that Puerto Rico’s plight could be forgotten by those without direct connections to the island. A former resident of New York, home to a large Puerto Rican community, she has friends of Puerto Rican heritage, but no personal ties to the island. Still, she’s followed the news, and wants to help.

“I’m moved by the fact that Puerto Rico is still suffering so much,” she said recently. “They need a great deal of help and are not getting enough.”

She’s been especially frustrated by the disparity she sees in the federal response to hurricane damage in Texas and Florida versus Puerto Rico.

“So much help was mobilized for Florida and Texas … and now they’re doing well,” she said. “Puerto Rico is still in a state of emergency after two months.”

The island is a U.S. territory, and residents are U.S. citizens.

A retired lawyer active in First Presbyterian Church, Boettcher spoke with fellow church member Theresa Mayer, who is part of the church’s mission outreach committee. The committee does charitable work in the community, and is looking to expand its reach and take on new projects, according to Mayer.

The two women came up with the idea of a soup supper to raise funds for Puerto Rican disaster relief. The supper will be held Wednesday, Dec. 6, from 5:30 to 7:30 p.m. at First Presbyterian’s Westminster Hall. Mayer and others will be cooking Crock-Pots of soup, both vegetarian and with meat. Salad, bread and dessert will also be on the menu. Suggested donations are $10 for adults, $5 for children. Those interested in contributing to the effort by preparing dishes for the supper may contact the church office at 767-7751.

The money raised will benefit two or three organizations doing work on the ground in Puerto Rico, still to be determined. Possible recipients include the American Red Cross and the Hispanic Federation, a leading Latino nonprofit. Boettcher said she is open to suggestions from attendees regarding other worthy relief organizations.

The hurricane devastated the island’s infrastructure, depriving people of electricity, food, drinking water and medical care. More than half of Puerto Rico is still without electricity. The scope of the damage was akin to a bomb going off on the island, according to statements from Puerto Rico’s governor, Ricardo Rosselló.

It will likely take years to rebuild. Gov. Rosselló has requested $94.4 billion in recovery aid from the federal government; so far, Congress has approved just $5 billion. And President Trump has been widely criticized for his negative comments about island leaders and workers, as well as for the federal government’s lackluster response to the disaster.

“I’ve been disappointed and, candidly, disgusted by some of the statements coming out of the White House,” McGuire said.

By contrast, she’s been gratified by the outpouring of support from the Dayton area, and across Ohio and the nation.

“It has been profound and inspiring,” she said.

Just after the hurricane hit, McGuire helped facilitate the collection of donations at the Bryan Center in support of a drive coordinated by Wright State University’s Latino affairs office. Similar donation efforts happened around Ohio, which has small but active Puerto Rican communities in Dayton, Columbus, Cincinnati and Cleveland, in addition to a sizable community in the former mill town of Lorain in northeastern Ohio, according to McGuire.

Another Yellow Springs resident with Puerto Rican heritage, Karl Colón, executive director of Greene County Public Library, said he has been grateful for the concern and support of friends and colleagues.

“I have been asked by so many kind people what’s going on, is my family okay,” he said.

And according to Colón, members of the area Puerto Rican community have been greeting each other not with “hi” these past weeks, but with the anxious query, “What have you heard?”

Colón’s father was born in Puerto Rico, and many members of his family remain there. After Hurricane Maria, it took Colón weeks to make contact with some relatives on the island. Just pieces of texts came through, as people were able to briefly charge their cell phones. It was a nerve-wracking time.

“I lost what little hair I had left,” he joked.

One of his family members, an elderly aunt, took a fall and broke a leg after the hurricane hit. But without reliable communication, stateside relatives didn’t know right away that she was hurt. And then the challenge was figuring out how best to help.

“You want to saddle up and head down there, but more people showing up on the island is not necessarily going to help,” he said.

Fortunately, his aunt is now safely in Florida with her daughter recuperating — the best possible news the family could have gotten for Thanksgiving, Colón said.

Loyalty to the family — la familia — is an essential component of Puerto Rican culture, both McGuire and Colón said. And that sense of family extends beyond blood relations to those within a person’s broader community, according to McGuire.

“We have our brothers’ and sisters’ backs,” she said.

Just after the hurricane, she hung up a Puerto Rican flag outside her Yellow Springs home. Two months later, it remains there.

“I don’t see it coming down anytime soon,” she said. “We’re keeping them in our hearts.”

And that’s what the soup supper is doing, too, according to Boettcher and Mayer. The effort is modest, but the organizers hope villagers will step up and take part.

“Every little bit helps,” Mayer observed. “It takes a lot of sand to build a beach.”