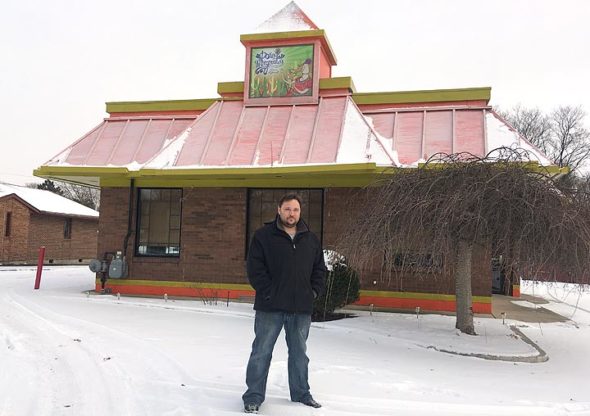 Brian Rainey, owner and chef of the Sunrise Cafe, recently announced that he’s opening a second restaurant, the Calypso Grill and Smokehouse, that will feature Caribbean food. The restaurant, which is scheduled for a March opening, will be located in the former location of Dona Margarota’s, a Mexican restaurant that closed in November. (Photo by Jeff Simons)

When one door closes, oftentimes another opens.

Last November, when Tony Avalos closed his Mexican restaurant, Doña Margarota’s, for remodeling, he wasn’t sure about its future. Or the future of the 1535 Xenia Avenue building — site of the former KFC — he’d purchased in 2014. But after meeting with Brian Rainey, who’s owned the Sunrise Café since July 2004, the two restaurateurs struck a deal. Rainey would lease the building from Avalos and then open a new restaurant, with a new name: the Calypso Grill and Smokehouse.

“It will be a Latin-Caribbean restaurant, with more of the emphasis on the Caribbean,” Rainey said. “We’ll be specializing in jerk chicken, along with Cuban, Colombian and Brazilian recipes.”

He’s planning to open for business sometime in March.

Rainey, who has been cooking professionally for more than 20 years, said he became obsessed with the whole jerk-chicken idea ever since he went on vacation a couple of years ago in the Cayman Islands.

“I met a guy who had a roadside jerk chicken stand,” he said. “And ever since then I wanted to bring it to Yellow Springs. It was kind of a dream.”

Rainey doesn’t seem too concerned that his new restaurant’s location on the southern edge of town will be a business impediment.

“The talk of the town is, that’s the location where restaurants go to die,” he said. “It won’t have that tourist foot traffic that you see in the summer. And that’s what makes most of the downtown businesses. You don’t have people walking around on that section of Route 68.”

Nevertheless, Rainey thinks that initially people will come for the Mexican restaurant but then find there’s something similar and give it a try. Success, he believes, comes down to the kind of food being served.

“People in Yellow Springs like good food, and that’s what we’ll be serving,” he said.

Along with the new cuisine, the Calypso Grill and Smokehouse will have a liquor license.

“We’ll still be serving the kinds of Margaritas that people are accustomed to, plus we’ll be serving a lot of rum drinks,” he said.

When he opens in the spring, Rainey hopes to employ 10 to 12 people, with the emphasis on hiring as many locals as possible.

Opening a new bistro is a risky venture. For an aspiring restaurateur, there’s no foolproof recipe for success.

A longitudinal study conducted by H.G. Parsa, associate professor of hospitality management at Ohio State University, concluded that approximately 60 percent of new restaurants were out of business within three years. And according to an article published in Business Insider in 2014, 80 percent go under in five years.

Based on those statistics, Lawren Williams, who owned the Williams Eatery on the corner of Dayton and Corry streets, did pretty well. He opened in July 2008 and over the next nine years served up a variety of dishes that included traditional Peruvian entrees like cebiche, pasta vegetariana, and tallarines verdes with bistek.

His menu also featured Cuban-style sandwiches, crabmeat salads, and what he described in a 2008 News story as American classics such as “great-hot-smokin’-fall-off-the-bone ribs.”

Unfortunately, Williams had to call it quits on Dec. 23.

“We closed because there was a downturn in business,” Williams said. “Things were getting slower. It was just not possible to keep the doors open.”

One reason Williams decided to close in December had to do with his lease with Drenko Pureval, who owns the building and the Tibet Bazaar Gift shop in Kings Yard. Pureval was not available before press time to discuss the building’s future use.

“For us, every winter was like feast or famine, and I didn’t know if I was going to survive the season,” Williams said. “Since my lease was up at the end of 2017, there was no sense in trying to push a rock uphill.

“It was better to close than to sign another long-term lease when you know you’re struggling to make it right now. I didn’t want to be forced out of business. I kind of did it on my own terms. I figured that was better than to have someone come in and lock the doors on me.”

In its heyday, the Williams restaurant employed more than 20  people.

“One of our mantras was, ‘fresh ingredients first.’ We always tried to buy high quality food and prepare great dishes from that.”

But as business slowed he had to lay off most of his staff.

“This past year we didn’t have as great a summer as we normally had,” Williams said. “The writing was on the wall.”

By early December the restaurant was down to five employees.

Williams, who lives in Fairborn and has been in the restaurant business for thirty-five years, is one of the co-owners of the Corner Cone Dairy Bar and Grill and Bike Rental on Walnut Street. Prior to opening the Williams Eatery, he worked in several corporate chain restaurants and was the former owner of the Broad Street Grille in Fairborn.

Despite having to close shop, Williams feels good about the role his business played in the community.

“The main thing I want to get out is that I want everyone to know we were very thankful for all the people who came to the restaurant,” he said.

While Williams has no long-term business plans other than the Corner Cone, he feels that a resourceful person could pick up where he left off.

“Yellow Springs is a wonderful community with a ton of great people, and they deserve a restaurant that provides great food,” he said. “I hope that someone with an entrepreneurial spirit will give it a try. I was able to make it work for almost ten years.”

One Response to “Changes come to two village eateries”