New Council members Lisa Kreeger and Kevin Stokes, along with returning Council member Brian Housh, were sworn in by new Mayor Pam Conine. Kreeger and Stokes are filling the seats formerly held by past Council President Karen Wintrow, who stepped down after 12 years on Council, and Gerry Simms, who retired after six years.

In addressing a document on Council rules and procedures, President Housh stated his intention for shorter Council meetings, with two-and-a-half hours as a proposed time frame. In recent years, Council meetings have most often lasted three or more hours.

Kreeger agreed that it’s necessary to keep meetings to a reasonable length if Council wants to engage the public, which she believes is important.

“It’s important to keep meetings to a length that citizens can commit to,” she said.

Council member Judith Hempfling agreed, with the stipulation that if Council is addressing a topic that includes considerable citizen input that goes longer than the scheduled time, that Council have the option to extend the meeting to accommodate citizens, or else move other topics off the agenda.

Council members also discussed the upcoming annual Council retreat, which takes place from 8 a.m. to noon on Wednesday, Jan. 10, in room B 102 at Antioch University Midwest. The retreat, while not televised like regular meetings,  is open to the public.

It’s likely that Council will hold a second half-day retreat later in the year, if the discussion requires more time, according to Housh. 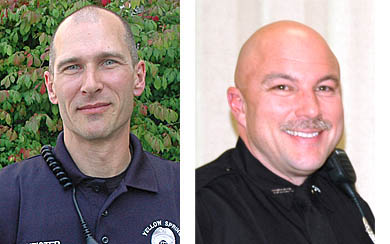 Current Officers David Meister, left, and Jeff Beam were recently promoted to positions of corporal in the Yellow Springs police department. They will have supervisory responsibilities.

In his regular report, Police Chief Brian Carlson announced that two new positions of corporal have been created in the department, and that Officers Dave Meister and Jeff Beam will hold those positions.

“I think they’ll do an excellent job,” Carlson said.

The corporals will perform supervisory roles during their shifts, Carlson said in an interview Tuesday, and will be between officers and sergeants in the police department chain of command. Josh Knapp and Naomi Watson are currently sergeants in the department.

The new corporal positions were established in order to give local officers more opportunity to advance in the local department,  and thus to stay in the department longer, according to Carlson, who became chief in June of last year.

“I really want to put together a department that offers movement for officers and can work,” he said.

The positions come with a 2 percent pay raise, which is added to the 2-and-a-half percent cost of living raise that all Village staff are receiving this year.

Meister and Beam were chosen for the positions because they exhibit good character and align well with local values, Carlson said, stating that both tend to see their role as helping to resolve disputes rather than to correct behavior.

Meister, the longest-serving full-time officer in the department, has been with Yellow Springs police almost eight years. Starting out as a biologist with the Washington State Fish and Wildlife Department when he lived in the Pacific Northwest, Meister became more interested in law enforcement after working as an officer in a small Washington town. Shortly after he and his wife, Zo Van Eaton-Meister, moved back to Yellow Springs in 2009 with their four children, he joined the local department.

Beam has been with the Yellow Springs department since 2014. He started out his working life in the field of electronics, then at age 40 felt drawn to law enforcement. After graduating from the police academy, he began his job in Yellow Springs. He and his wife of 26 years, Lora, who have grown children, live on the Beam family farm in Caesar Creek Township, he said, in an interview Wednesday.

In his report to Council, Carlson stated that nine individuals had applied for the two open officer jobs, and six of those had recently passed the required tests, with several returning for more interviews next week.

The department is also advertising for a 30-hour a week community outreach worker, a social work position that had been recommended by the Justice System Task Force, or JSTF.

Council members also reviewed recommended changes in the department’s use of Tasers, also suggested by the JSTF. While Council had approved the recommendations earlier in 2017, they have not yet been passed as legislation, a step that Village Solicitor Chris Conard urged Council to take. The legislation will return to Council at its next meeting.

The main change involves the approved use of Tasers. According to a memo to Council from JSTF member Ellis Jacobs,  current training appears to encourage officers to depend on Tasers for compliance purposes. However, the recommended use is only “to protect life or prevent serious injury,” and in situations with individuals “who pose an immediate threat of serious injury or death to themselves, the officer, or others.”

The new recommendations also allow Taser use in situations “that may escalate to deadly force.”

The new recommendations do not approve Taser use “solely to secure compliance with orders or instructions or where the sole purpose is to facilitate taking a subject into custody.”

The recommendations also provide guidelines for where on the body officers should aim Tasers, and that they not be used on vulnerable populations.

The recommendations were made in accordance with sources such as “The National Consensus Policy on the Use of Force,” according to the memo from Jacobs.

Council members agreed with the recommendations and the need to pass legislation. Kreeger noted the importance of training in helping officers identify the appropriate situations for Taser use. She also thanked JSTF members for their work.

In other Jan. 2 Council business:

• Council unanimously passed legislation that amends language in the current covenant for the Center for Business and Education, or CBE, to align with Ohio state law. The action is necessary so that Cresco Labs, which is set to build a new facility for the cultivation of medical marijuana on the property, could close on the purchase of the property and begin construction, according to Patti Bates.

• Council unanimously approved a resolution that allows Village staff to sell Village-owned personal property that is no longer needed or is obsolete, if the need arises during 2018.

• Council began a discussion on possible conflicts of interest for Council members who serve as liaisons on Village boards or commissions if a family member is also on the board. The discussion, brought forward by Hempfling, was sparked by a situation involving the JSTF, on which she is Council liaison and her son is a member.

While the controversy initially prompted her to think that Council members should not be liaisons on boards on which a family member serves, she has recently reconsidered that position, Hempfling said. She questions how allegiances to family members are different from those to good friends, and asked Council members to consider the complexity of people’s interrelationships in a small town.

“Where do we draw the line?” she asked.

In response, Marianne MacQueen said that she sees a difference in the way family members might feel the need to protect each other, compared to how friends relate to each other. Kreeger agreed, stating that even if a Council liaison is completely unbiased in a situation that involves family, the perception of bias remains.

Hempfling also asked Council to respond to what she perceives as a personal attack by a JSTF member on another member, who happens to be her son, who himself was accused of personally attacking another JSTF member. While her son apologized for his action, the second attack went without a response or an apology, she said.

“I think it’s important that Council be consistent,” she said, urging Housh to write a letter to the second JSTF member, who has resigned from the group.

Council agreed to continue the conversation at its upcoming retreat, and Housh offered to attend the next JSTF meeting and “put something in writing.”

While the recent controversy did affect the functioning of the JSTF for a period, board members are functioning together well again, Hempfling said.

• During the Citizen Concerns portion of the meeting, Mills Park Hotel owner Jim Hammond expressed frustration with  what he perceived as actions required of lodging owners to comply with the recently approved Village transient guest tax. At MacQueen’s encouragement, Hammond agreed to meet with Village Manager Patti Bates and Assistant Manager Melissa Dodd to clarify expectations.

• Manager Bates announced that the new Village water plant, long in the making, has recently gone online. She thanked Village staff for their efforts.

“Kudos to everyone,” she said. “It’s been a long road but we are there.”

She also encouraged villagers to be alert that their water softeners may need re-adjusting, since Village water will now require less softening than previously.

• Public Access Station Manager Susan Gartner, who is leaving her job, thanked Council and Village staff for their support during her tenure.

• Council’s next regular meeting is Tuesday, Jan. 16, at 7 p.m. at Council chambers. It is postponed from its usual Monday date due to the birthday of Dr. Martin Luther King Jr.