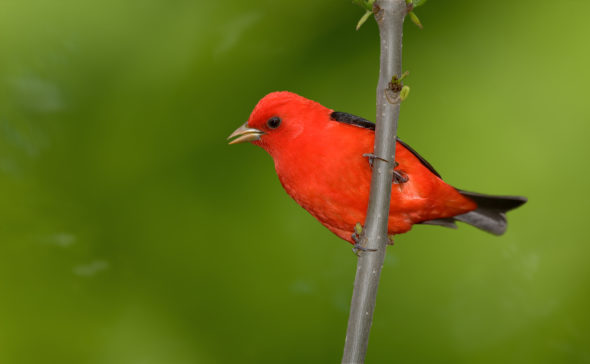 A male scarlet tanager in brilliant summer plumage. One scarlet tanager (in subdued winter plumage) was spotted in the local Christmas Bird Count, held Dec. 16. Results of that count were recently announced. (Photo via Wikipedia)

You said how many birds??

The local Christmas Bird Count results are in!

Local birding enthusiasts fanned out across area parks, wetlands and beyond on Dec. 16, with the mission of counting and identifying every bird they saw. Participants found 4,180 birds, representing 60 species.

Most unusual species? Easily the scarlet tanager and house wren, Boutis said. One of each was spotted, in John Bryan State Park and Phillips Park (in Beavercreek), respectively. The scarlet tanager, a brilliant bird of the summer woods, is less obvious in the winter, when males’ plumage subdues to olive green and yellow. While both species breed here in the summer, they migrate out of our area in the fall.

Most numerous, surprising no one, were the ubiquitous European starling and Canada goose. Local favorites among the “big birds” included two great blue herons and 34 sandhill cranes. Sandhill cranes are a newcomer to our skies in the past 10 years, and the local bird count reflects that change, according to Boutis in a previous interview with the News.

This was the eighth year the Glen and local birders have participated in the Christmas Bird Count, an annual early-winter census of the birds of the Western Hemisphere organized by the Audubon Society. (Read an account of the 2015–16 local count here.) Tens of thousands of people across mostly North America count birds over the Christmas season in their local areas. The data from our Greene County count is pooled with those numbers to develop a long-term picture of the health of bird populations in our hemisphere.

And that data is helping to document the effects of climate change and other threats to birds. According to the Audubon’s 2014 Climate Change report, more than half of the 588 North American bird species are losing their climatic range.

The final tally of species from the Greene County bird count follows: