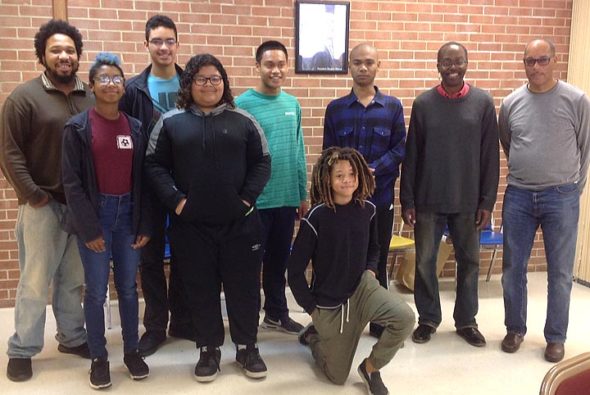 Members of the Young People of Color with leaders The 365 Project that formed it at a reception in 2017. From left is Steve McQueen, Malaya Booth, Joaquin Espinosa, Bayden Jordan, Ibi Chappelle, Malcolm Blunt (kneeling), Sulayman Chappelle, Kevin McGruder and John Gudgel. The 365 Project is celebrating its 10th anniversary on Sunday, March 18. (Photo by Kensy Zelaya)

Celebrate 10 years of The 365 Project

The 365 Project has worked for a decade to engage the Yellow Springs community on the issue of racism, preserve and celebrate the achievements of local black people and mentor young people of color growing up here.

The nonprofit is celebrating its 10th anniversary at 3 p.m. on Sunday, March 18, at Central Chapel A.M.E. Church, 411 S. High Street. A short program honoring three local civil rights trailblazers — Paul Graham, Isabel Newman and Phyllis Jackson — will be followed by a reception. The event is free and open to the public.

As an all-volunteer organization, The 365 Project has accomplished a lot since 2008. It has screened films, organized black history tours led by local youth, started an online encyclopedia of notable black residents and organizations, formed the Young People of Color group, helped revive Kwanzaa in Yellow Springs, hosted forums on the African American experience such as “Elders Speak” and “Growing Up Black in Yellow Springs,” and led interactive discussions at schools and community groups on matters of race, among other activities. And it has done so year-round, as its name implies, rather than only during Black History Month.

For co-founder and longtime village resident Jocelyn Robinson, in addition to its many accomplishments, the longevity of The 365 Project is worth celebrating.

“I’m proud that something we knew needed to be a part of the civic life of this community is going strong,” Robinson said.

The current board of The 365 Project is John Gudgel (president), Kevin McGruder, Joan Chappelle and Deborah Henderson.

Read the March 15 print edition of the News for the full story.