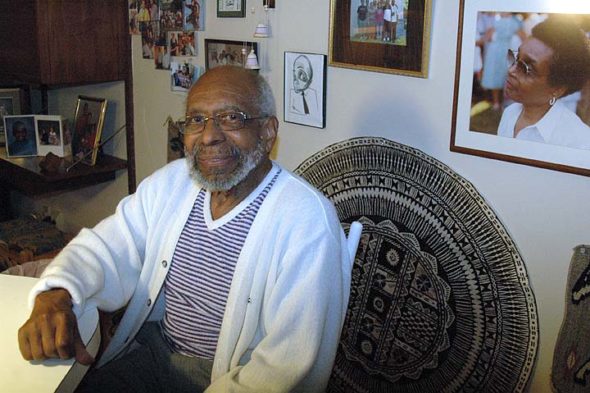 Longtime villager Paul Graham is shown in the kitchen of his Corry Street home surrounded by photos of family, including his late wife, Jewel, at right. Graham played a major role in integrating downtown businesses in the early 1960s. (Photo by Diane Chiddister)

A soft-spoken and gentle man, Paul Graham doesn’t seem like a troublemaker. Yet in Yellow Springs a half century ago, Graham made considerable trouble for those who stood in the path of equal rights for all. Thanks to the efforts of Graham and other civil rights activists, Yellow Springs in the early 1960s became a community where there was no place for racial -segregation.

A man who shies away from attention, Graham, now 87, reluctantly found himself in the spotlight when he agreed to be a test case for the Yellow Springs Committee for Fair Practices, the local group of blacks and whites working for civil rights. The group sought a black man to ask for a haircut from white barber Lewis Gegner, who refused to serve blacks. While other local businesses that had previously had discriminatory practices had bowed to pressure from the committee, Gegner was the lone holdout.

“He contended he didn’t know how to cut the hair of blacks,” Graham said in a recent interview. “It was a sham.”

So one morning in December, 1961, Graham, at the time a chemist at Vernay Laboratories, walked into the shop and politely asked for a haircut, accompanied by a witness, Hardy Trolander. Gegner turned him down, and Graham left the shop. He tried again several times, with the same result. Shortly after, the group filed a complaint with the newly created Ohio Civil Rights Commission.

The case took several years, going through several appeals before ending up at the Ohio Supreme Court. During this time the Gegner shop was the site of weekly protests out front, similar to the weekly antiwar vigils on Xenia Avenue, Graham said. The struggle gained national attention, to the point that Graham appeared on the “Phil Donahue Show,” which was then filmed in Dayton.

“Yellow Springs was the focal point of the civil rights movement in Ohio at the time,” he said.

Graham’s efforts came at a cost. Some in Yellow Springs refused to speak to him, and he and his wife, Jewel, began receiving threatening letters and phone calls. The worst, Graham said, were those that included veiled threats to their two young children.

“It was very difficult, really,” Graham said. “It was more than I had bargained for.”

But he persisted. Several years later, in 1964, the effort culminated in a large downtown protest in front of Gegner’s shop organized by Antioch College students, who barricaded the street. Law enforcement officers from surrounding towns flooded the village, and many were arrested. After that, Gegner closed his shop and moved away, and the Civil Rights Commission dropped the case.

“It was a relief, really,” Graham said of the turn of events.

The Gegner incident was neither the first nor last time Graham stood up for racial equality. Growing up in segregated West Dayton, he and several high school friends wrote a letter to the editor of the Dayton paper protesting segregated practices at their school.

“I’ve been an activist since early on,” he said.

Graham’s parents, both raised in rural Kentucky, had moved to the Dayton area as part of the mass migration of blacks from the rural south to the industrial north. His father reached high school before dropping out and his mother dropped out before high school. Graham’s father ended up working as a janitor in the tallest building in Dayton.

While his parents had limited education, they encouraged their son in school, and the gift of a chemistry set in middle school captured Graham’s interest. He was steered toward Antioch College, which he knew nothing about, by his high school counselor, a friend of Antioch’s Jessie Treichler, who was working to bring more blacks to campus.

Entering Antioch in 1947, Graham was one of about six or seven blacks out of an enrollment of about 1,000. The others included Coretta Scott, later Coretta Scott King, and her older sister, Edith King.

To Graham, being one of the few blacks on campus wasn’t as daunting as the class differences he saw.

“Many students were from the East Coast, from well-to-do families,” he said. “It was a transition.”

But his experience at Antioch was a good one, although he was disappointed when his first co-ops kept him on campus in the college chemistry lab, rather than experiencing new places, a situation he suspected was linked to the reluctance of many companies at that time to hire professional blacks. But later he went on co-op to Chicago, where he worked under the well-known research chemist Percy Julian, who had been one of the first blacks to get a Ph.D. in chemistry.

After Antioch, Graham  planned to pursue a Ph.D., and began his studies at Indiana University in Bloomington. But his life changed forever when, visiting his home in Dayton, he was asked to go on a blind date with his friend’s friend. Graham’s date, the first and last blind date in his life, was with Precious Jewel Freeman, who was in grad school in Cleveland at the time. A year later, they married, although Graham continued his studies in Bloomington while Jewel worked as a social worker in Detroit. But their long-distance marriage quickly changed when Jewel became pregnant.

The couple moved to Yellow Springs, where Graham had been offered a job as assistant chemist at Vernay Laboratories. He’d worked on a co-op in college at Vernay, and was pleased to get what he believed was a temporary job.

There were many reasons for staying on. The work environment at Vernay was dynamic and exciting, since founder Sergius Vernet was a “very liberal, very forward-thinking” leader who staffed his company with employees diverse in gender, race and nationality. And Vernay was one of the few unionized companies in the area  —  even more unusual, Sergius Vernet had brought the union to the company himself, when he thought it would benefit his workers.

Graham rose in the company, moving from assistant chemist to chemist to vice president of research.

Vernay was unusual among small rubber companies in having its own laboratory and developing its own products, according to Jim Bailey, a longtime employee in the company’s research and development division. And Graham was a critical piece of that process.

“He directed a lot of the experimentation that was a part of the strength of the company,” Bailey said.

Graham was known for his quiet decency and steadiness, according to Bailey, who also knew him as someone who gave thoughtful answers to difficult questions.

During this time, the village was a good place to raise Robert and Nathan, the Grahams’ sons. It was a small midwestern town of unusual racial diversity, partly because many professional blacks who worked at Wright Patterson moved to Yellow Springs when they couldn’t find housing elsewhere.

The diversity made for a vibrant social scene, according to Graham, and blacks and whites often socialized together. Some of those friendships, such as the long friendship between the Grahams, Trolanders and Agnas, began in the struggle for civil rights and grew over time.

The role of women was changing, too. If Jewel Graham was unusual among women of her time in choosing a professional path, Paul Graham was also unusual in being a husband who supported his wife’s career.  As her sons grew older, Graham, who had trained in social work, was invited to teach at the college, and later she created a social work major at Antioch, then presided over that department. At age 50, Jewel Graham entered the University of Dayton Law School, believing she needed a greater understanding of the legal aspects of her profession in order to teach. She later went on to become the international president of the YWCA, and traveled all over the world.

Jewel Graham could not have led the full and interesting life she led without an encouraging partner, according to retired Antioch College Professor of Religion Al Denman, a good friend of Jewel’s.

“Jewel would not have been the person she was without Paul,” Denman said in an interview this week. “The two of them were very close and he was so supportive.”

As well as having busy work lives, the Grahams contributed to the village in many ways. Together with several others, they co-founded the spiritual group that has evolved into the Yellow Springs Unitarian Fellowship.

Paul and Jewel retired in 1994, after which they began spending three or four months a year in the Bay area of California, where both sons and their families now live. A year ago, after 62 years of marriage, Jewel died. Paul lives on now in the modern home they built 60 years ago on the corner of Corry Street and Hyde Road.

Paul Graham misses Jewel and his longtime friends, like the Trolanders, who also have died. But he maintains other good friendships, and he stays active. He’s a member of the Jim McKee Group, the advisory committee for the Wellness Center and the development committee for the Yellow Springs public schools. He works out several days a week at the Wellness Center, attends a tai chai class and a movement class for those with Parkinson’s disease.

While his level of activity might be considered high for most 87-year-olds, for Graham it feels like slowing down. The Parkinson’s produces tremors and problems with balance, although the disease’s progression has been quite slow, a circumstance that his doctor attributes to his high level of physical activity.

In a few weeks, Graham will fly out to San Francisco, where he’ll stay over the winter months. Friends sometimes ask if he’s planning to move out to California full time now, to be closer to his children and grandchildren.

But while Graham loves the time with his family there, he is clear that he’ll always be coming back to Yellow Springs.